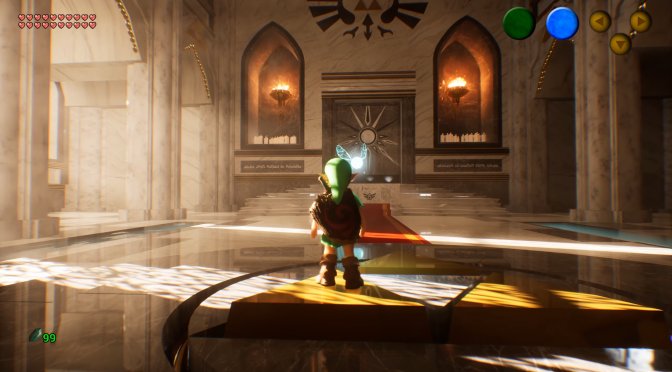 CryZENx has released a new video, showcasing 12 minutes of gameplay footage from his The Legend of Zelda: Ocarina of Time fan remake in Unreal Engine 5. In this video, we get to see an updated/expanded version of the Temple of Time.

What’s also interesting here is that CryZENx has changed Link’s face. The artist has recreated it from scratch, based on the 3D shape of the original model.

For those wondering, there is still no public release of this UE5 project. However, you can head over to CryZENx’s Discord server and download its free Unreal Engine 4 version.

Speaking of Unreal Engine 5, we also suggest taking a look at the following videos. Right now, you can download a Superman UE5 Demo, a Halo 3: ODST Remake, and a Spider-Man UE 5 Demo. A few hours ago, we also shared a demo of a fan remake for The Lord of the Rings: Conquest in Unreal Engine 5. Moreover, you can find UE5 recreations of Resident Evil, Star Wars KOTOR and Counter-Strike Global Offensive. Additionally, you can find a Portal Remake and an NFS3 Remake. And finally, here are Half Life 2 Fan Remake, Oblivion fan remake, World of Warcraft remake, Skyrim remake, Grand Theft Auto San Andreas Remake, Doom 3 Remake, God of War Remake and GTA IV Remake.