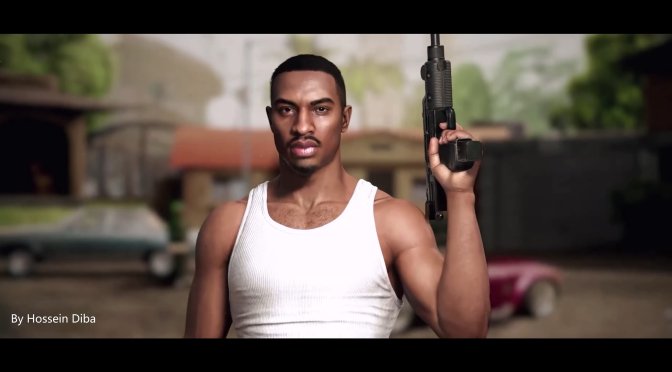 TeaserPlay has shared a video, showcasing what a remake of Grand Theft Auto San Andreas could look like in Unreal Engine 5. This video can give you an idea of what Rockstar could achieve with a full remake of this classic GTA game.

TeaserPlay claims to have recreated Grove Street in Unreal Engine 5. Additionally, they have used a 3D model of CJ that Hossein Diba has created.

The end result is truly amazing, and you really need to watch this video. This fan remake looks just as good as most modern-day games out there. Of course, everything in this video is “smoke and mirrors” (as TeaserPlay has simply created a small environment, and not an entire game). Nevertheless, it can give you a glimpse at what a proper remake of GTA San Andreas could look like. Also, and for some weird reason, I got some Battlefield Hardline vibes from it.

Speaking of Unreal Engine 5, we also suggest taking a look at the following videos. Right now, you can download a Superman Unreal Engine 5 Demo and a Spider-Man Unreal Engine 5 Tech Demo. Moreover, these videos show Star Wars KOTOR and Counter-Strike Global Offensive in UE5. Additionally, you can find a Portal Remake and an NFS3 Remake. And finally, here is a Half Life 2 Fan Remake, an Oblivion fan remake, a Silent Hill fan remake, a World of Warcraft remake, a Skyrim remake, and a Zelda Ocarina of Time UE5 Remake.