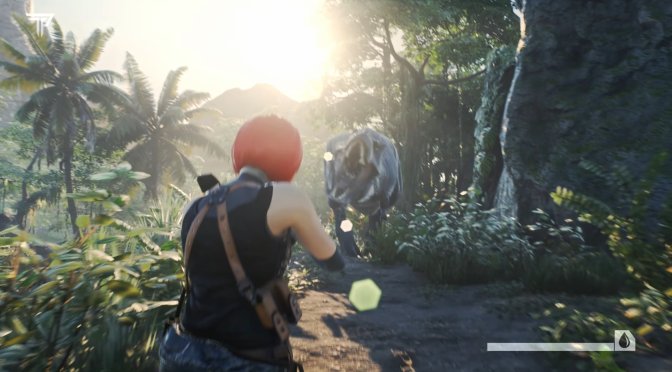 TeaserPlay released a new video, showcasing what a remake of Dino Crisis could have looked like in Unreal Engine 5. This fan remake is not related in any way to a previous project we shared in 2019.

From the looks of it, team Arklay’s Dino Crisis Fan Remake is dead. The team has not provided any update for the past 2-3 years so yeah, don’t expect anything from it.

For this new fan remake, TeaserPlay took advantage of some of Unreal Engine 5’s key features. As such, you can expect Lumen, Nanite, Screen Space Ray Tracing and Global Illumination Shader.

As we can see, this fan remake has a 3D model that resembles Regina. TeaserPlay has recreated a number of environments from the first game, and included two dinosaur types. On one hand, we have the iconic T-Rex and on the other hand, we have the raptors. Oh, and there is also a Mega-Raptor. The 3D model of the T-Rex looks great but the raptors could have been better.

Now even though this fan remake is not available for download, Dino Crisis fans can go ahead and download this Dino Crisis 2 Fan Remake/Tech Demo in Unreal Engine 4.