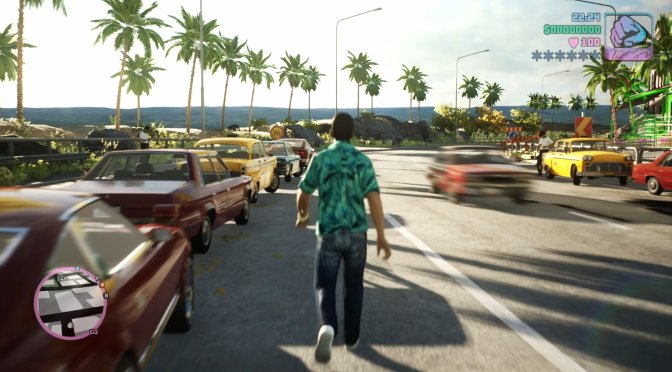 Last week, we shared a trailer from a fan remake of Grand Theft Auto San Andreas. Created by TeaserPlay, that trailer showcased what a modern-day remake of GTA San Andreas could look like in Unreal Engine 5. And a couple of days ago, the YouTuber released a new trailer, showing off Grand Theft Auto Vice City in Epic’s latest engine.

As the YouTuber claimed:

“I used Lumen for rendering. My point in making this video was to show how powerful Unreal Engine 5 is for making sandbox games. I also wanted to show what the remaster version of GTA Vice City should look like”

The end result is spectacular and blows the original remaster of Vice City out of the water. This is what the Definitive Edition should look like. Imagine if Rockstar actually put some effort into that compilation.

Speaking of Unreal Engine 5, we also suggest taking a look at the following videos. Right now, you can download a Superman Unreal Engine 5 Demo and a Spider-Man Unreal Engine 5 Tech Demo. Moreover, these videos show Star Wars KOTOR and Counter-Strike Global Offensive in UE5. Additionally, you can find a Portal Remake and an NFS3 Remake. And finally, here is a Half Life 2 Fan Remake, an Oblivion fan remake, a Silent Hill fan remake, a World of Warcraft remake, a Skyrim remake, and a Zelda Ocarina of Time UE5 Remake.

Lastly, I’ve included below another UE5 fan remake, showcasing Halo Infinite in Epic’s engine. Created by Infinite Forges, this video attempts to recreate one of the levels from Halo Infinite in Unreal Engine 5. It looks cool, though not as great as the Vice City Remake, so be sure to watch it too!