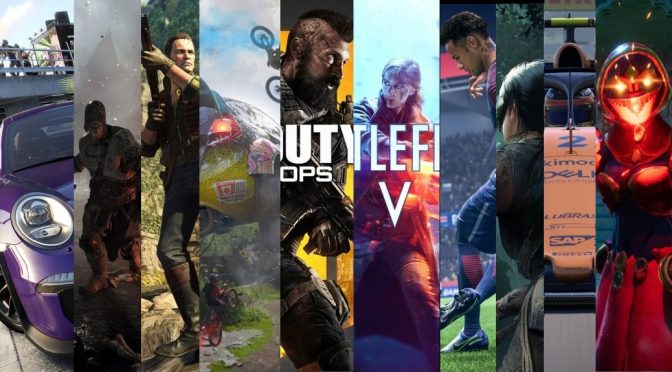 2018 is coming to an end and as you may have guessed, it’s time for our annual “Top 10 Most Optimized PC Games” list. For this list, we tested all the games that were released in 2018 (and for which we had a PC Performance Analysis article). Since some developers have released several patches for some of the games we’ve covered, we are judging their final 2018 versions. So, without further ado, here are the most optimized PC games of 2018 (at least in our opinion).

As we’ve already stated in the past, we judge games based on their PC performance optimization. But what do we consider a PC optimized game? Well… that’s easy to answer. Games that can scale on multiple CPU cores, that are not plagued by ‘console-ish’ side effects (like really low FOV, controller only on-screen indicators and mouse acceleration/smoothing issues), that pack a respectable amount of graphics options to adjust, and that – above all – look and run great on a variety of PC systems are what we consider “properly optimized PC games“. This may differ from what others think when they hear the “most optimized PC games” words but hey… this is our list.

“The Crew 2 is well optimized for the PC platform. The game does not require a high-end CPU, though it does require a really powerful GPU for higher resolutions than 1080p (unless you are willing to lower your settings). Still, The Crew 2 looks great so I guess – to a degree – it does justify its GPU requirements. There are proper keyboard on-screen indicators and we did not experience any stutters while playing (even when installed on an HDD instead of an SDD). We did notice though some awkward little annoyances (for example, the main menu is assigned to F10 instead of ESC and you can’t use your mouse to ‘catch‘ and move the map). It’s not perfect but it’s one of the ‘smoothest‘ Ubisoft games we’ve played.”

“City of Brass is a game that performs great and looks cool on the PC. The game appears to be scaling on more than four CPU cores, however the performance difference between a quad-core and a six-core is only 10fps. Still, the game runs incredibly well even on dual-cores. We also did not experience any crashes or mouse acceleration/smoothing issues. Overall, this is a polished product that will run on a variety of PC configurations!”

“F1 2018 performs incredibly well on the PC platform. The game does not require a high-end CPU and can be easily considered a GPU-bound title. An NVIDIA GTX980Ti is able to offer a smooth experience at 1080p and an AMD Radeon RX Vega 64 has no trouble at all running the game at both 1080p and 1440p. The game supports wheels, displays proper on-screen keyboard indicators, and we did not encounter any crashes; it’s a pretty solid PC version.”

“The outtake here is that the game runs like a charm on the PC platform. Yes, the game does not look as impressive as other triple-A games, however, this does not mean that it looks awful or average. Still, the fact that it can run so smoothly – even when there are lots of enemies on-screen and on low-end PC systems – is really cool. As such, we’d love to see some real-time ray tracing effects in this particular game as there appears to be a lot of performance headroom (and we’re pretty sure that real-time ray tracing global illumination would significantly improve the game’s visual fidelity, especially at nights).”

“Warhammer Vermintide 2 looks and performs incredibly well on the PC. This is one of the few titles that takes advantage of more than four CPU threads, looks great, and runs like a charm. We did not experience any stuttering or mouse acceleration/smoothing issues, and there are one hell of graphics settings to tweak.”

5.) Shadow of the Tomb Raider

“Shadow of the Tomb Raider performs great on the PC, though there is still room for improvement. Yes you will need a high-end system, however the game justifies those requirements. Also, it runs way, way better – at launch – than its predecessor. The game comes with lots of settings to tweak and there is an option to completely disable mouse smoothing (it’s enabled by default so make sure to disable it). It’s a well polished product, though it’s not perfect yet. It’s also one of the few games that shows tremendous performance improvements when using DX12.”

“FIFA 19 is one of the most optimized sports games we’ve seen to date. The game runs incredibly well on a wide range of PC configurations and looks absolutely amazing. Our only gripe is with its graphics settings (too limited and they are not included in the game, meaning that you’ll have to quit it, open its configuration settings tool and then re-launch it in case you want to make any adjustments). Other than that though, FIFA 19 is a top quality product on the PC.”

“Forza Horizon 4 is not a perfect PC game (and I doubt we’ll see many “perfect” PC games), it’s undoubtedly one of the most optimized PC games of 2018. Right from the start, the game runs with more than 60fps on a wide range of PC configurations, and comes with a lot of graphics settings so you can adjust your experience. As you’d expect, the game supports both wheels and keyboard, and displays proper keyboard on-screen prompts. It’s also the best looking racing game on the PC right now, so that’s another big plus!”

“Call of Duty Black Ops 4 works like a charm on the PC. Beenox has done an incredible work and Black Ops 4 runs smoothly on a wide range of PC configurations. The game also comes with a wide range of options, feels great with mouse+keyboard, and we did not experience any crashes. It’s just sad that its visuals are not as groundbreaking as they were in previous Call of Duty games (there was a time when each and every new Call of Duty game offered gorgeous visuals). Still, Black Ops 4 is well optimized on the PC platform and perhaps that’s what counts at the end of the day.”

“Battlefield 5 is one of the most optimized PC games of 2018. The game comes with lots of graphics settings to tweak, offers proper on-screen K&M indicators, does not suffer from mouse acceleration/smoothing issues, supports higher refresh rates and resolutions, looks beautiful and runs smoothly on a variety of PC configurations. Although DICE and NVIDIA made some improvements, DX12 is not yet as fast as DX11. Moreover, the RTX effects can bring even NVIDIA’s flagship graphics card to the ground. These effects are really demanding and I’m pretty sure that most RTX owners will disable them so they can run the game in higher resolutions with higher framerates.”