A couple of weeks ago, Microsoft and Playground Games have released a demo for Forza Horizon 4, giving us a taste at this open-world racing game. The game is officially releasing on October 2nd and since Microsoft has provided us with a review code, it’s time to benchmark this new racer and see how it performs on the PC platform. 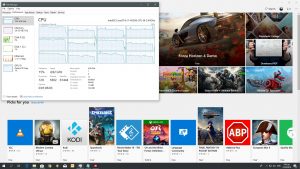 Playground Games has implemented a wide range of graphics settings to tweak. PC gamers can adjust the quality of Anisotropic Filtering, Shadows, Motion Blur, Environment Textures, Static Geometry, Dynamic Geometry, MSAA, SSAO, Reflections, Windshield Reflections, Mirrors, World Car Level of Detail, Deformable Terrain, Screen-Space Reflections, Lens Effects, Shaders and Particles Effects. There are also options for FXAA and Night Shadows, Colorblind, Field of View, and the game supports 30fps, 40fps, 60fps, 120fps or unlimited framerates. Not only that, but for each option Playground Games has added a small description that explains whether “X” option affects the CPU, GPU or both. 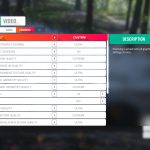 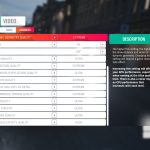 In order to find out how the game performs on a variety of CPUs, we simulated a dual-core and a quad-core CPU. And we are happy to report that Forza Horizon 4 can run with 60fps even on our simulated dual-core system, however, we had to enable Hyper Threading as the game would not boot at all when HT was disabled. Contrary to Forza Horizon 3’s launch version, Forza Horizon 4 can scale on more than four CPU cores/threads and runs silky smooth on a variety of CPUs. As such, we are pretty sure that a large number of PC gamers will be able to play the game with constant 60fps (provided they are not GPU limited of course). 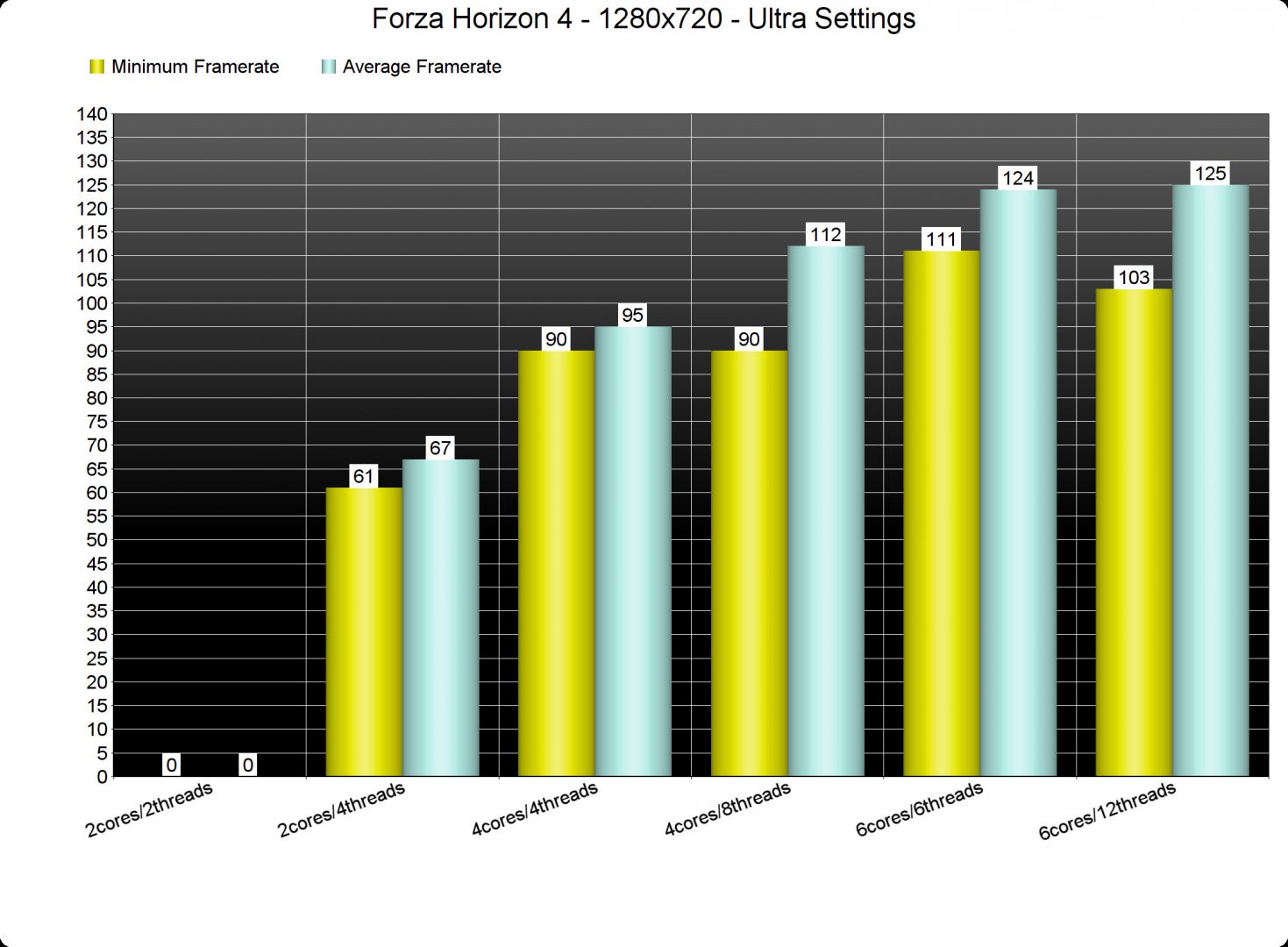 Forza Horizon 4 is one of the few games that run way, way better on AMD’s hardware. Our AMD Radeon RX580 was almost able to match GTX980Ti’s performance. Similarly, the gap between the NVIDIA GTX980Ti and the AMD Radeon RX Vega 64 was huge. Forza Horizon 4 is undoubtedly the game that AMD users can use to showcase their GPUs, and it will be interesting to see how the RTX2080Ti performs on this particular game. 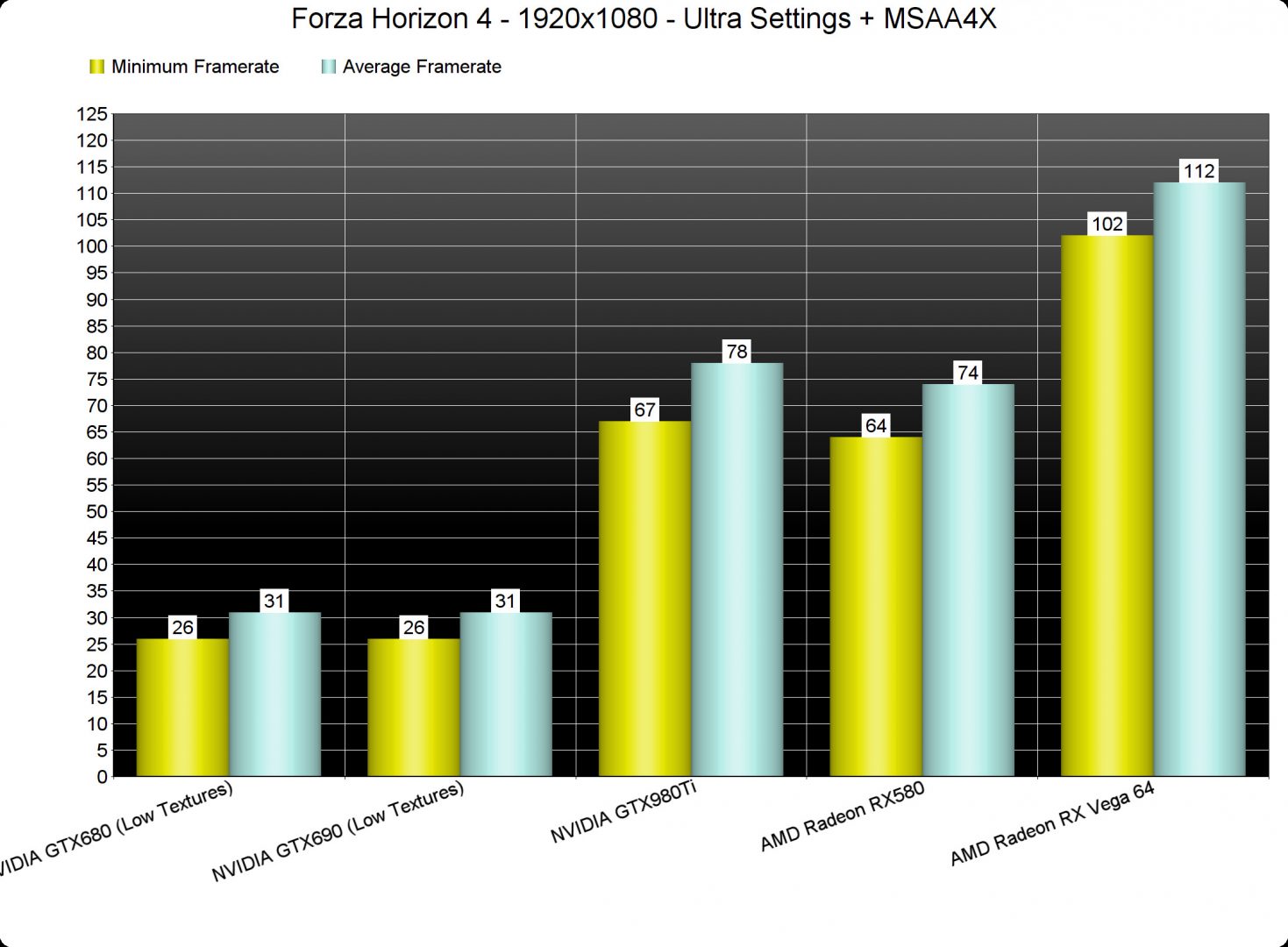 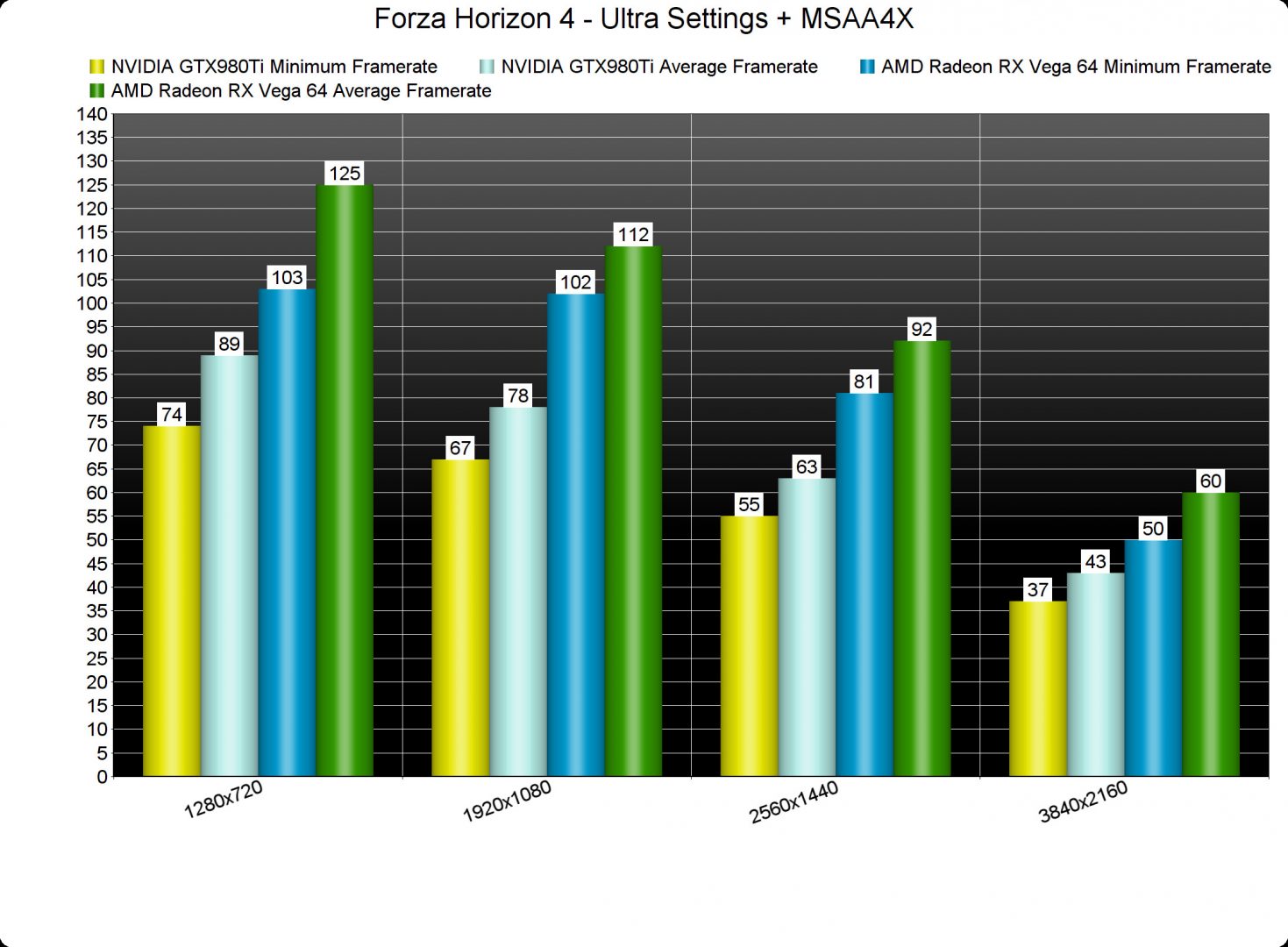 Forza Horizon 4 comes with five presets: Very Low, Low, Medium, High and Ultra. However, PC gamers can also push some settings to Extreme values, surpassing the default Ultra preset. At 1080p, both our GTX980Ti and RX Vega 64 were able to offer a constant 60fps experience on all graphics settings. 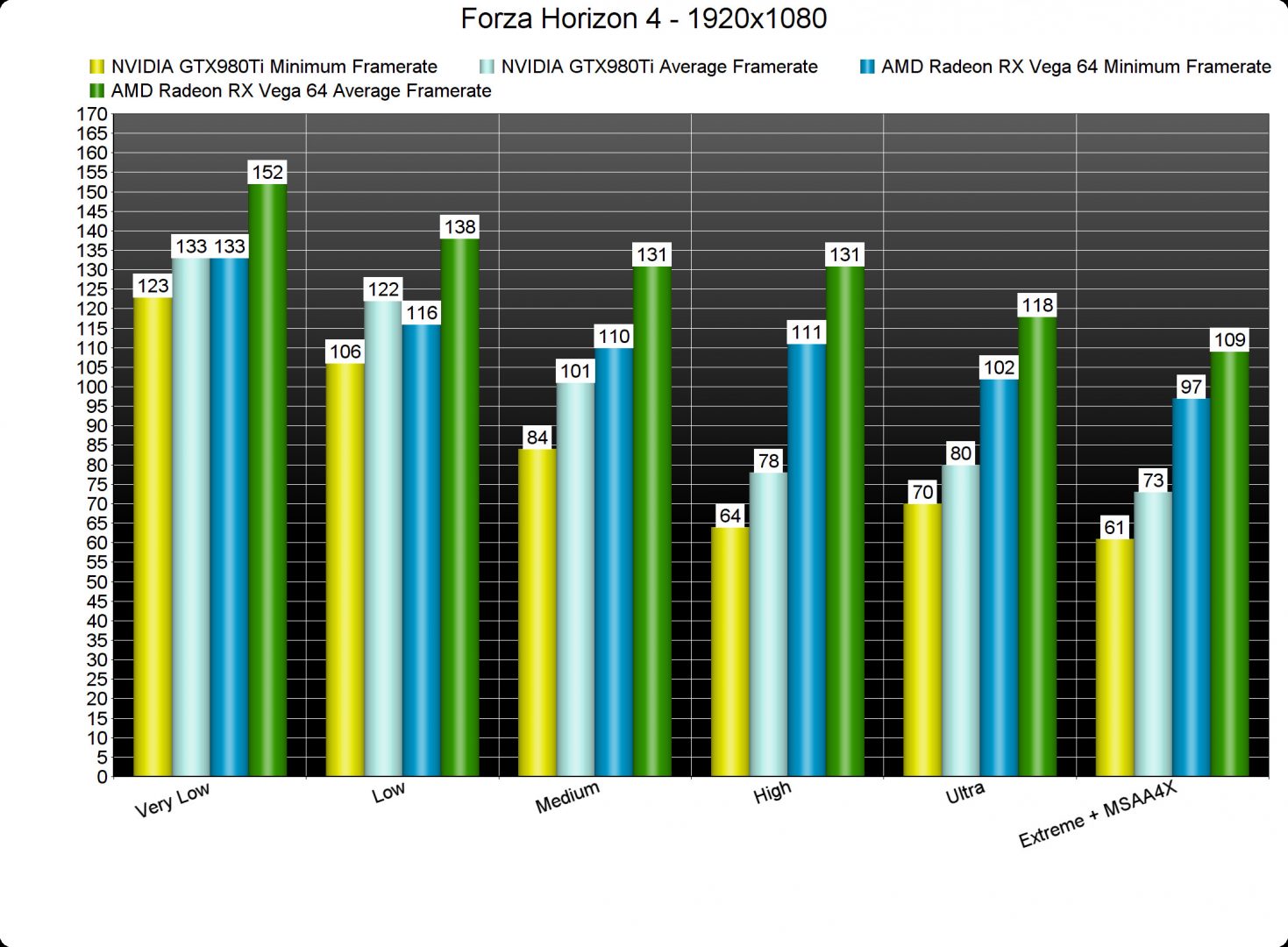 Graphics wise, Forza Horizon 4 is the most beautiful racing game to date on the PC. The rain effects are gorgeous, the dynamic time of day is great, the lighting system is fantastic, the cars are highly detailed. There is really nothing to complain here. We did notice some distant pop-ins of objects but most players won’t be able to spot them while racing (thanks also to the clever use of Motion Blur). The fact that this is an open-world racing game that looks great and performs so well is a great achievement, and shows how incredible the engine powering Forza Horizon 4 actually is.

Still, this isn’t a perfect PC game as we did experience some crashes (especially when changing settings) and when Rivatuner Statistics was enabled. We also experienced some minor stutters on AMD’s hardware (that were absent from NVIDIA’s hardware) so AMD will have to further polish its drivers. Furthermore, some settings require a complete restart of the game which is a bit annoying, especially when you’re trying to test custom settings.

So yeah, while Forza Horizon 4 is not a perfect PC game (and I doubt we’ll see many “perfect” PC games), it’s undoubtedly one of the most optimized PC games of 2018. Right from the start, the game runs with more than 60fps on a wide range of PC configurations, and comes with a lot of graphics settings so you can adjust your experience. As you’d expect, the game supports both wheels and keyboard, and displays proper keyboard on-screen prompts. It’s also the best looking racing game on the PC right now, so that’s another big plus!