Call of Duty Black Ops 4 has just been released and this time around, Treyarch and Activision appear to have put some effort into its PC version. Treyarch has worked together with Beenox in order to develop the PC version which according to Beenox is not a console port but a separate build that was built simultaneously with its console counterpart. As such, it’s time now to benchmark it and see how it performs on the PC platform. 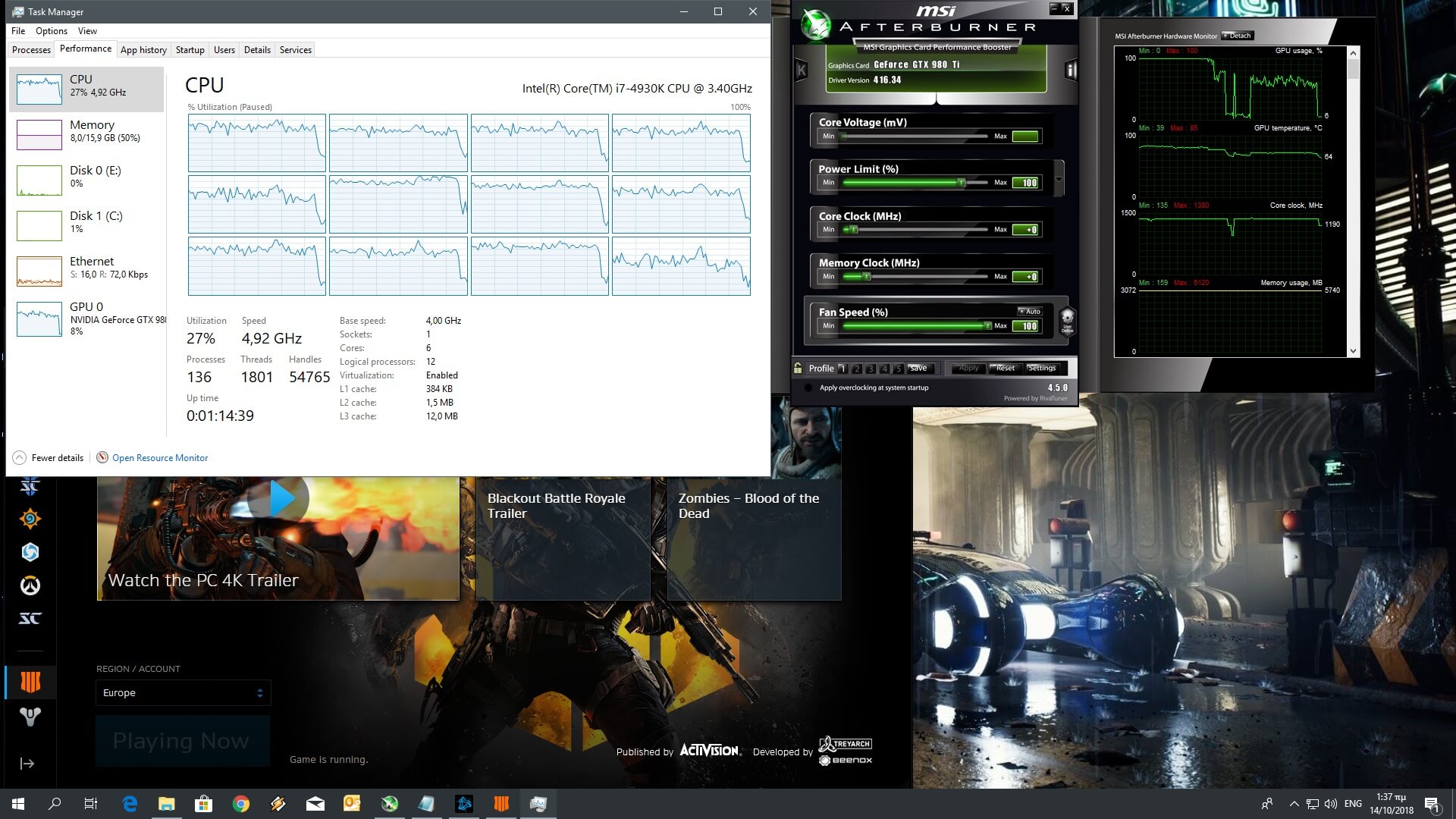 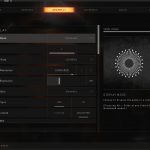 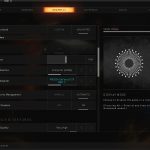 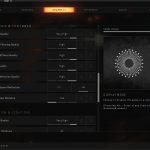 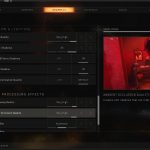 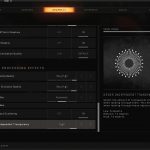 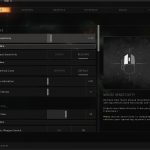 Call of Duty Black Ops 4 comes with a Zombies mode, various Multiplayer modes and Blackout (battle royale mode). Unfortunately there isn’t any benchmark tool however, it appears that the most demanding mode is Blackout so that’s what we’ve tested. If you can run Blackout without any issues, you’ll be more than fine in all other modes. Also, for our CPU benchmarks we lowered our resolution at 720p and the resolution scaler at 50% so we could avoid any possible GPU bottlenecks.

In order to find out how the game performs on a variety of CPUs, we simulated a dual-core and a quad-core CPU. With Hyper Threading enabled, our simulated dual-core was able to run Blackout with constant 60fps. Surprisingly enough, Hyper Threading brought significant performance improvements in both our six-core and simulated quad-core systems. As such, and similarly to Assassin’s Creed Odyssey, we strongly suggest enabling it. 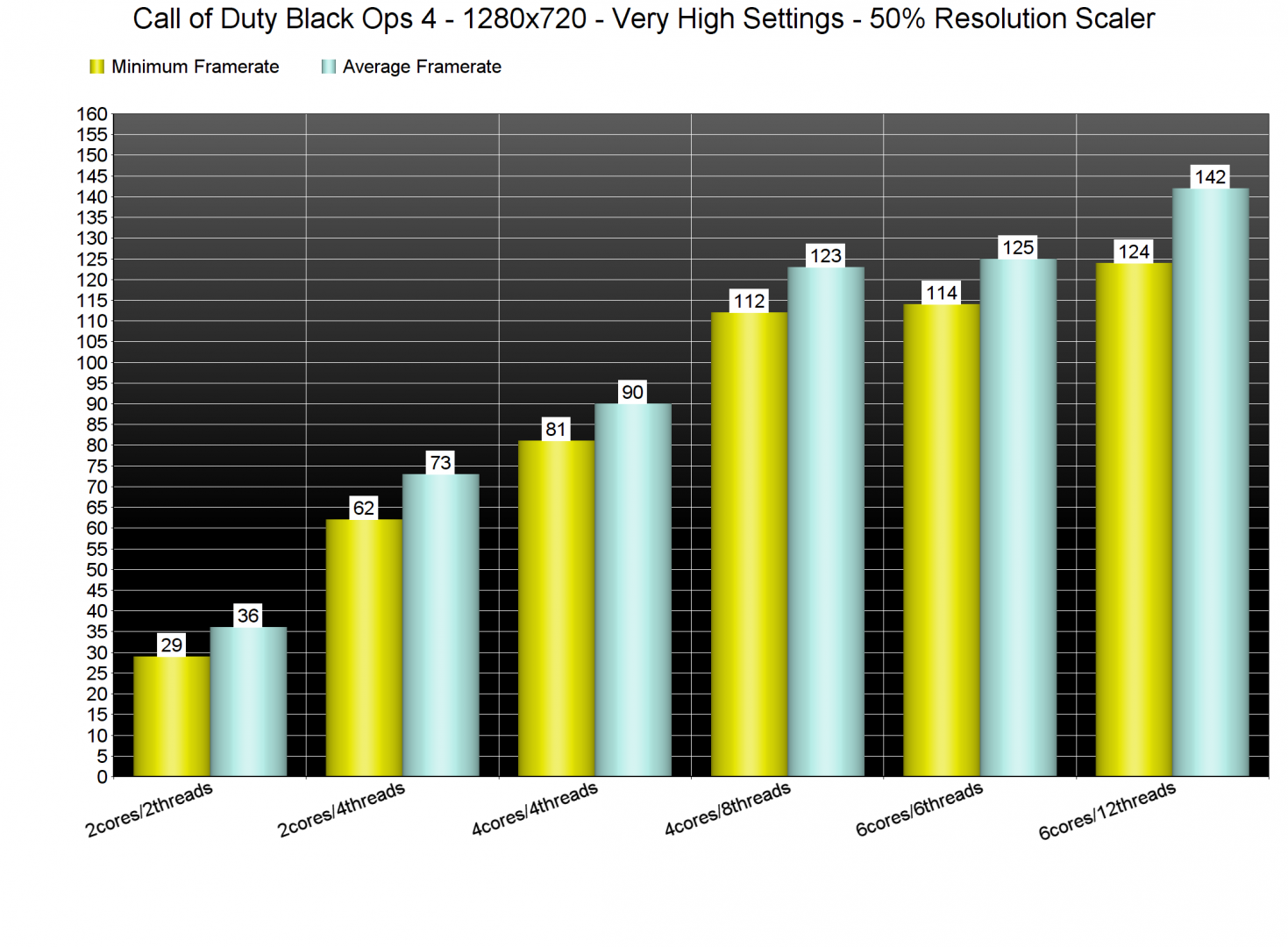 While the game comes with lots of graphics settings, our NVIDIA GTX980Ti, AMD Radeon RX580 and AMD Radeon RX Vega 64 had no trouble at all running the game at 1080p on Very High settings. SLI scaling appears to be great and our GTX690 was able to offer a smooth experience (though we had to lower Textures to Low in order to avoid any possible VRAM limitation). 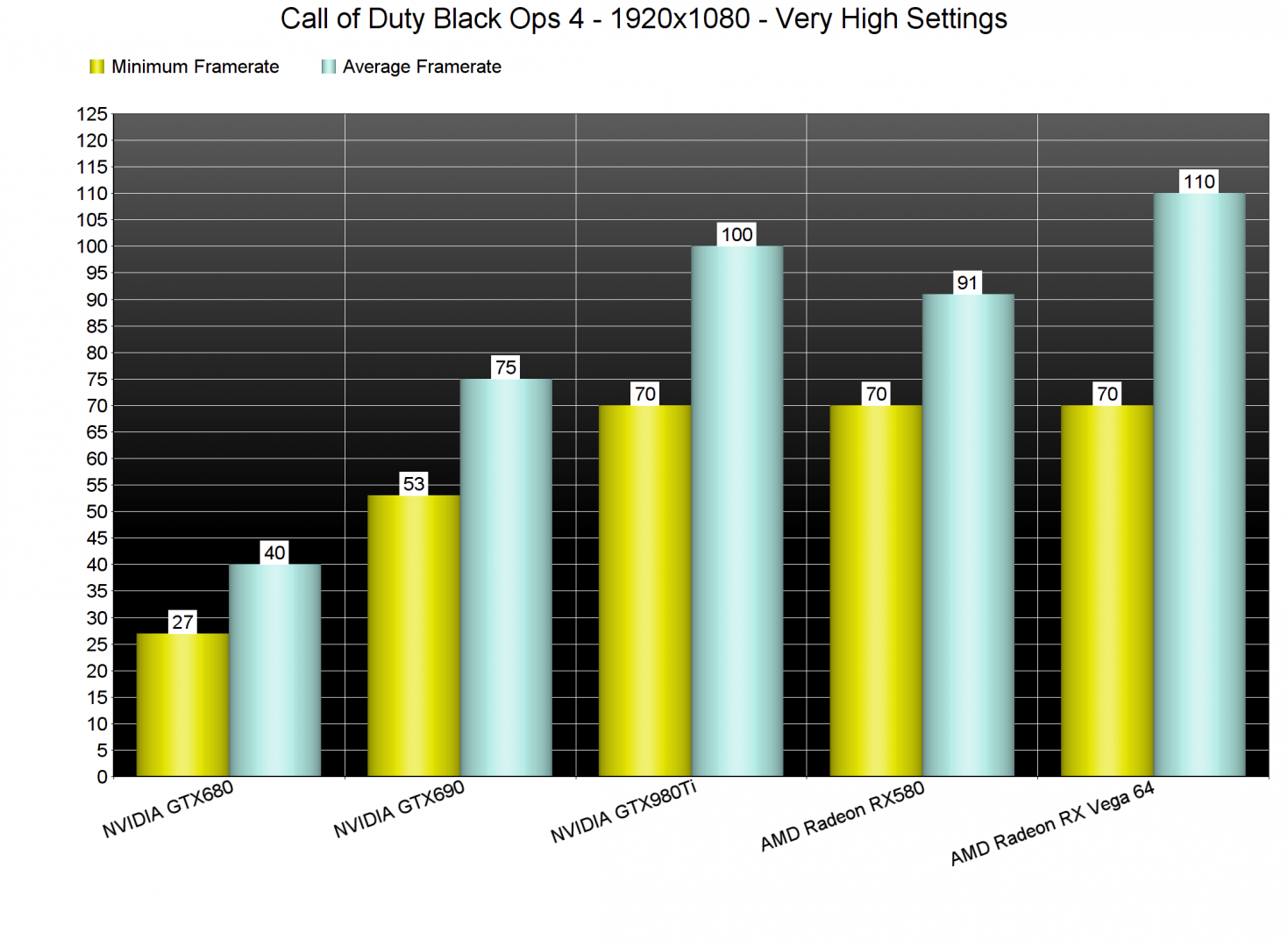 As we’ve seen with numerous titles on our test system, NVIDIA’s GPUs run better at low resolutions (mainly due to the extra CPU overhead that comes with AMD’s DX11 drivers). Still, at 1080p the AMD Radeon RX Vega 64 was able to offer a small boost over the GTX980Ti. At 1440p, the gap got bigger between these two GPUs as we were GPU-limited for the entire time. At 4K, the GTX980Ti was unable to come close to a 30fps experience, something that was possible with the AMD Radeon RX Vega 64 (though I’m pretty sure that no one will prefer playing Black Ops 4 with only 30fps). 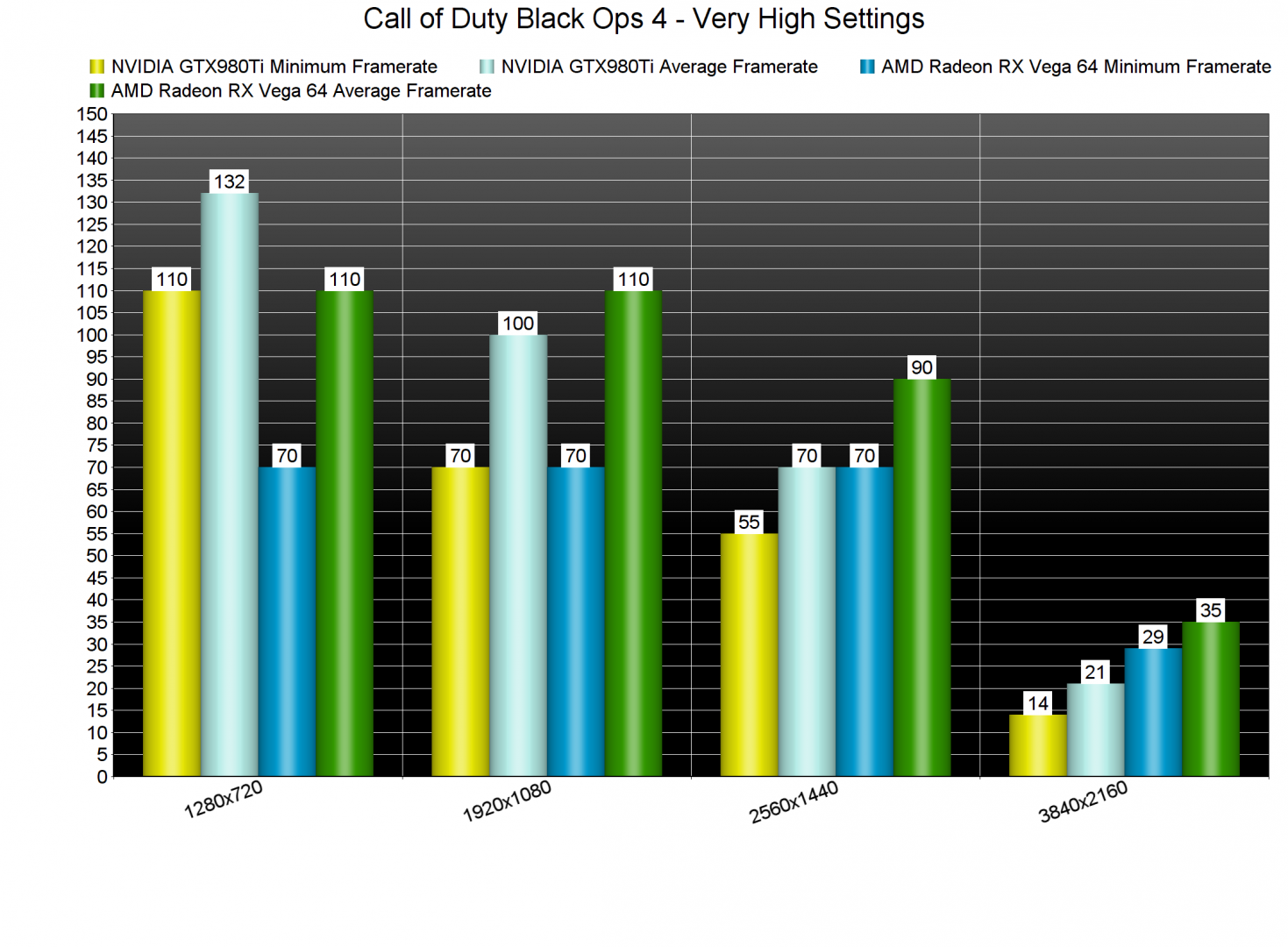 Do note that the game appears to be bugged right now on NVIDIA’s GPUs when changing resolutions while playing. Below you can find two screenshots from the Asylum area when we changed the resolution from 720p to 1080p.

And here are two screenshots from the same area at 1440p after restarting the game. As you can clearly see, there is a tremendous performance difference between them. So be warned NVIDIA users and avoid changing resolution while you are playing the game.

Graphics wise, the game looks similar to its open beta build. While there are some low-quality textures, we haven’t witnessed those awful textures that were present in the open beta. Things got a bit better, however the game still looks a bit soft, especially when you enable any of the available Anti-Aliasing solutions (SMAA 2TX noticeably blurs the distant objects so we suggest using a higher resolution with or without SMAA). Character models are great and the developers have implemented a cool fade in/fade out LOD solution (instead of having objects changing instantly from low to high quality and vise versa).

All in all, Call of Duty Black Ops 4 works like a charm on the PC. Beenox has done an incredible work and Black Ops 4 runs smoothly on a wide range of PC configurations. The game also comes with a wide range of options, feels great with mouse+keyboard, and we did not experience any crashes. It’s just sad that its visuals are not as groundbreaking as they were in previous Call of Duty games (there was a time when each and every new Call of Duty game offered gorgeous visuals). Still, Black Ops 4 is well optimized on the PC platform and perhaps that’s what counts at the end of the day. 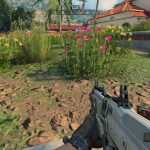 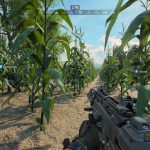 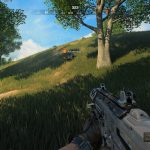 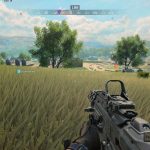 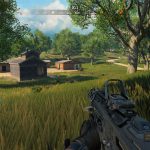 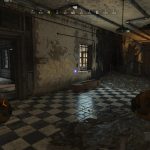 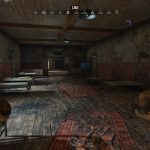 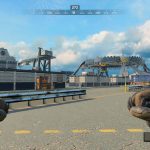 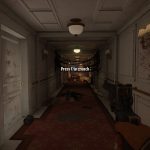 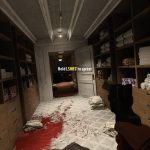 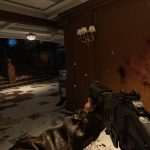 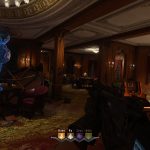