Battlefield 5 is the first game officially supporting the newly announced real-time ray tracing effects and as we’ve already reported, even NVIDIA’s flagship GPU is unable to offer a smooth gaming experience. Still, and even without these effects, Battlefield 5 is one of the most beautiful games to date. The game has just been released on the PC so it’s time to benchmark it and see how it performs on the PC platform. 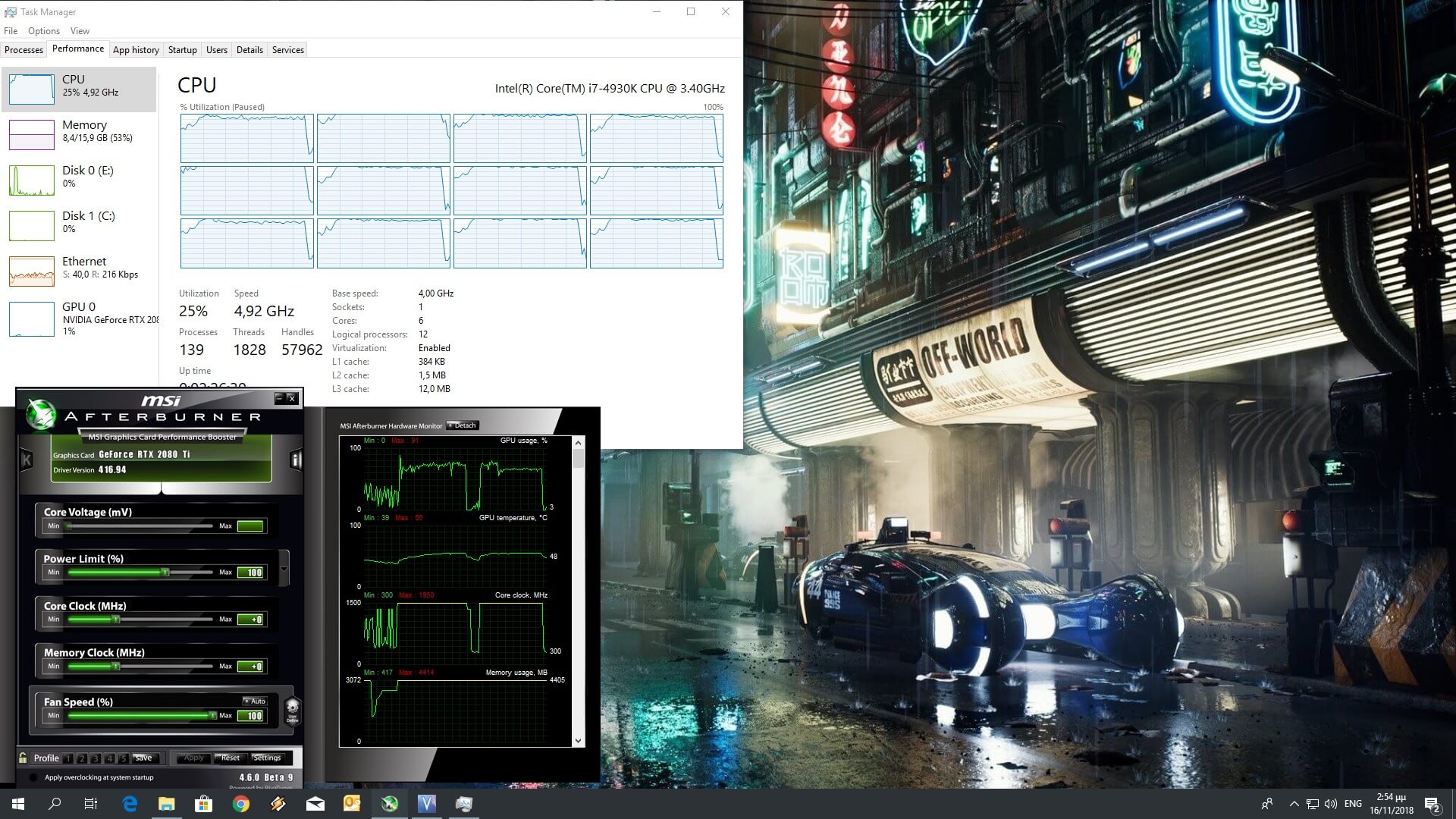 DICE has included lots of graphics settings to tweak. PC gamers can adjust the quality of Textures, Texture Filtering, Lighting, Effects, Post Process, Mesh, Terrain, Undergrowth, Anti-Aliasing and Ambient Occlusion. There are also options to enable/disable Chromatic Aberration, Film Grain, Vignette, Lens Distortion, ADS Field of View and DOF Effects, and there is also a FOV slider for both first-person and third-person perspectives. 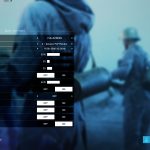 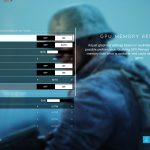 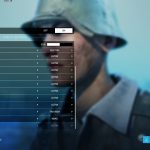 As we’ve already covered in a separate article, the NVIDIA GeForce RTX2080Ti is unable to offer a constant 60fps experience on Ultra settings at 1080p with the RTX effects on Ultra. If you are interested in the real-time ray tracing effects, I suggest you read that article.

Now while DICE and NVIDIA have made a number of performance improvements regarding DX12, the game still runs better in DX11. This is something we’ve experienced in all previous Frostbite-powered games on both AMD’s and NVIDIA’s hardware. While we did not experience any of the annoying stutters that plagued all previous Frostbite games in DX12, Battlefield 5 ran noticeably slower in that particular API. Therefore, we strongly suggest using the DX11 API as we couldn’t notice any graphical differences between DX11 and DX12. 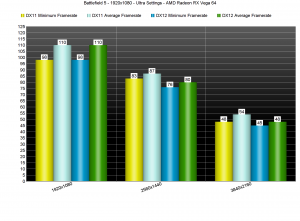 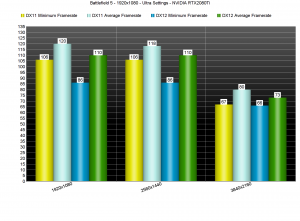 For our CPU tests, we benchmarked the multiplayer mode in Conquest mode with 64 players. This scenario puts a lot of stress on the CPU and is the ideal benchmark for the CPUs (at least in our opinion). In order to find out how the game performs on a variety of CPUs, we simulated a dual-core and a quad-core CPU. Our simulated dual-core system, even with Hyper Threading, was simply unable to come close to a 30fps experience. On the other hand, our simulated quad-core was able to offer a constant 60fps experience with Hyper Threading enabled, and there was a 22fps hit (minimum framerate) when we disabled. It’s well known that Frostbite scales incredibly well on multiple CPU cores/threads so we strongly suggest enabling Hyper Threading if your CPU supports it. 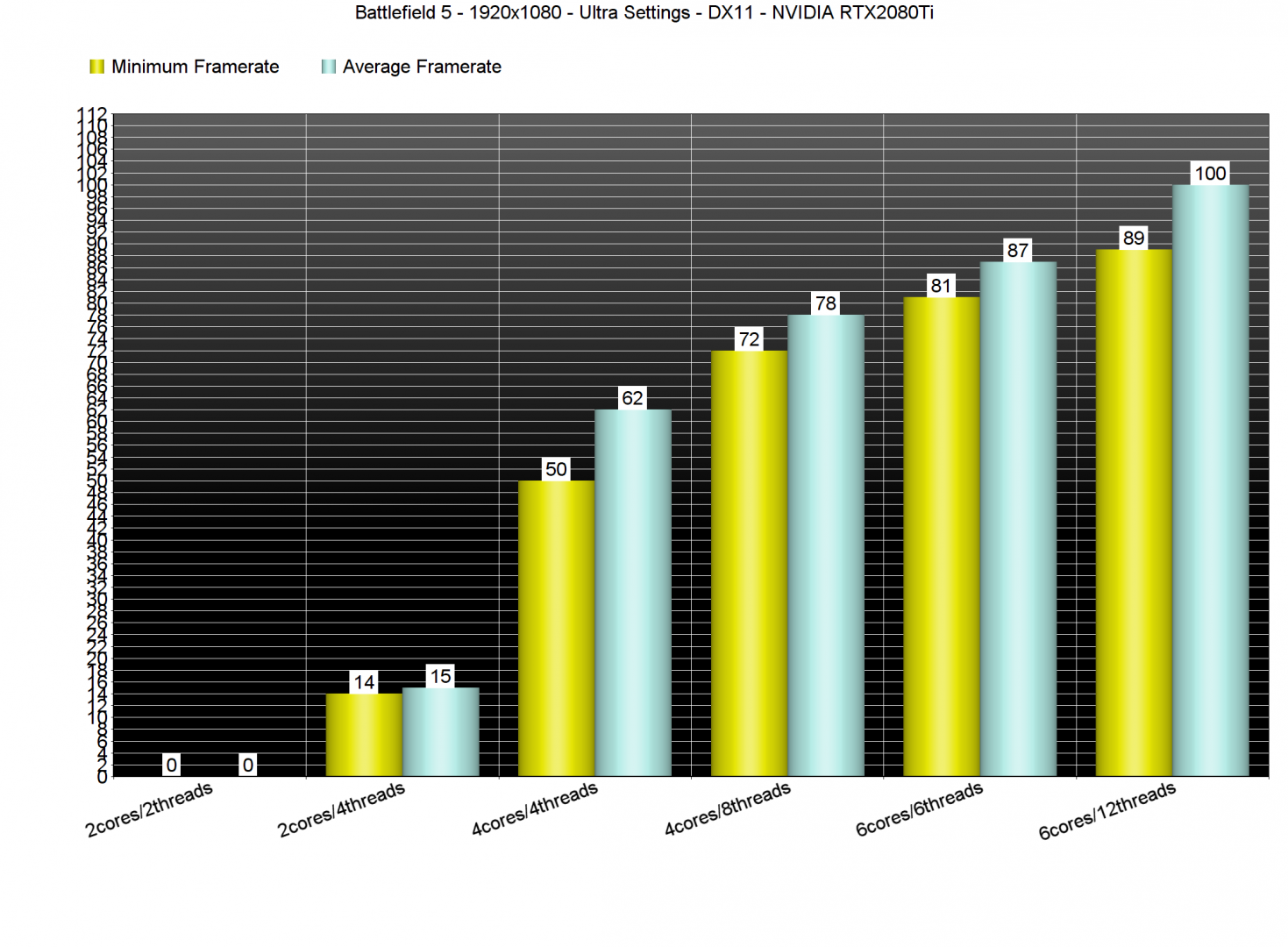 For our GPU tests we benchmarked the France forest level of the single-player mode as that level was one of the most demanding areas (GPU-wise). And we are happy to report that Battlefield 5 does not require a high-end GPU in order to be enjoyed. Our AMD Radeon RX580 and NVIDIA GTX980Ti had no trouble at all running the game on Ultra settings at 1080p with constant 60fps. On the other hand, our GTX690 was able to offer a 30fps experience (though we had to lower our Textures to Low in order to avoid any VRAM limitation). 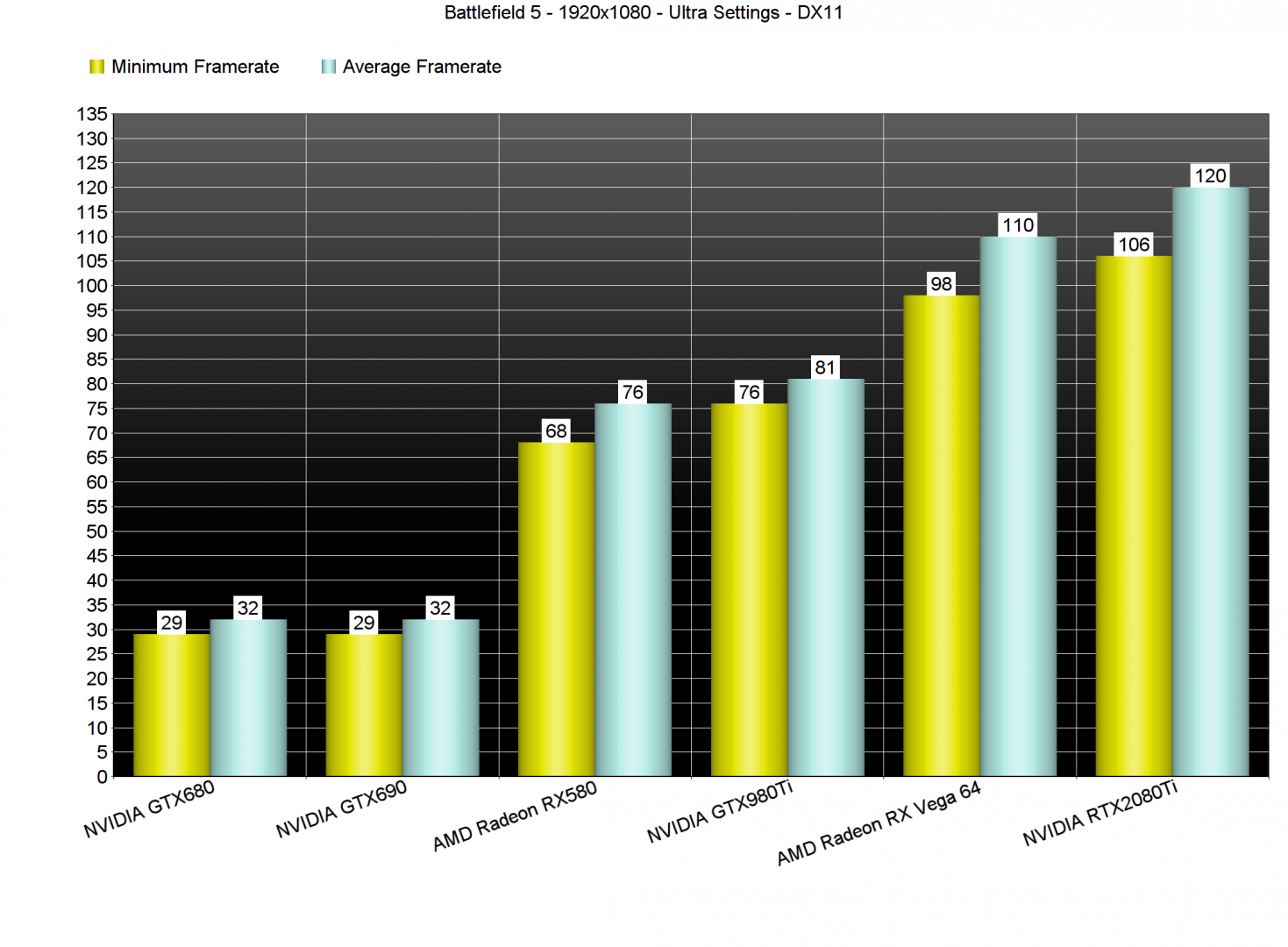 At 2560×1440, our NVIDIA GTX980Ti, AMD Radeon RX Vega 64 and NVIDIA RTX2080Ti were able to offer a silky smooth experience and at 4K, only our NVIDIA GeForce RTX2080Ti was able to offer a constant 60fps experience. The NVIDIA RTX2080Ti is a truly amazing GPU as even at 1440p we were CPU-limited (despite the game running with more than 100fps). This shows how powerful this GPU actually is and how future-proof it will be for those that have invested in it. 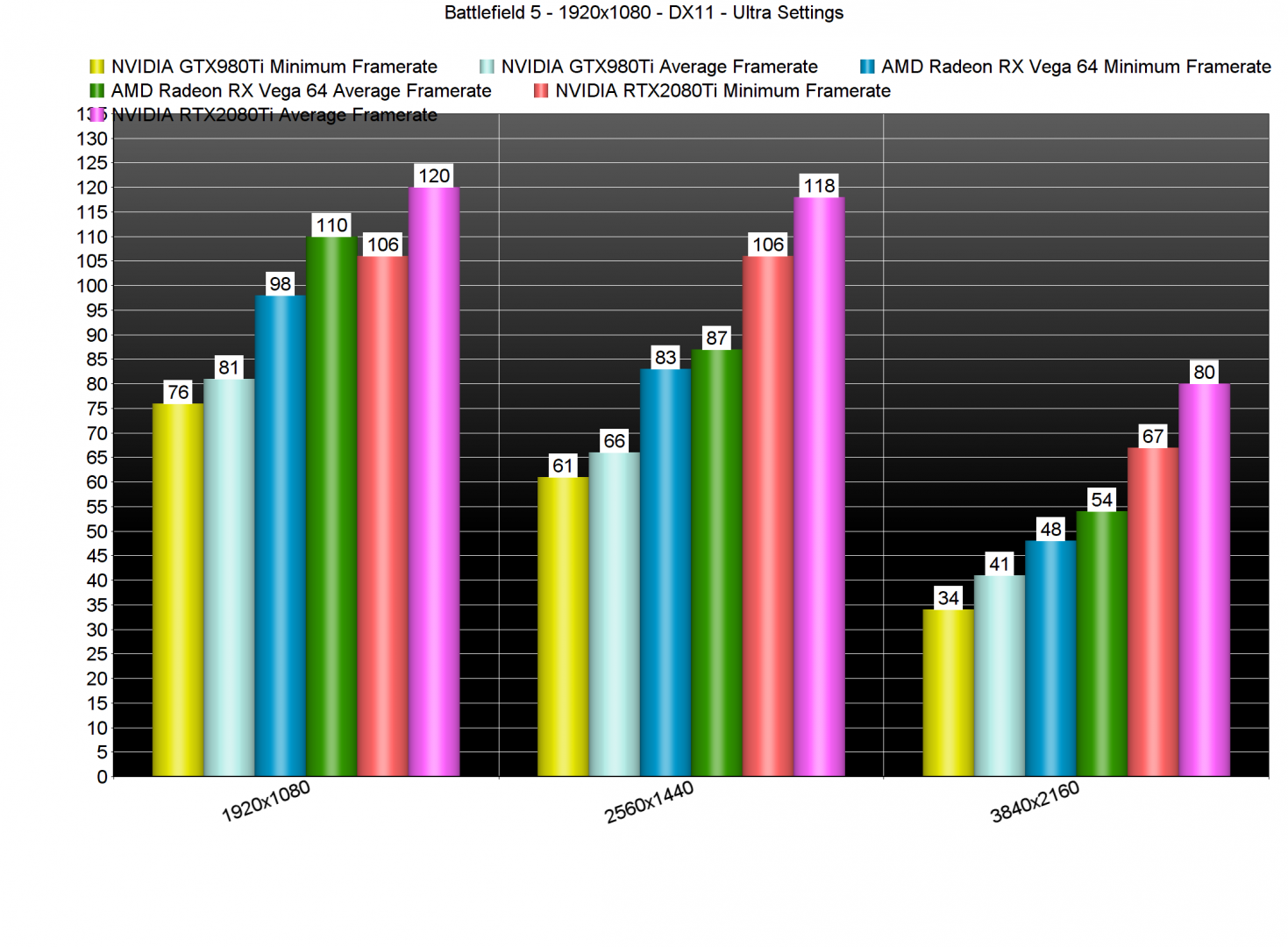 Graphics-wise, Battlefield 5 is one of the most beautiful games to date. Of course this should not surprise us as all Frostbite-powered games look great, but man this game packs absolutely gorgeous visuals. DICE has used photogrammetry and most of the textures look incredible, and the character models are highly detailed (though the lip-sync is not as awesome as I had hoped. It’s great but since the game looks so damn impressive, I was expecting more). The particle effects are awesome, the destructibility has been increased, and all the environments look fantastic. The fact that the game also runs so smoothly perfectly shows  why Frostbite is one of the best modern-day engines.

All in all, and as its predecessor, Battlefield 5 is one of the most optimized PC games of 2018. The game comes with lots of graphics settings to tweak, offers proper on-screen K&M indicators, does not suffer from mouse acceleration/smoothing issues, supports higher refresh rates and resolutions, looks beautiful and runs smoothly on a variety of PC configurations. Although DICE and NVIDIA made some improvements, DX12 is not yet as fast as DX11. Moreover, the RTX effects can bring even NVIDIA’s flagship graphics card to the ground. These effects are really demanding and I’m pretty sure that most RTX owners will disable them so they can run the game in higher resolutions with higher framerates.