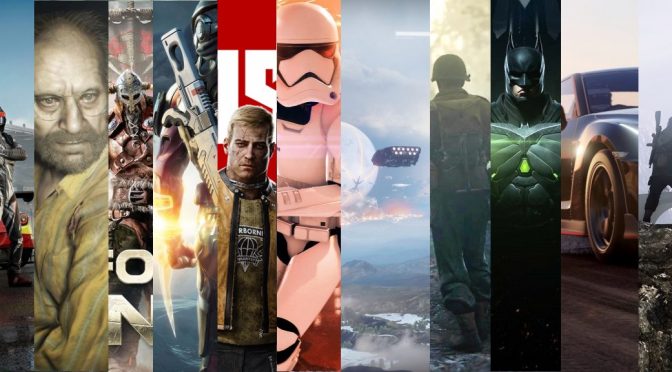 2018 is almost upon us and it’s time for our “Top 10 Most Optimized PC Games” list. For this list, we tested all the games that were released in 2017 (and for which we had a PC Performance Analysis article). As such, we are judging their final 2017 versions as some developers have released patches that have improved overall performance and stability.

As we’ve already stated in the past, we judge games based on their PC performance optimization.But what do we consider a PC optimized game? Quite simple. Games that can scale on multiple CPU cores and multi-GPUs, that are not plagued by ‘console-ish’ side effects (like really low FOV, controller only on-screen indicators and mouse acceleration/smoothing issues), that pack a respectable amount of graphics options to adjust, and that – above all – look and run great on a variety of PC systems are what we consider “properly optimized PC games“. This may differ from what others think when they hear the “most optimized PC games” words but hey… this is our list.

Contrary to last year, in 2017 we had no trouble at all picking up our most optimized PC games. Yes, there were some disappointing games like Nier: Automata and Nioh (though the latter has been significantly improved via patches), however, we got a lot of games that ran incredibly well on the PC platform right from the get-go.

So without further ado, here are our top 10 most optimized PC games of 2016 (navigate the list via pages).

Injustice 2 really surprised us with its PC port. QLOC had done an amazing work and the game even supports the mouse for navigating its menus. It also looks great, runs silky smooth and it’s the best PC fighting game on the PC in 2017 (from a technical perspective).

“In conclusion, Injustice 2 looks and performs great on the PC. The game can run on a wide variety of PC systems, and does not suffer from any optimization issues. Not only that, but QLOC has implemented proper mouse controls for its menus, allows players to map their keys, and shows proper on-screen keyboard keys during the tutorial and the actual game. In short, this is a well polished PC version of a console game, and QLOC should be proud of itself!”

Thanks to a number of patches, Call of Duty: WWII runs better now than its launch version. Most of its single-player campaign (except from one scene) and the whole multi-player mode works great on most PC systems. Moreover, we can’t overlook that a) despite its very minor optimization issues it still runs great on a variety of PC configurations, b) it’s more complex than Injustice 2, c) does not suffer from ‘consolitus‘ and d) it looks absolutely gorgeous and runs – for the most part – great on both AMD’s and NVIDIA’s hardware.

“Call of Duty: WWII may not be THE most optimized PC game of 2017, however it looks and runs better than most of its rivals.”

Sniper Elite 4 really impressed us when it got released in February. Rebellion has done an amazing job and the game runs incredibly well on a variety of PC systems. Moreover, and even though it features really large environments, Sniper Elite 4 does not require a high-end CPU in order to be enjoyed.

“All in all, Sniper Elite 4 performs extremely well on the PC platform. The game can be fully enjoyed on GPUs that are equivalent to NVIDIA’s GTX690 with 4GB of VRAM, and looks great. Rebellion has offered a respectable number of graphics settings to tweak, so those with weaker GPUs can lower some settings in order to hit the sweet 60fps experience. Moreover, Sniper Elite 4 does not require a high-end CPU and can be fully enjoyed even on a modern-day dual-core CPU.”

Resident Evil 7 really shines on the PC platform. Capcom has done an amazing job and the PC version is undoubtedly the game’s definitive version. Most of the stutters have been resolved via new drivers and patches, and the game now runs smooth on the PC.

“All in all, Resident Evil 7 runs great on the PC platform, though we did notice some stutters while loading new areas. These stutters can be annoying, so here is hoping that Capcom will fix them via a future patch. Resident Evil 7 is powered by the new RE Engine and from the looks of it, this engine was designed specifically for this type of games. Resident Evil 7 does not suffer from mouse acceleration issues, there are proper on-screen keyboard indicators, supports resolutions up to 4K, comes with lots of graphics settings to tweak, and runs great on a variety of PC systems.”

Mass Effect: Andromeda was criticized for its awful animations and bugs. Thankfully, BioWare has improved things and the game’s final version plays a lot better than its launch version. And while the animations during cut-scenes are not as smooth as we’d hoped (and some characters still feel lifeless), they are better than before. Furthermore, the game is scalable on older hardware and runs great on a variety of PC systems (thanks to the Frostbite 3 Engine).

“In conclusion, Mass Effect: Andromeda performs incredibly well on the PC platform. While the game scales on more than four CPU cores/threads, it is perfectly playable on modern-day dual-cores that support Hyper Threading.  And while it requires a high-end GPU for its Ultra settings, it is scalable on older graphics cards. The game comes with a Field of View slider, shows proper keyboard on-screen indicators, does not suffer from mouse acceleration issues (mouse smoothing is an option), and we did not experience any crashes while testing it. Yes, there are some really weird artistic choices, however tech-wise, Mass Effect: Andromeda is a really polished product on the PC!”

“It appears that all of Forza Motorsport 7’s PC issues have been resolved with the Windows 10 Fall Creators update. The game now runs silky smooth, there are no loading issues (previously the game could freeze while selecting a race) and there are no stuttering issues.”

“In conclusion, Project CARS 2 performs and looks great on the PC. Our GTX980Ti offered more than 60fps in most cases. The game looks absolutely stunning, scales wonderfully on six CPU threads, features lots of graphics settings to adjust, and is scalable on older hardware. It also supports all wheels, is friendlier to keyboards users, and does not use Denuvo.”

Ubisoft disappointed us with Watch_Dogs 2 and Assassin’s Creed Origins as both of them do not benefit at all from six-core CPUs even though they use all six cores at almost 100% (performance is exactly the same on six-core and quad-core CPUs). However, For Honor is a game that pleasantly surprised us as it runs like a charm on a variety of PC systems.

“All in all, For Honor is one of the most optimized games of 2017, alongside Resident Evil 7. The game shows proper keyboard on-screen indicators while playing, we did not notice any mouse smoothing/acceleration issues, there is a Field of View slider, and the game looks beautiful despite the fact that it does not require a high-end PC system. Ubisoft Montreal and Blue Byte did an incredible work, though we should note that the game’s environments are not really large. This may explain why Ubisoft’s open-world titles suffer from performance issues while For Honor does not. Either way, For Honor runs amazingly well on the PC, so kudos to Ubisoft.”

“In conclusion, Wolfenstein II: The New Colossus is one of the most optimized PC games of 2017. MachineGames has offered an FPS that looks great and runs amazingly fast. Thanks to the Vulkan API, the game scales incredibly on more than four CPU threads, even though it does not require a high-end CPU for a constant 60fps experience. Furthermore, the game runs great on both NVIDIA and AMD GPUs (though AMD GPUs will have an edge on this particular title). It also offers an incredible amount of graphics settings to tweak. So great job MachineGames!”

Destiny 2 deserves every praise it can get when it comes to its PC optimizations. Vicarious Visions has done an incredible work and Destiny 2 can run with constant 60fps on a variety of PC systems. The game also comes with a number of PC specific features and even though it originates from consoles, it really feels like a proper PC product.

“All in all, the Destiny 2 performance on the PC is exceptional. This is easily one of the most optimized games of 2017, and we have to congratulate Vicarious Visions for it. Destiny 2 looks better and performs better on the PC than on consoles. The game does not require a high-end system, features proper on-screen keyboard indicators, and comes with lots of PC features. Vicarious Visions and Bungie have nailed the PC controls. As such, the game feels like a PC shooter, does not suffer from mouse acceleration issues, and has a FOV option. Simply put, this is a really solid PC product!”

Star Wars: Battlefront 2 was plagued by microtransactions and lootboxes and we are against them. After a huge backlash, EA removed its microtransactions but let’s be honest here; this is one of the worst anti-consumer products of 2017. However, and on a technical level, DICE has done an incredible work here. Star Wars: Battlefront 2 is easily one of the most beautiful PC games of 2017 and runs ridiculously amazing on a variety of PC systems. Moreover, and contrary to previous “DICE releases”, its multiplayer mode works without latency issues or other game-breaking glitches (at least we haven’t experienced any while playing the game). This is, hands-down and in our own opinion, the most optimized PC game of 2017.

“In conclusion, Star Wars Battlefront 2 is one of the most optimized PC games of 2017. While the game scales well on more than four CPU cores/threads, it can run fine on modern-day dual-cores (provided they support Hyper Threading). Thanks to its advanced and more detailed lighting system, environments and characters, the game is more demanding than its predecessor. However, and thanks to its graphics settings, the game can scale on older PC hardware. The game does not suffer from mouse acceleration or smoothing issues, and we didn’t experience any issues with its netcode. Star Wars Battlefront 2 is an incredibly polished PC game, and while it uses the Denuvo anti-tamper tech, it does not suffer from any performance issues.”