While Wolfenstein: The New Order was a great first-person shooter, it was plagued by numerous optimization issues. These issues were mainly due to the id Tech 5 Engine. As such, when Bethesda revealed that its sequel would be using the new id Tech 6 Engine, we were certain that it would perform better than its predecessor. And we were right. Wolfenstein II: The New Colossus is one of the most optimized PC games of 2017. 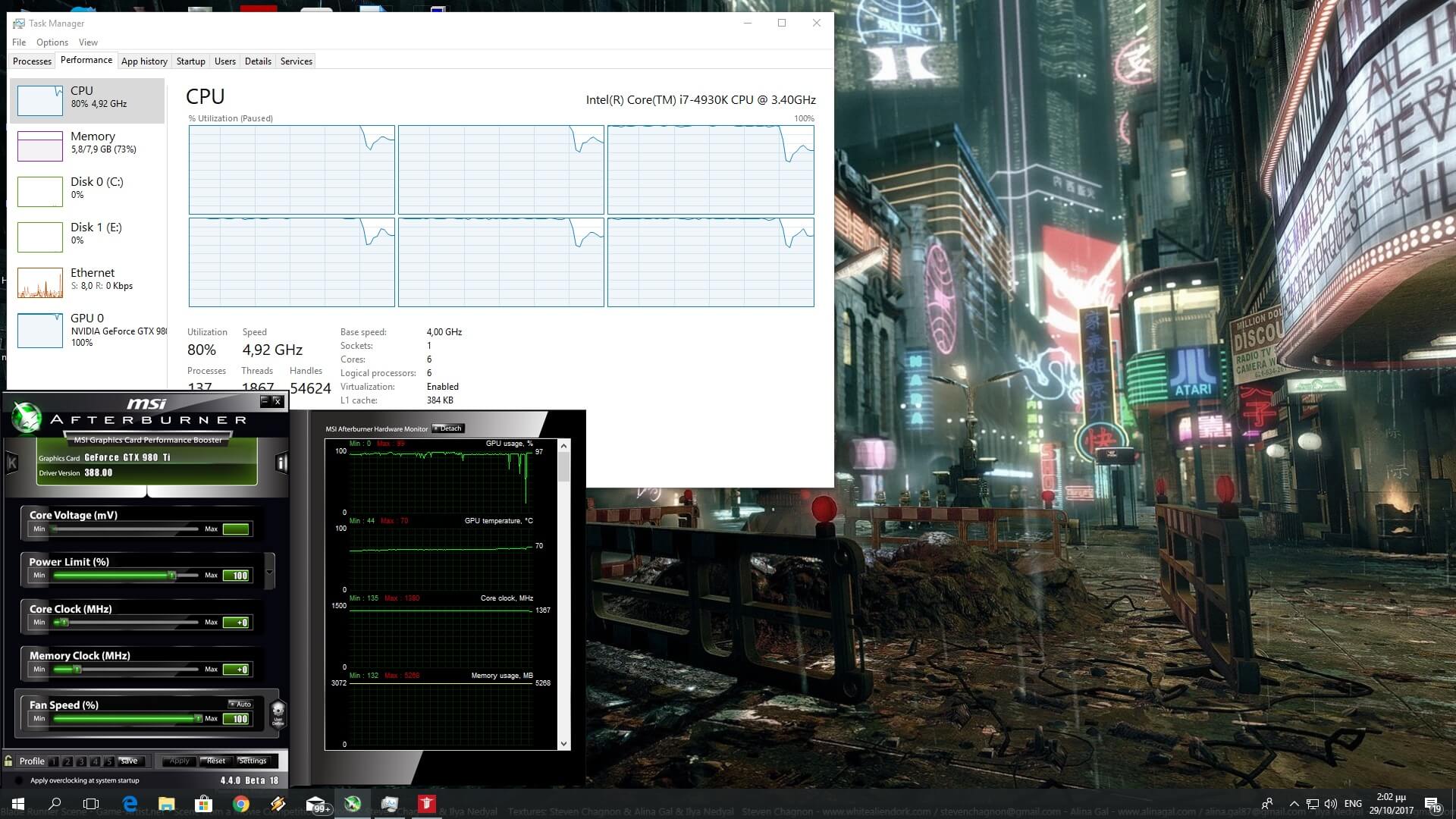 For this PC Performance Analysis, we used an Intel i7 4930K (overclocked at 4.2Ghz) with 8GB RAM, AMD’s Radeon RX580, NVIDIA’s GTX980Ti and GTX690, Windows 10 64-bit and the latest version of the GeForce and Catalyst drivers. NVIDIA has not released an optimized driver for this game and as such, there is no SLI profile for it yet. This basically means that our GTX690 performed similarly to a single GTX680. 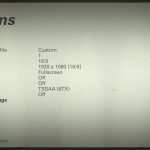 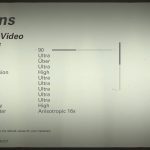 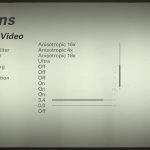 While Wolfenstein II: The New Colossus does not require a high-end CPU, it scales incredibly well on more than four CPU cores/threads. In order to find out how the game performs on a variety of CPUs, we simulated a dual-core and a quad-core CPU. For our CPU tests, we lowered our resolution to 720p and set the Resolution Scaler to 50%. We’ve done this in order to avoid any possible GPU limitation. 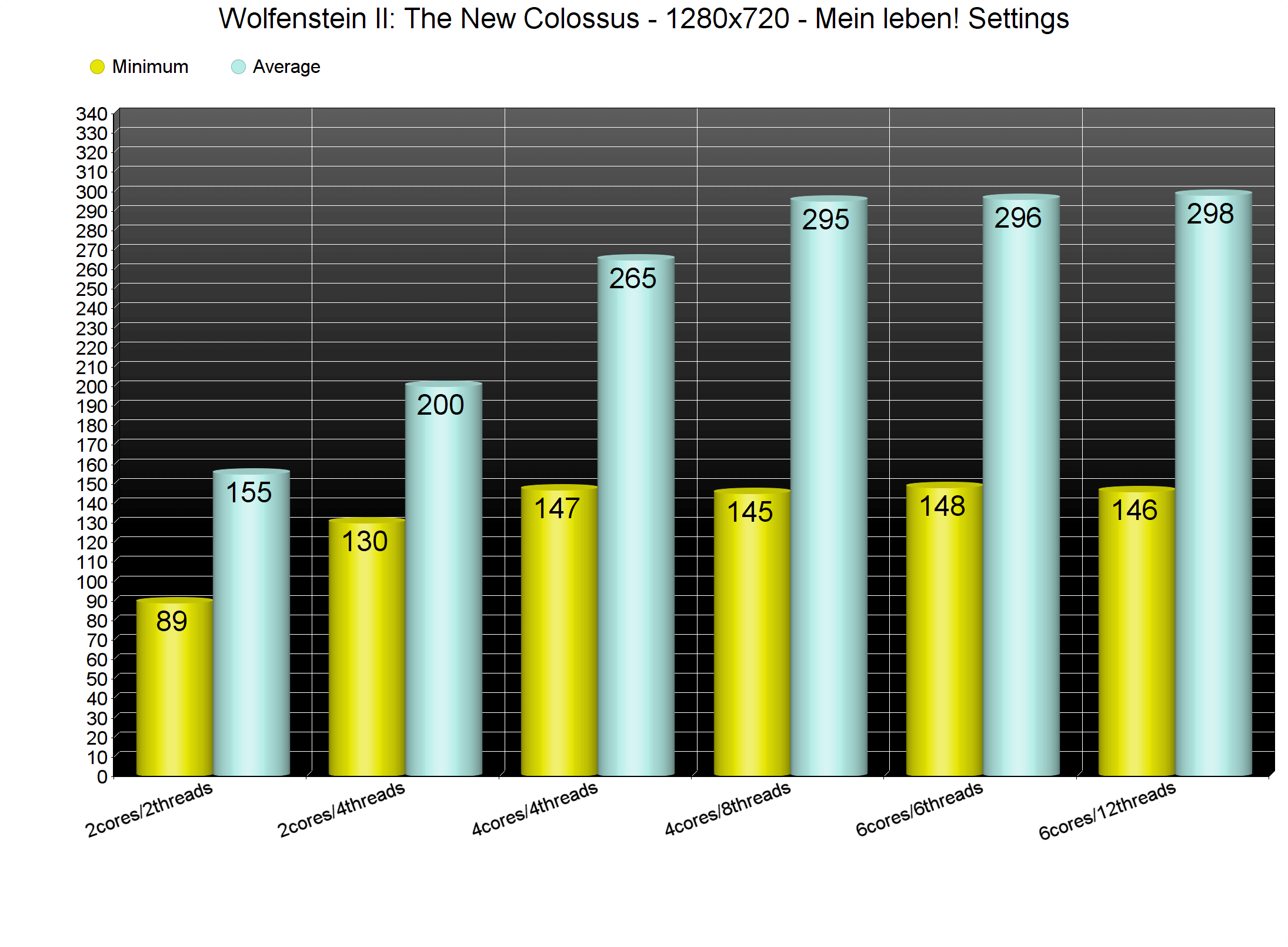 Wolfenstein II: The New Colossus only uses the Vulkan API, and the results speak for themselves. And even though NVIDIA has not released a Game-Ready driver for it, the game works great on both NVIDIA’s and AMD’s GPUs. We’ve seen some reports about crashes, glitches and various issues on NVIDIA’s GPUs. However, we haven’t experienced any issue at all during our tests (apart from some shadow issues).

Unfortunately, our GTX690 was simply unable to offer an acceptable performance on settings higher than Low. And that’s mainly due to VRAM limitations. As such, in single GPU mode, our GTX690 was under-used (something that explains the low performance on the GTX680). Bethesda and MachineGames have listed 4GB as the minimum VRAM requirement, and they were spot on. So, while theoretically – in SLI mode when such profile is available – the GTX690 has the raw power to run the game on High and Ultra settings, it simply cannot run the game due to its limited video memory. 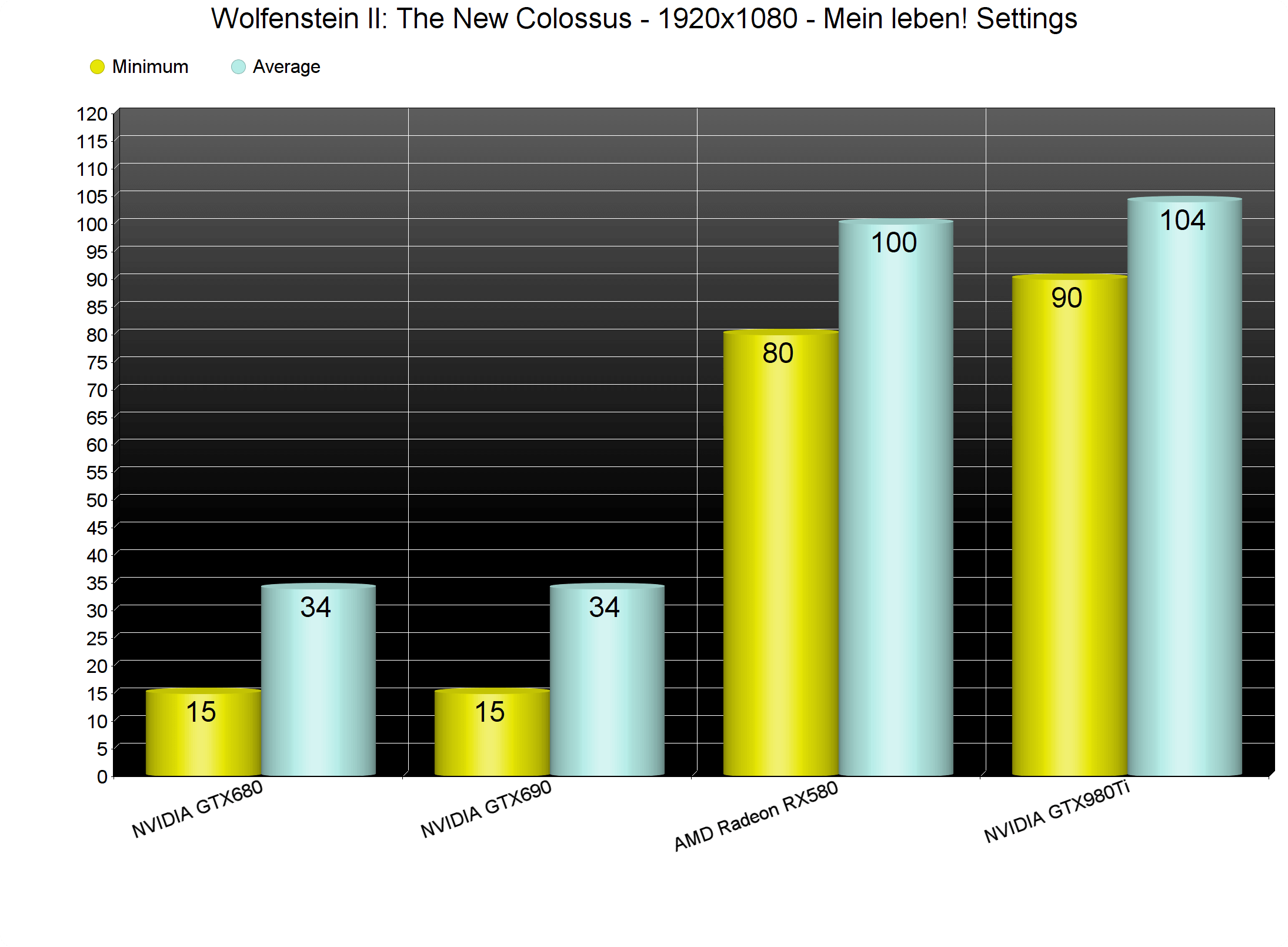 Wolfenstein II: The New Colossus comes with six presets: Low, Medium, High, Ultra, Uber and Mein leben! However, and despite the huge amount of advanced settings, we were expecting a bit better scaling on older GPUs. For example, the performance difference between Low and Ultra settings is 30fps. The good news is that the game looks quite good on its Lowest settings. Moreover, we’re looking at more than 100fps on these settings at all times. Still, and given the incredible CPU scaling, we hoped for similar scaling when lowering the game’s graphics settings. 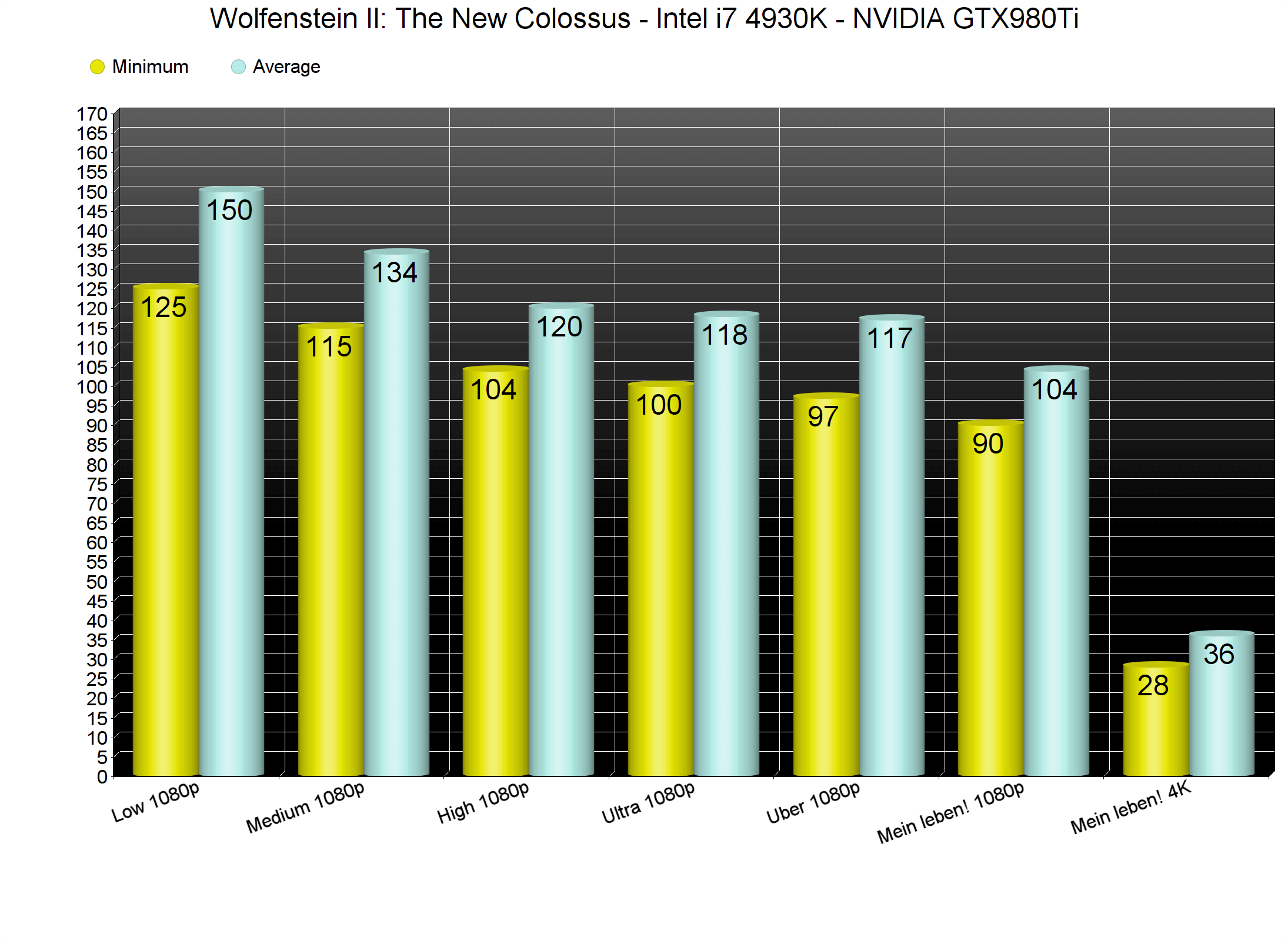 Graphics wise, this new Wolfenstein game looks better than its predecessor. MachineGames has implemented numerous modern-day effects and has retained all the chaotic fights that players loved in the first game. Enemies can be dismembered, limited environmental destructibility is in place and almost all light sources cast shadows. However, both the skin shaders and the Global Illumination effects are not up to what other triple-A games are offering. Still, we believe that Wolfenstein II: The New Colossus has the perfect visuals/performance ratio. The game looks amazing and runs incredibly fast, and that’s what both id Software and MachineGames aimed to achieve.

In conclusion, Wolfenstein II: The New Colossus is one of the most optimized PC games of 2017. MachineGames has offered an FPS that looks great and runs amazingly fast. Thanks to the Vulkan API, the game scales incredibly on more than four CPU threads, even though it does not require a high-end CPU for a constant 60fps experience. Furthermore, the game runs great on both NVIDIA and AMD GPUs (though AMD GPUs will have an edge on this particular title). It also offers an incredible amount of graphics settings to tweak. So great job MachineGames! 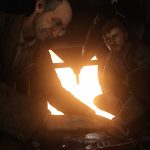 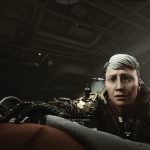 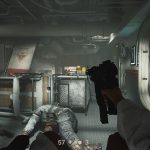 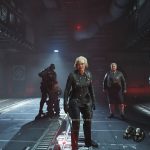 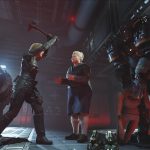 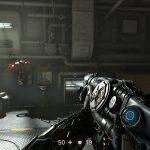 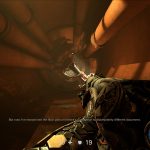 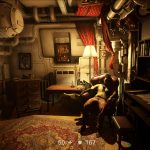 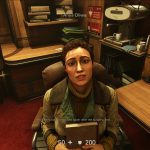 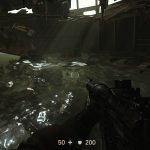 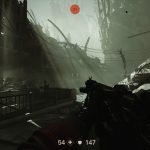 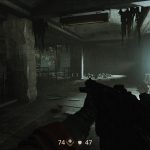 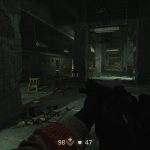 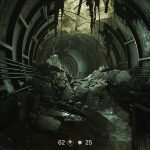 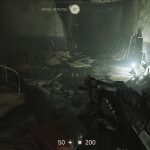