In 2018, NVIDIA released the high-end model for its Turing GPUs, the NVIDIA GeForce RTX2080Ti. Back then, NVIDIA advertised that GPU as a 4K/60fps graphics card. Thus, we’ve decided to collect in a single article all of the games we’ve benchmarked these past two years, and see whether this GPU was able to achieve that initial goal.

Do note that in this article we’ll be focusing on pure rasterization performance. We’ve also excluded any DLSS results, as the earlier versions of this tech weren’t that good. With DLSS 2.0, NVIDIA has managed to achieve something extraordinary. However, there are currently only five games that support DLSS 2.0 and these are: CONTROL, Mechwarrior 5, Wolfenstein Youngblood, Death Stranding and Deliver Us The Moon.

We also won’t focus on this GPU’s Ray Tracing support/performance. Similarly to DLSS, there are only a few games that support real-time ray tracing. Among them, there are only two that offer a full ray/path tracing renderer, and these are Minecraft RTX and Quake 2 RTX. Both of them look absolutely stunning, and will undoubtedly give you a glimpse at the future of PC gaming graphics. However, the overall adoption of real-time ray tracing wasn’t that high these past two years.

It’s also worth explaining what 4K/60fps means to us and to companies. For us, a GPU that has a minimum framerate of 60fps in 4K is a GPU that can be truly described as a 4K/60fps graphics card. However, most companies advertise their GPUs as “4K/60fps” when their average framerate hits 60fps or above (regardless of whether there are drops below 60fps in some scenes). Therefore, keep that in mind when viewing the following results.

So, with these out of the way, let’s see how the NVIDIA GeForce RTX2080Ti performed in 83 PC games on 4K/Ultra settings. Needless to say that you can find below benchmarks from a lot of triple-A games; from Battlefield 5 and Doom Eternal to Red Dead Redemption 2 and Horizon Zero Dawn. 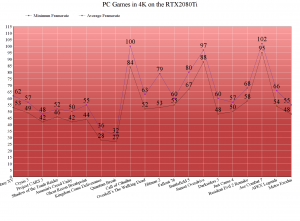 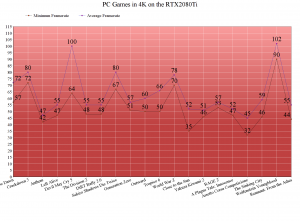 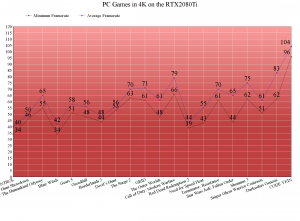 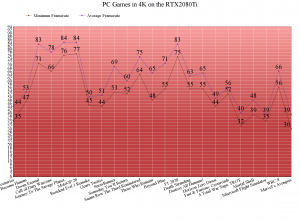 These results also justify why we were describing the RTX2080Ti as a “1440/Ultra settings” GPU. Despite what some PC gamers thought when this GPU came out, the RTX2080Ti was only ideal for 1440p. While you can hit 60fps in 43 games in 4K, there are drops below 60fps in half of them. In total, 73% of our benchmarked games were dropping below 60fps on the RTX2080Ti in 4K. On the other hand, and in all of these games, the RTX2080Ti can offer a smooth and constant 60fps gaming experience on 1440p/Ultra settings.

Before closing, we’d like to let you know that we’ll get an NVIDIA GeForce RTX3080 when it comes out. As always, we’ll purchase this GPU ourselves (like a customer, just like you). Since availability may be limited, we may not get one at launch day. Still, we plan to get both the RTX3080 and the Big Navi. Naturally, we’ll be sure to benchmark the RTX3080 with our most demanding games. Therefore, it will be interesting to see whether games like Quantum Break can finally run in 4K/Ultra with 60fps. It will also be interesting to see for how long this GPU will run games with 60fps on 4K/Ultra settings!