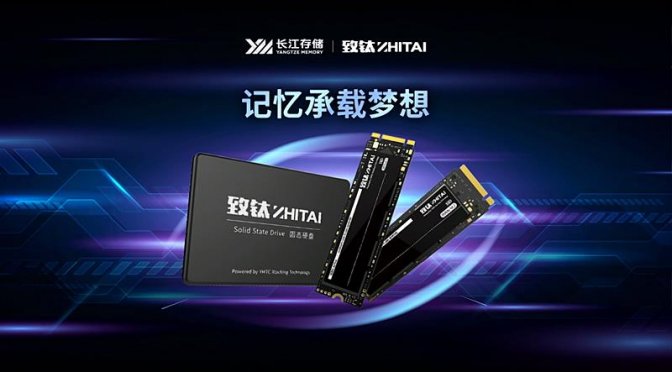 The chipmaker has recently launched the two new SSDs, the PC005 and the SC001, under the ZHITAI sub-brand. These SSDs use 64-layer 3D NAND chips that are manufactured with the Xtacking 3D NAND technology. This 64L 3D NAND flash device represents the first major competitive semiconductor product to come out of China’s state-backed investment in cutting-edge memory chips. There is no question that this will disrupt the 52?billion dollar NAND memory market, and also its respective market leaders such as Samsung, Kioxia, Western Digital, Micron, Intel, and SK hynix.

YMTC’s 64L 3D NAND device is a disruptor not only because it is offered by a significant new entrant, but because of its Xtacking architecture. YMTC is already on track for 128-layer QLC (quad-level cell) 3D NAND offerings that max out at 1.6 Gbps. This was revealed back in April. Given YMTC’s recent collaboration with ‘Phison’, we can assume that the drives are using a Phison controller, though it can be a custom controller from ‘Silicon Motion’ as well.

YMTC currently offers two SSD models, the PC005 and SC001 active, both having capacities of 256GB, 512GB and 1TB, respectively. The PC005 has a limited five-year warranty, whereas the SC001 has a shorter three-year warranty given by the company. The PC005 Active is a standard M.2 2280 model that makes use of the PCIe 3.0 x4 interface. The sequential read and write speeds have been rated for 3,500 MBps and 2,900 MBps, respectively.

Due to Xtacking architecture in which periphery circuits and memory cell operations are processed on a separate wafer, the array efficiency and memory bit density are considerably higher than conventional 3D NAND such as Samsung 64L V-NAND and KIOXIA/WD 64L BiCS NAND. For example, YMTC 64L 256 Gb die bit density is 4.41 Gb/mm2 which is higher than Samsung 64L 256 Gb die (3.42 Gb/mm2), and comparable to Micron/Intel 64L CuA FG 256 Gb TLC die (4.40 Gb/mm2) The NAND memory array efficiency on the die for YMTC 64L shows more than 90 %.

Since YMTC Xtacking uses Wafer-to-Wafer bonding technology, the NAND array is upside-down on periphery circuits. The process integration consists as (1) Metal 1 through Metal 4 for periphery circuits on a wafer, (2) NAND array with a source plate (SP) and Metal 1’ through Metal 3’ on a separate wafer, (3) Wafer-to-Wafer bonding to connect M4 and Metal 3’, (4) Through SP Via and Metal 5. Here, Metal 1’ is for BL.

NAND array consists of the same number of total gates compared to KIOXIA/WDC BiCS 64L 3D NAND. Bit-line half pitch for the device is 20 nm, which means they use a double patterning technology (DPT) likely with self-aligned double patterning (SADP). They do not use any type of metal straps to connect bit lines with NAND channels, which is different from Samsung’s 64L V-NAND array structure. Top select gate (TSG) cut process is also used on array.