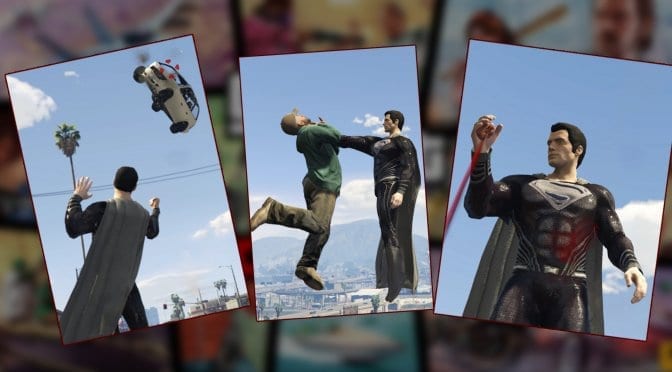 JulioNiB has released a Superman Mod for Grand Theft Auto 5, that is currently available for download to everyone. This mod is based on JulioNiB’s older Superman mod, and promises to be the ultimate/best Superman mod for GTA 5.

This mod introduces super strength, super velocity and supersonic flight. It also enables health regeneration and introduces a sun energy feature. As such, Superman can regenerate his energy with the power of the Sun.

JulioNiB is a really talented modder and has released a lot of mods for GTA 5. Thus, we suggest downloading most, if not all, of them. For instance, there is a Grand Theft Auto 5 Marvel Thanos Endgame mod. There is also PS4 Marvel Spider-Man mod. Furthermore, you can find a Predator Mod, an X-men Magneto Mod, a Hulk Mod. You can also find a Dragon Ball Mod, a Flash Mod, a Green Goblin Mod and a Ghostrider Mod.

You can download this mod from here, and you can find some installation instructions here.