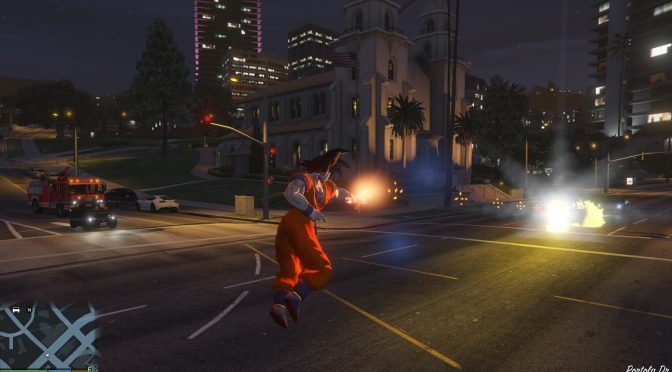 Talented modder ‘JulioNIB’, best known for his Hulk, Ghost Rider, Iron Man and Crysis mods for GTA V, has released a new mod that brings Son Goku from Dragon Ball to Rockstar’s open world title. And it’s one incredible mod that most DBZ fans should try, even though it’s full of glitches.

Going into more details, JulioNIB’s mod allows players to control Son Goku. Son Goku can transform into SSJ, SSJ2, SSJ3 and SSJ4. These transformations give Goku incredible powers as he can punch cars, grab helicopters and throw huge trucks without any problem at all. Goku can also fly and he can use his Instantaneous Movement, as well as Destructo Disc, Ki Blast, Kamehameha and Genki Dama.

Now as we’ve said, there are many bugs and glitches with this mod. Not only that, but the animations are not as polished as those found in Dragon Ball Unreal or in Earth’s Special Forces. Goku also walks like an ape.

Still, and despite its flaws, this mod is hilarious and can be a lot of fun. Yeap, that’s the word; fun. This will put a smile on your face and is not meant to be taken seriously. It’s just pure fun.