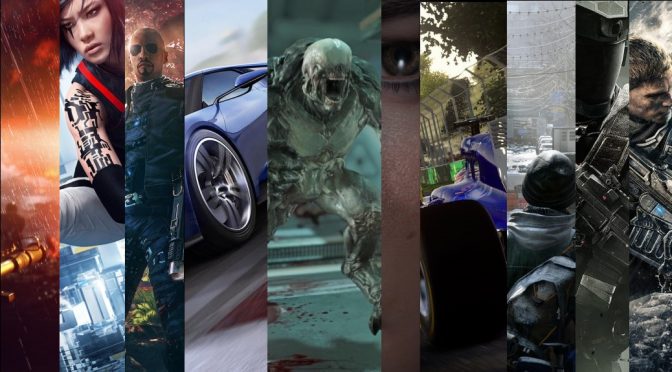 And it’s that time of the year again. We know that a lot of you have been looking forward to our annual “Top 10 most optimized PC games” article. For this list, we tested all the games that were released in 2016 (and for which we had a PC Performance Analysis article). As such, we are judging their final 2016 versions as some developers have released noteworthy patches for their titles that that improve overall performance and stability.

As we’ve already stated, we judge games based on their PC performance optimizations. A game that has been optimized for the PC is one that can scale on multiple CPU cores and multi-GPUs, that is not plagued by ‘console-ish’ side effects (like really low FOV, controller only on-screen indicators and mouse acceleration/smoothing issues), that packs a respectable amount of graphics options to adjust, and that – above all – looks and runs great on a variety of PC systems.

In short, we’re examining a game’s technical aspect, meaning that not only must the engine scale well on modern-day hardware, but the developer must also ensure that things like PC specific graphical features, PC technologies (like SLI and Crossfire) and PC controls are properly implemented.

Believe it or not, we had a lot of trouble picking only ten games. Yes yes, we got some really awful PC games in 2016 (like Dishonored 2 and Mafia III, however we also good some really stellar PC versions for a lot of triple-A games. Ubisoft’s STEEP performs great on the PC platform, as do Dead Rising 4, Overwatch, Killer Instict, Titanfall 2 and Deus Ex: Mankind Divided. These games almost made it to our Top 10 list, proving that 2016 was actually a great year (at least regarding the tech state of PC games).

So withour further ado, here are our top 10 most optimized PC games of 2016 (navigate the list via pages).

Rise of the Tomb Raider is a game that saw noticeable improvements via its post-release patches. NIXXES has added support for DX12 that improved performance on a variety of scenes (that were limited by the increased draw calls in DX11), has implemented NVIDIA’s VXAO for DX11, slightly improved overall performance and optimization, and NVIDIA owners could fully utilize their GPUs thanks to some custom SLI bits. Due to the game’s inability to scale on older GPUs, however, Rise of the Tomb Raider is placed in the 10th place of our list.

“All in all, Rise of the Tomb Raider performs very good on the PC, provided you are equipped with a high-end single GPU. Rise of the Tomb Raider is a GPU-bound title, and can run without performance problems on a modern-day dual-core Intel CPUs. The game needs a modern-day GPU in order to be enjoyed, however it can run with more than 30fps on older GPUs like the NVIDIA GTX680. By also lowering the in-game resolution, owners of weaker systems can hit a constant 60fps at the cost of the overall image quality. We are also happy to report that we did not notice any mouse acceleration or smoothing issues, and that Crystal Dynamic and Nixxes have included a lot of options to tweak.”

“All in all, Forza Motorsport 6: APEX looks and runs amazingly well on the PC. The game scales well on older PC systems, and its “Dynamic” option is a feature that more developers should offer in their games. And while there is no online support in Forza Motorsport 6: APEX, Turn 10 Studios promised to offer wheel support via a future patch. Oh, and let’s not forget that this a free game, that it looks gorgeous, and that it’s the best showcase for Microsoft’s DX12 API (at least for now).”

F1 2016 is also a racing game that impressed us. Powered by Codemasters’ EGO Engine, F1 2016 scales amazingly well on multiple threads, looks beautiful, and runs well on a variety of systems. Codemasters did an excellent job and its EGO Engine has evolved into an incredible engine for racing titles.

“All in all, F1 2016 is a really polished product. Codemasters has included a number of wheel settings, we did not experience any crashes, there are some interesting camera options/tweaks, the game looks beautiful, there are a lot of graphics settings to tweak/adjust and it scales wonderfully on multiple CPU cores.”

Shadow Warrior 2 runs and looks great on the PC platform. While the game suffered from some scenes that were a bit unoptimized, it can be fully enjoyed with more than 60fps even on dated PC systems. Flying Wild Hog has offered a nice amount of graphics settings to tweak, the game scales well on multiple CPU threads, and feels like a polished PC title.

“All in all, Shadow Warrior 2 runs and looks great on the PC platform. While there are some scenes that suffer from optimization issues (mainly due to the DX11 API and the game’s inability to ideally/optimally scale on multiple CPU threads), the game runs with constant 60fps even on dated PC systems. It will be nice if Flying Wild Hog addresses these issues in a future patch, however – and its in current state – Shadow Warrior 2 does not require a performance patch in order to be fully enjoyed!”

While Tom Clancy’s The Division was downgraded from its initial reveal, Massive Entertainment’s title is still a great looking title. Massive Entertainment has included a lot of graphical options to tweak, the game scales well on both multiple CPU cores/threads and multi-GPUs, performs great on the PC and is scalable on a variety of PC systems, and the team recently added DX12 support that appears to be performing similarly – or at least slightly better – than DX11.

“Tom Clancy’s The Division is not as impressive as its E3 2013 demo. We know that, Massive knows that, Ubisoft knows that, everyone knows that. Let’s accept this fact and move along. In its current state, Tom Clancy’s The Division is a really impressive – visually – open-world game that pushes some of the best visuals we’ve ever seen, and a game that can look great even at High settings.”

Mirror’s Edge: Catalyst is powered by DICE’s amazing Frostbite 3 Engine. As such, the game scales incredibly well on multiple CPU cores/threads, has an amazing art style, looks and performs great on the PC platform, and is one of the few titles that benefits from Hyper Threading (due to the engine’s amazing multi-threading capabilities).

“Overall, Mirror’s Edge Catalyst looks and performs amazingly well on the PC platform. DICE has gone the extra mile and implemented the “Hyper” settings, has included a FOV slider, there are proper on-screen keyboard indicators and we did not encounter any mouse acceleration issues. We would love to see some more extended graphics settings to tweak though as the ones that are available are nowhere close to those found in the Battlefield games, but that’s our only minor complain about Mirror’s Edge Catalyst.”

Believe it or not, we were utterly surprised by the PC version of Call of Duty: Infinite Warfare. Call of Duty: Infinite Warfare is easily one of the most optimized PC games of 2016 as it can take advantage of numerous CPU cores/threads – while at the same time running with more than 70fps on modern-day dual-cores – and looks amazing on the PC. Infinity Ward did an amazing job.

“All in all, Call of Duty: Infinite Warfare performs incredibly well on the PC, and is one of the most optimized PC games of 2016. The game comes with numerous graphics settings to tweak, mouse smoothing is disabled by default (though there is an option to enable it if you feel like it), the game runs amazingly well even on dated dual-core CPUs, and it offers – for the most part – beautiful visuals. Tech wise, Infinity Ward did an excellent job with the PC version of Call of Duty: Infinite Warfare.”

Normally, Battlefield 1 would be even higher on our list. However, DICE has a tendency of messing things up after a game’s launch. As such, the team has downgraded the PC version for no apparent reason. DICE has released a massive new update for Battlefield 1, however it did not address the visual issues that have been reported. Nevertheless, Battlefield 1 remains one of the most beautiful PC games of 2016. The game looks awesome and runs incredibly well on the PC platform.

“All in all, Battlefield 1 is a polished product that performs incredibly well on the PC platform. Thanks to the Frostbite 3 Engine, Battlefield 1 is among the most optimized PC games of 2016 and even though it looks spectacular, it does not require a high-end GPU. However, and due to its dynamic and chaotic nature, the game does require a high-end CPU in order to be enjoyed on Ultra settings. We also strongly suggest quad-core owners to enable Hyper Threading as they will see noticeable performance improvements in this particular title. And yes, these CPU requirements are justified as the terrain deformation and overall destruction system play a key role in Battlefield 1.”

Surprise surprise everyone. After the underwhelming PC Ultimate Edition of Gears of War, The Coalition redeemed itself with a stunning PC version of Gears of War 4. Gears of War 4 runs amazing on the PC, is one of the most beautiful games, comes with a plethora of graphics settings to tweak, features a detailed built-in benchmark tool, and is the best title to showcase DX12 (at least for now).

And we are pretty sure that you all saw that coming. After its awful id Tech 5, id Software spent a lot of time and built one of the best engines to date. DOOM and id Tech 6 impressed everyone with its performance/visuals ratio, and its recent Vulkan support significantly improved performance on both AMD and NVIDIA GPUs. id Software has included a lot of graphics settings to tweak, and there is a highly detailed overlay statistics tool. DOOM is beautiful and runs amazingly fast on the PC platform, and it’s the most optimized PC game of 2016.

“All in all, DOOM is one of the most optimized PC games of 2016. The game looks beautiful, features one hell of options to tweak, comes with spectacular built-in performance metrics, sports proper on-screen keyboard indicators, and runs superbly on the PC platform (the fact that AMD’s GPUs under-perform here is something that we should all blame AMD for, and not id Software). There are some minor gripes (like SLI not performing amazing from the get-go and the lack of Vulkan support), however DOOM – even in its current state – is a truly polished product!”