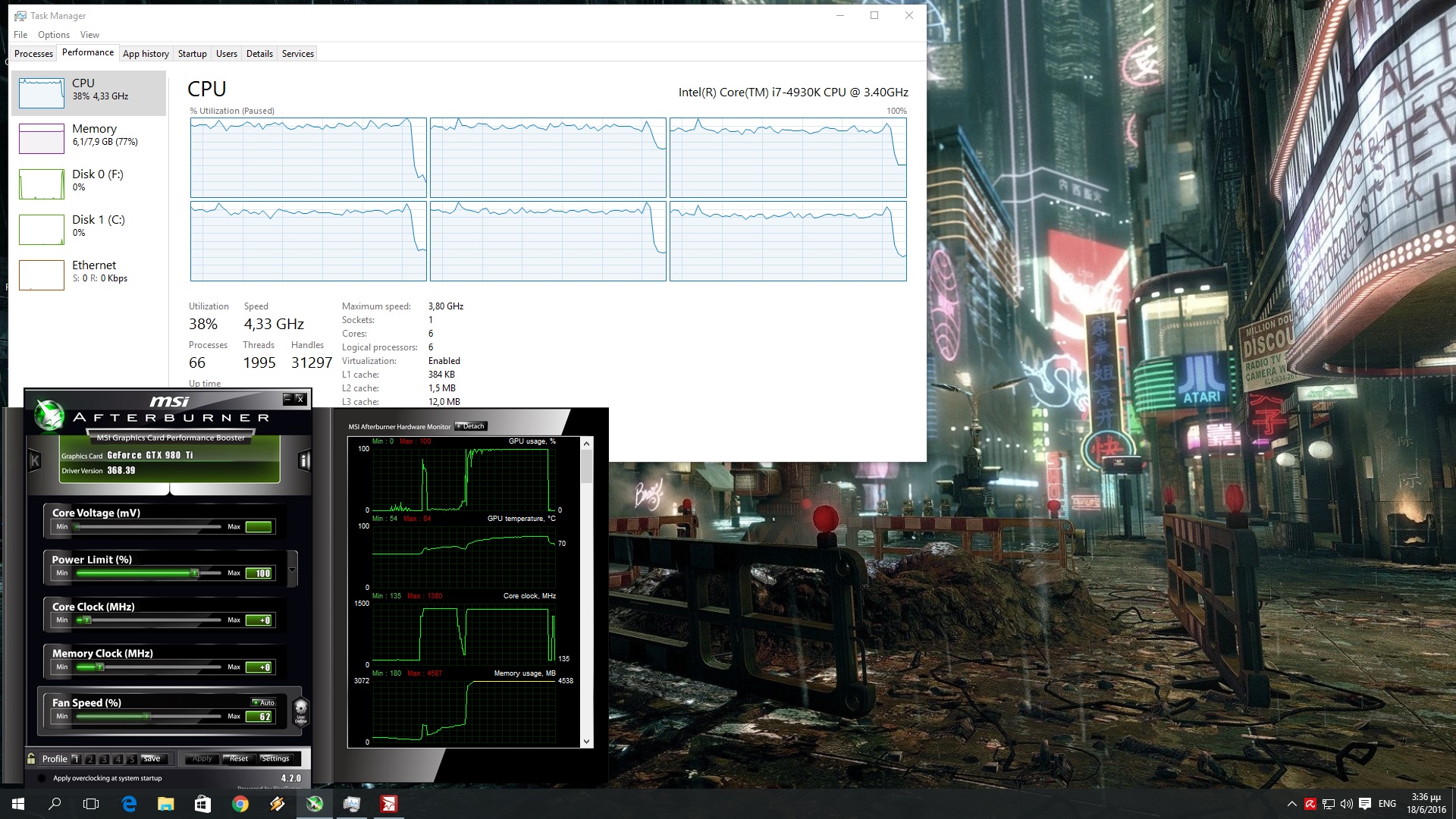 Mirror’s Edge Catalyst ran with constant 60fps on our GTX690 at 1080p on Ultra settings. In order to avoid any possible VRAM limitation, we had “GPU Memory Restriction” enabled. As a result of that, and despite some really low-resolution textures that are caused by this setting, the game was running perfectly fine on the GTX690 (SLI scaling was great).

Given the fact that Mirror’s Edge Catalyst was running fine on our GTX690, we were wondering whether our GTX980Ti was able to offer a constant 60fps experience on the game’s max “Hyper” settings. And we are happy to report that everything was running ideally. NVIDIA’s GTX980Ti is able to handle Mirror’s Edge Catalyst with more than 60fps at all times at 1080p on “Hyper” settings.

In order to find out how the game scales on various CPUs, we simulated a dual-core and a quad-core CPU. Frostbite 3 scales incredible well on multiple threads, and Mirror’s Edge Catalyst benefits from the presence of multiple threads. 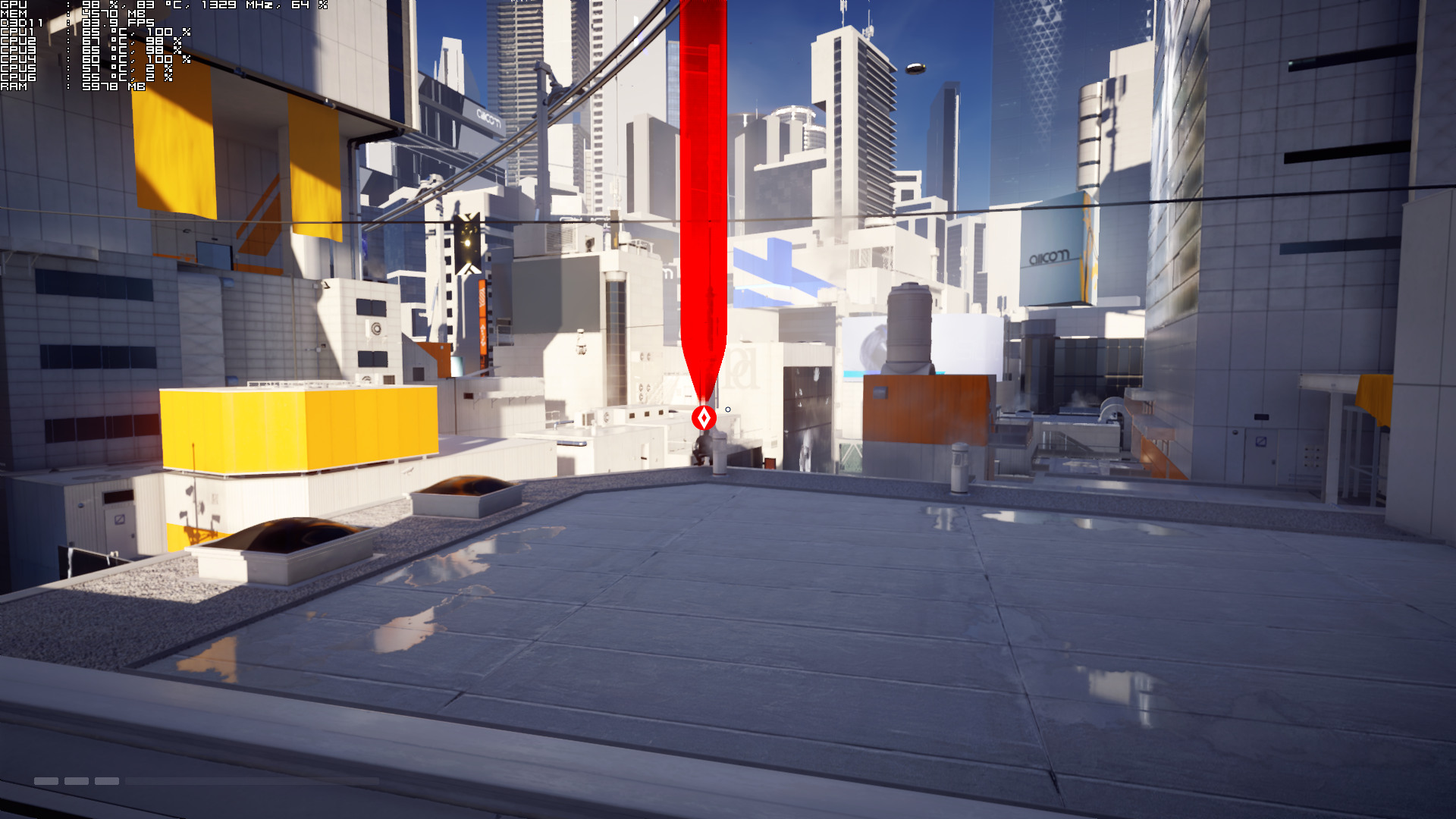 Graphics wise, Mirror’s Edge Catalyst looks amazing. The game packs some really impressive reflections, has an incredible art and level design, features highly detailed characters, is colourful, sports an amazing lighting system and most of its textures are of high quality. We’ve already shared some 4K screenshots so that you can admire for yourselves the beauty of Mirror’s Edge Catalyst. After all, it’s well known that Frostbite 3 offers great visuals and phenomenal performance, and Mirror’s Edge Catalyst is no exception to that. DICE has also included a number of flashing/ad walls in the background that cleverly hide the environmental pop-ins while running, though you’ll still be able to notice a few.

Overall, Mirror’s Edge Catalyst looks and performs amazingly well on the PC platform. DICE has gone the extra mile and implemented the “Hyper” settings, has included a FOV slider, there are proper on-screen keyboard indicators and we did not encounter any mouse acceleration issues. We would love to see some more extended graphics settings to tweak though as the ones that are available are nowhere close to those found in the Battlefield games, but that’s our only minor complain about Mirror’s Edge Catalyst. 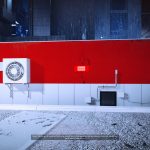 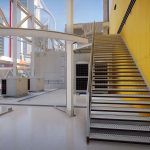 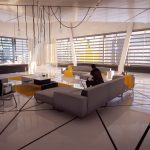 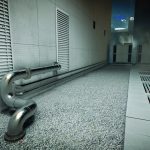 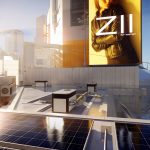 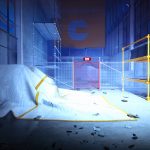