Tom Clancy’s The Division is one of the most anticipated releases of 2016. As we’ve already showcased, there are some differences between the E3 2013 build that wowed everyone and the final version. So it’s time now to see how this game performs on the PC platform.

As always, we used an Intel i7 4930K (turbo boosted at 4.0Ghz) with 8GB RAM, NVIDIA’s GTX690, Windows 8.1 64-bit and the latest WHQL version of the GeForce drivers. NVIDIA has already included an SLI profile for this title that comes with amazing SLI scaling, therefore you won’t have to mess around with the NVIDIA Inspector Tool in order to enable it (or find better SLI compatibility bits).

Tom Clancy’s The Division is a game that really stresses the GPU, as this was the first game (excluding games in which SLI was not working at all) in which our GTX690 was unable to maintain constant 60fps at 1080p and with Ultra settings. In order to keep a minimum framerate of 50fps, we had to use the following settings (a mix of Ultra and High settings). With these settings, the game was running between 50fps and 75fps.

We also ran our GTX690 in Single-GPU mode. A single GTX680 was unable to keep a minimum framerate of 50fps or 60fps even at High settings. Thankfully, the game did run with a minimum of 50fps at Medium settings. This shows how scalable the Snowdrop engine actually is.

But what does this game need in order to be fully enjoyed? Well, time to test our brand new NVIDIA 980Ti. Do note that we’ll be using EVGA’s 980Ti FTW GPU; a GPU that is overclocked by default. AMD fans, bear with us as we’ve not forgotten you. By the end of this Summer, we expect to have a dual-Fiji GPU.

Tom Clancy’s The Division can really stress NVIDIA’s high-end GPU as Massive Entertainment and NVIDIA have included some demanding graphical effects (like NVIDIA’s HBAO+ and NVIDIA’s PCSS and HFTS shadowing techniques). At 1080p and with the default Ultra settings, we were averaging around 80fps. When we increased the quality of Reflections to High and enabled HBAO+, our minimum framerate dropped at 62fps. When we enabled NVIDIA’s HFTS tech, our minimum framerate dropped at 45fps. In short, NVIDIA’s new shadowing system is only for owners of high-end SLI systems. Unless of course you can leave with a sub-50fps gameplay. 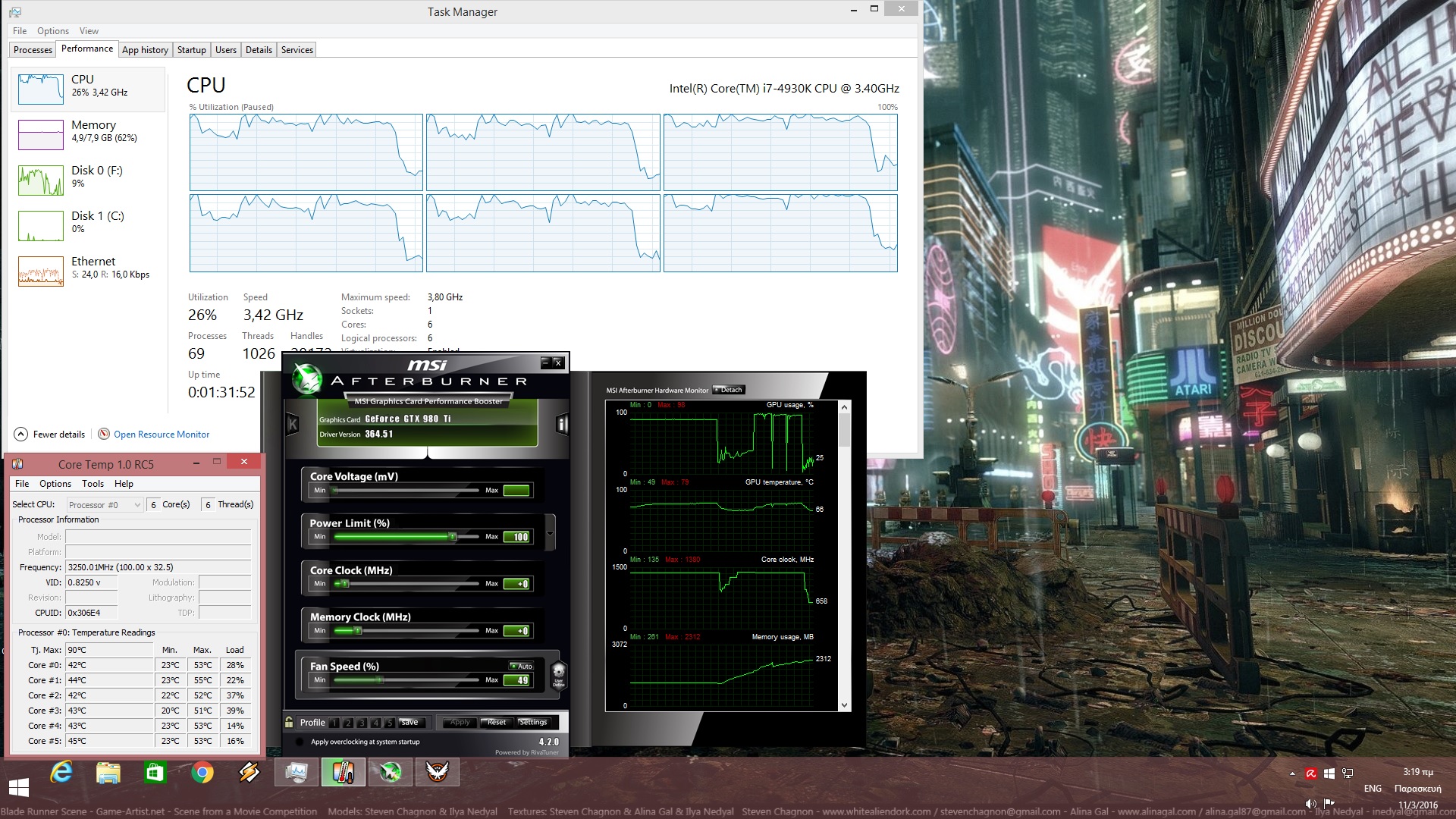 It’s pretty obvious from the above that Tom Clancy’s The Division is scalable on multiple GPUs and CPUs, and requires a high-end GPU in order to be fully enjoyed at Ultra settings. However, and as we’ve already showcased, the differences between Ultra and Low are not that great. Yes, you will notice those blocky shadows and the lack of reflections and ambient occlusion. However both the game’s lighting system and assets/models will remain the same. As a result of that, the game can look good at Low settings, great at High settings, but not that wow-ish at Ultra settings (at least for what the game requires).

But make no mistake. While the game does not look as impressive as its E3 2013 demo, it is easily one of the best open-world games we’ve ever seen. The game currently suffers from some initial texture streaming issues (it takes a while to load the textures the first time you run the game) and some latency issues while shooting car glasses. Our guess is that this is due to the game’s servers, so here is hoping that Massive will further optimize them.

Tom Clancy’s The Division looks amazing. Massive Entertainment has come really close to the real New York city. The game characters are highly detailed, and the lip-syncing is as good as the one found in the Assassin’s Creed games. The environmental effects are fantastic. The game’s foggy snowing environments are a beauty to behold thanks to the Volumetric lighting, and the destruction system – while not as advanced as the one showcased back in 2013 – is among the best we’ve seen in an open-world title. The game features dynamic weather, a full day-night cycle, dynamic material shaders (that were not used at their full potential sadly) and amazing reflections. Not only that, but the game is full of nice little touches and easter eggs.

In conclusion, Tom Clancy’s The Division is a GPU-bound title. Since the game can really stress NVIDIA’s high-end GPU when specific NVIDIA features are enabled, we suggest avoiding them if you don’t own a powerful GPU. Thankfully, the game scales incredibly well on older GPUs. Moreover, while the Snowdrop engine scales exceptionally well on multiple CPU cores, the game can run with constant 60fps even on a modern-day dual-core CPU (that supports Hyper Threading). Snowdrop is definitely among the best engines we’ve seen, so kudos to Massive Entertainment for achieving something like that.

Massive Entertainment has also included a lot of graphical options to tweak, the ability to remove Chromatic Aberration, there are no mouse acceleration/smoothing issues, the game plays fantastic with mouse+keyboard, there are proper keyboard on-screen indicators, and apart from some minor latency issues we did not encounter any server issues.

Tom Clancy’s The Division is not as impressive as its E3 2013 demo. We know that, Massive knows that, Ubisoft knows that, everyone knows that. Let’s accept this fact and move along. In its current state, Tom Clancy’s The Division is a really impressive – visually – open-world game that pushes some of the best visuals we’ve ever seen, and a game that can look great even at High settings.