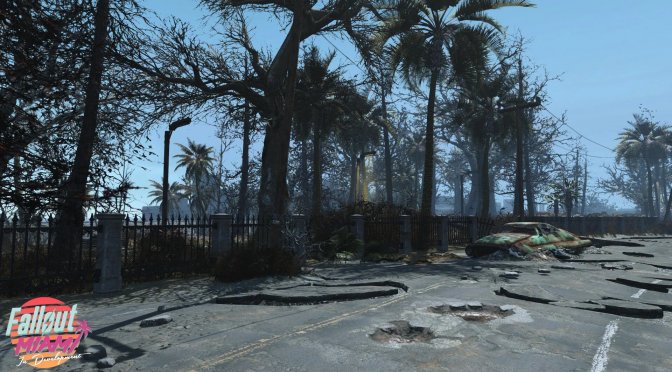 The team behind Fallout: Miami, an upcoming DLC-sized fan expansion for Fallout 4, has released a new trailer. This trailer features brand new WIP in-engine footage, showcasing some of its environments.

Fallout: Miami is a brand new worldspace that promises to have a gripping main quest. Moreover, this fan expansion will pack side-quests, equipment, settlements, and a host of interesting characters and companions.

Players will uncover the truth behind some mysterious disappearances. Furthermore, they will take part in the age-old struggle between Order and Freedom.

The city in Fallout Miami will feature several districts, each with its own unique locations and atmosphere. Below you can find some more details about them.

Speaking of Fallout 4, we suggest taking a look at these other mods for it.  Whispering Hills is a cool Silent Hill mod and The Wilderness Mod adds a worldplace that is as big as Nuka World. Moreover, Fallout 4: Sim Settlements 2 Chapter 2 adds new quests and a game mode. Furthermore, this mod aims to overhaul the AI of the NPCs. There is also a 3.7GB Mod that adds 14 different weapons. Not only that, but the Galac-Tac Mercs and Music Mod is yet another DLC-sized expansion that features 30 new quests. Lets’ also not forget this mod that adds an unofficial Photo Mode. Obscurum IV – Statesec Mod adds a new game world with new enemies and weapons. And lastly, this mod adds new creatures, world bosses and crafting recipes.