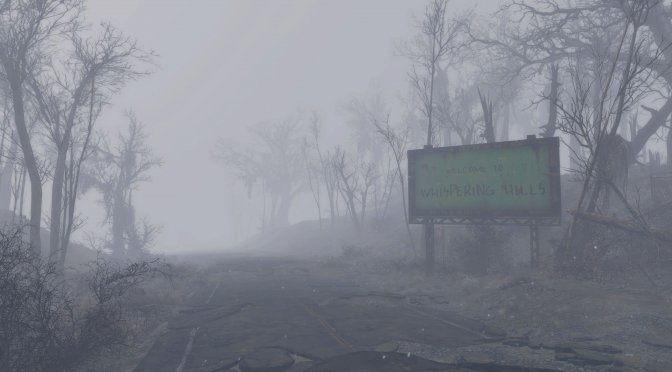 Back in February, we informed you about a Silent Hill mod for Fallout 4. And today, we are happy to report that its second episode is available for download.

As the modder states, Whispering Hills basically turns Fallout 4 into a Silent Hill-like Nightmare. From now on you will be surrounded by Thick Fog, strange sounds and occasionally being dragged into an otherworld where monsters (SirenHead, Mumblers, Lyingfigures, Ghouls, Silent hill Nurses, Twin head Screamers and Dogs) await you. Moreover, Pyramidhead is also present in this mod.

Whispering Hills overhauls all background sounds of the Commonwealth and replaces them with Spooky and creepy ones from Silent Hill. Moreover, it overhauls Combat Music and adds 10 varieties of Fog Weathers. Additionally, it packs a new quest line with voiced NPC and a complete new world to explore.

Episode Two adds a new location, the Alchemilla Hospital. Additionally, it unlocks a large part of the City. Furthermore, its team has added a lot of new music and fixed tons of bugs.

What’s also cool here is that the team was able to hire Thessaly Lerner (the original voice actress for Silent Hill’s Lisa). Lerner will once again voice Lisa as the team is bringing her back.