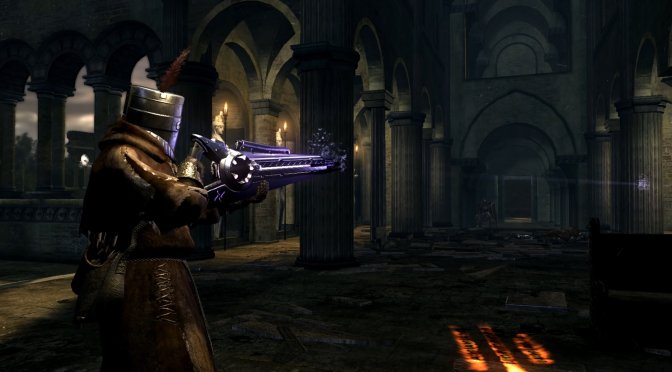 Back in February 2020, we shared an amazing mod that turned Halo into a Kart game. Created by InfernoPlus, players could use the Warthog in order to race against other players. And yesterday, the modder released a brand new version of his Remastest mod for Dark Souls.

Dark Souls: Remastest Version 2.0 adds to the game numerous weapons from Halo: Combat Evolved. Yeap, you can now experience Dark Souls with guns. This will obviously make the game a lot easier, however, it’s something that most Dark Souls and Halo fans will find really cool.

However, Dark Souls: Remastest is not just a weapons mod for Dark Souls. For instance, the mod adds new multiplayer modes (like Team Deathmatch), as well as MP maps from Halo: Combat Evolved.

Version 2.0 introduces ten more maps to Arena Plus. Additionally, it adds new items to the single-player campaign, like the Squirrel Ring. By using this ring, players can parkour in this game by allowing them to jump high in the air. Players can also use a new ability, Soul Vault, in order to gain access to restricted areas. Furthermore, this new version of Dark Souls: Remastest adds Special Attacks.

In short, this is one of the best mods for Dark Souls, and we highly recommend downloading it from here. There are versions for both Dark Souls Legacy and Dark Souls Remastered.

Speaking of Dark Souls, you may be also interested in the following mods for the Remastered version. Do note that the following mods may be incompatible with DThere is a 6GB HD Texture Pack that overhauls maps, objects and enemies. There is also another graphics mod that improves the fog, lighting, light scattering, shadows, color correction and contrast of all areas. Additionally, this Ultra HD Texture Pack adds more than 100 high-quality 4K textures.

Dark Souls Except It's Incredibly Cursed