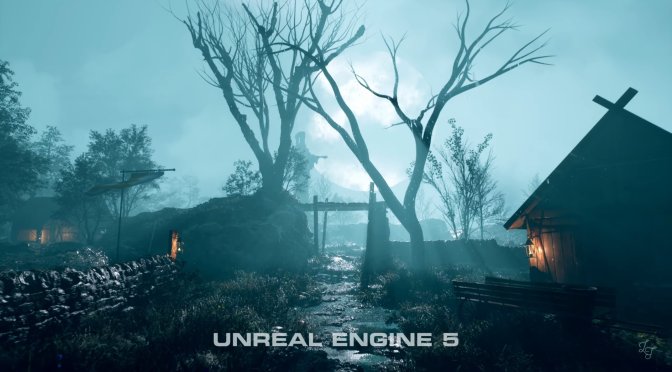 “This scene started to incorporate a lot of other more complex elements like the rain and the water ripples, along with more emphasis on the exponential height fog to capture a more artistic lighting environment. A combination of self-modelled and third-party assets were used, along with some Quixel Megascans for the ground and the trees.”

For those wondering, the rain was a Niagara system using a physical mesh-based raindrop. The water was simulated in Blender using dynamic paint vertex displacement and then bought into Unreal Engine 5 using alembic geometry cache.

This fan recreation also heavily uses Nanite. For instance, the moon was actually a nanite physical UV sphere with an emission shader.

Lastly, and speaking of Unreal Engine 5 fan remakes, we also suggest taking a look at the following ones. Last month, we shared a Half Life 2 Fan Remake in Unreal Engine 5. This Zelda Ocarina of Time UE5 Remake also looks amazing. Additionally, this fan remake of Final Fantasy IX looks incredible. And, finally, here are an Oblivion fan remake, a Silent Hill fan remake, a World of Warcraft remake, and a Skyrim remake.

Dragon Age in Unreal Engine 5: The Fallow Mire in [UE5]