Cyberpunk 2077 might be filled with some seizure-triggering moments, hence the warning issued by Liana Ruppert. CD PROJEKT RED was quick to respond on Twitter as well, and the team plans to add a proper seizure warning in this game. 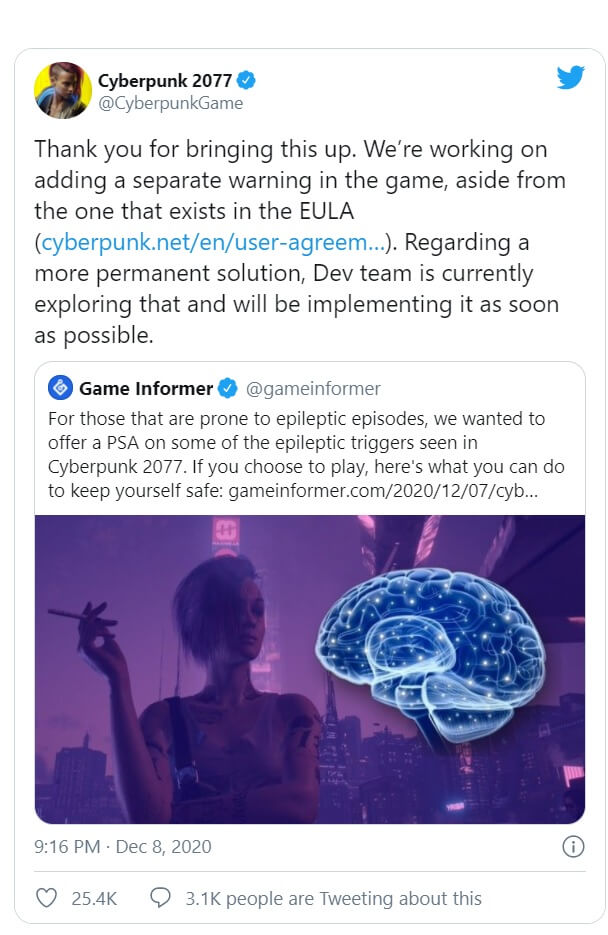 The developers are also working on a permanent solution, and will implement it as soon as possible. For the time being, CDPR will add a warning in the game. The game’s EULA already has a seizure warning though, but no one actually reads it. This obviously won’t affect every gamer out there, but only those who are prone to epileptic triggers.

Liana Ruppert played through Cyberpunk 2077 and suffered “one major seizure”. But more importantly, the big problem with seizures while playing Cyberpunk 2077 are the Braindances, which let players use Braindances to access another person’s memories.

Braindance is an immersive simulation of the events another person witnesses, feels, and remembers in their life that’s recorded in the brain. Braindances enjoy wide use in the Cyberpunk world. They are most often used for entertainment (the new version of video games/TV/movies/breakbeats, or types of entertainment that combine them together).

“Pretty much everything about this is a trigger and this is something that caused me to have a grand mal seizure when playing to help with our review. This is also a trigger on many levels, starting with the device itself”, Ruppert wrote.

It appears the game is designed to cause seizures in some gamers, so CDPR should have issued a massive seizure warning in the beginning.

Ruppert writes that, “After playing Cyberpunk 2077 for the past week and a half, there is an epileptic warning I’d like to offer to those Samurai heading into Night City. Enjoy your time, but here is a heads up to do so safely if you’re vulnerable to epileptic triggers.

A common trigger for epileptics in media are rapid blinking lights, specifically of the red and white variety.

During my time with Cyberpunk 2077, I suffered one major seizure and felt several moments where I was close to another one.”

Ruppert continues, “When “suiting up” for a BD, especially with Judy, V will be given a headset that is meant to onset the instance. The headset fits over both eyes and features a rapid onslaught of white and red blinking LEDs, much like the actual device neurologists use in real life to trigger a seizure when they need to trigger one for diagnosis purposes. If not modeled off of the IRL design, it’s a very spot-on coincidence, and because of that this is one aspect that I would personally advise you to avoid altogether.

When you notice the headset come into play, look away completely or close your eyes. This is a pattern of lights designed to trigger an epileptic episode and it very much did that in my own personal playthrough”.

To get more info on Cyberpunk 2077’s braindance, kindly refer to this article posted by GameRant.

CD Projekt RED has also revealed the official Ray Tracing and non-RT PC requirements for Cyberpunk 2077. Additionally, Cyberpunk 2077 is a DX12-only game, and will only work on Windows 7 and Windows 10.