And here we go. Apogee Software and 3D Realms released a press released in which they claimed that Gearbox Software owes Apogee more than $2 million in unpaid royalties and advance payments after Gearbox bought rights related to Apogee’s “Duke Nukem” video game, according to a breach of contract suit filed Friday in Texas state court.

Apogee, which does business as 3D Realms Entertainment, says Gearbox has failed to pay the money under the terms of a 2010 purchase agreement the companies inked, and claims the company has also barred 3D Realms from conducting an independent audit of the royalties Gearbox has earned.

As the complaint says:

“3D Realms has therefore been required to file this lawsuit to enforce the purchase agreement, to recover the amounts due and owing from Gearbox and to enforce the audit right provided by the agreement to enable it to conduct an audit of Gearbox’s royalties.”

“The reality is that 3D Realms received the full benefit of its bargain. Gearbox, in fulfillment of its commitments, enriched 3D Realms, saved 3DR from its debts and rescued 3DR from its failed dozen plus year attempt to ship Duke Nukem Forever.”

“Everyone wished that 3DR’s game was better received by the market for the benefit of gamers and profit to its creators. While 3DR might not wish the reality that the results make clear, 3DR turned out to be the only beneficiary of the deal. Gearbox Software, meanwhile, experienced damage to its credibility and loss of its money.”

In 2010, Gearbox purchased certain interests and intellectual property to develop future games based on “Duke Nukem,” including the rights to complete and sell games called “Duke Nukem Forever” and “Duke Begins,” according to the complaint.

Gearbox agreed to repay a $2.9 million loan that 3D Realms owed another software company and agreed that 3D Realms would receive a percentage of Gearbox’s royalties for future “Duke Nukem” games, according to the complaint. Gearbox also said it wouldn’t recoup any portion of the loan before it paid 3D Realms’ royalties, the complaint says.

3D Realms said the deal was one among friends, as Gearbox’s president had a long-standing friendly relationship with its principals.

3D Realms contends that the unpaid royalties on the $2.9 million exceed $800,000, and it also says that Gearbox has failed to pay royalties on $4.5 million it has received, resulting in a $1.3 million loss for 3D Realms, the complaint says. It also contends that Gearbox should send it more than $500,000 in future advances it has received, under the terms of their purchase agreement.

“Despite the assurance it provided to 3D Realms, Gearbox now claims that it is entitled to first deduct the full amount of the debt it assumed (i.e. the entire $2.9 million Duke Loan) before any royalty payments become due to 3D Realms. Thus, Gearbox is turning the tables.”

3D Realms is represented by Leonard Hirsch of Diamond McCarthy.

Kudos to Duke4’s forum members xMobilemux, The Duke Returns, NUKEMDAVE, Wesker500, Lunick and Green for the aforementioned information and image. 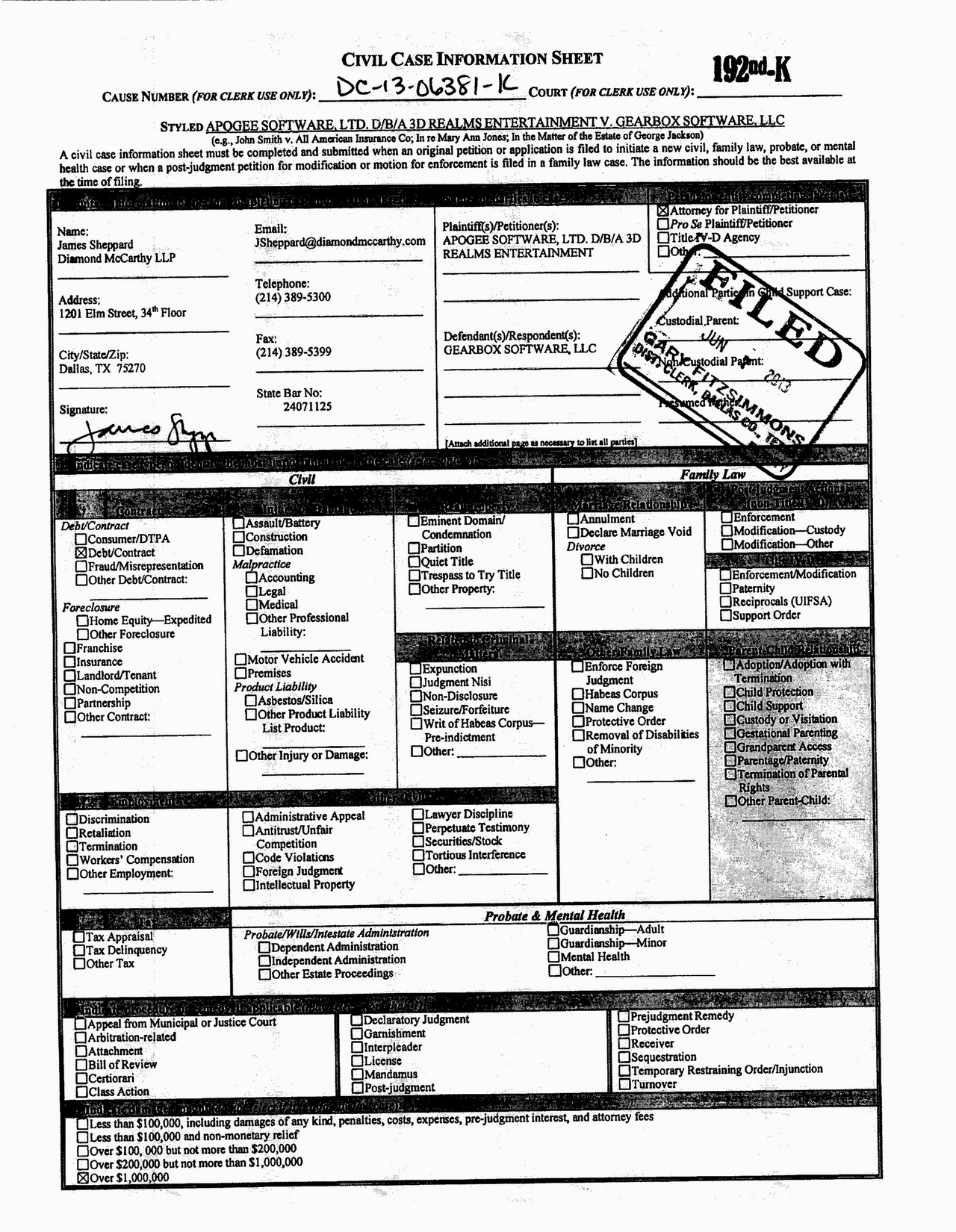