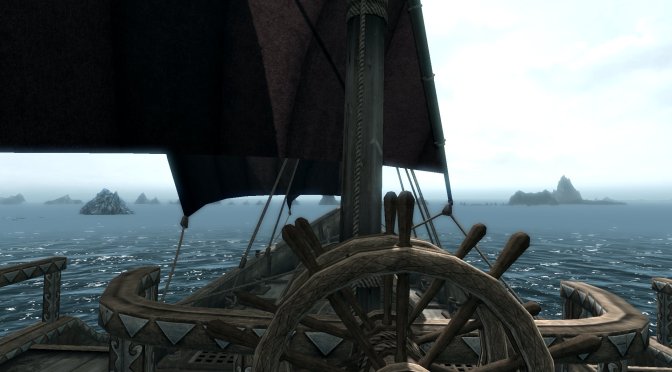 Moreover, this mod comes with The Pride of Teia, a big sailable ship and player home. Thus, players can sail in Teia or in Skyrim, from Dawnstar to Castle Volkihar and take their companions with them.

The Pride of Teia is a really big sailable ship with two fully functional interiors: a cabin and a basement. The doors in the interiors function in two directions: They teleport you either on that ship in Skyrim or on that ship in Teia.

You can download Tasheni’s The Pride of Teia from here. Make also sure to read its installation guide.

Lastly, and speaking of mods for Skyrim Special Edition, we also suggest checking the following ones. Wyrmstooth is an expansion-sized mod that adds new quests and dungeons. There is also a mod that brings elements from The Witcher games to Bethesda’s RPG. Dragon Hall Tavern is another 2GB DLC-sized mod for Skyrim, adding new quests, locations, arena & more. Then we have Land of Vominhem and Legacy of the Dragonborn. And finally, you should check out this Castlevania-inspired mod, this mod that adds to the game the Nemesis system from Middle-earth: Shadow of Mordor, as well as this sci-fi city fan expansion, Skyrim Together Reborn, and this RTS/City Building Mod.

Skyrim: Tasheni's The Pride of Teia