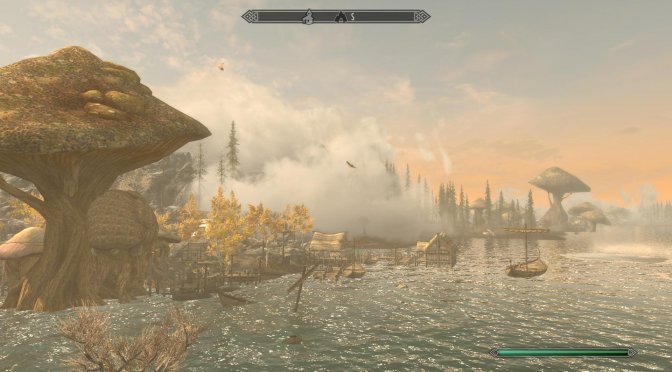 Modder ‘venjhammet’ has released a new fan expansion for The Elder Scrolls V: Skyrim. Land of Vominhem is heavily inspired by The Witcher 3’s Skellige and brings to the game a large archipelagic and cold land.

This expansion features five islands which are: the Mainland itself, Fallvern, Frostfang, Northwind Bane and Banefrost islands. Moreover, this expansion is available for both the Original and the Special Edition versions of Skyrim. This expansion is also roughly the size of Solstheim and has dozens of locations to discover and explore.

According to its description, Whiteshore Village is a small village found on the west side of the island. It is here that you will first arrive on the island via boat from Skyrim. This village has tavern, mine, blacksmith, apothecary and spell stores. Guards, jail and barracks are also available to keep the peace should you misbehave at the village.

Alongside this main village, the expansion features dozens of locations to explore such as dungeons, cave, mines and camps. It also comes with powerful enemies, unique enchantments of armor and weapons and unique spells. Furthermore, this expansion packs written quest and treasure hunts to keep you busy. It also has two powerful followers that can accompany you on your adventures. These followers are: a spellsword necromancer Khajit on Whiteshore Village and a Nord Barbarian west of Fallvern Island on a small knoll called Sea Breeze Cabin.

You can download this fan expansion for Skyrim from here, and for Skyrim Special Edition from here.