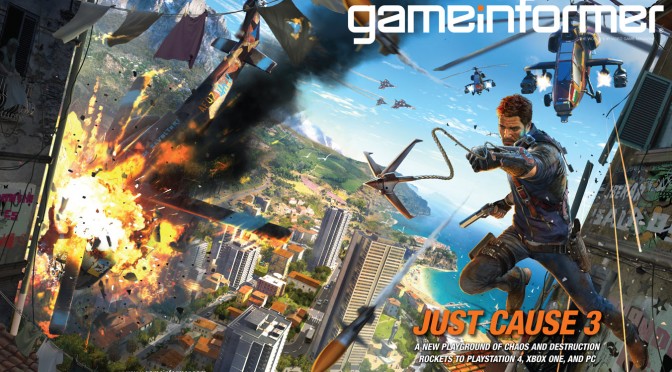 Square Enix and Avalanche Studios today unveiled Just Cause 3, a vast open-world action adventure, and the latest instalment in the much-loved Just Cause series. No further details have been unveiled, other than the fact that Juse Cause 3 will be available in 2015 for PC, PS4 and Xbox One. END_OF_DOCUMENT_TOKEN_TO_BE_REPLACED

Xbox-Underground shared today a bunch of screenshots of what seems to be the next instalment in the Just Cause series. According to Xbox-Underground, the following images are from the debug build of Just Cause 3 on Xbox One. Since Avalanche has not confirmed anything yet, we’re marking this as a rumor. And like all rumors, we strongly suggest taking it with a grain of salt. Nevertheless, we’re certain that Just Cause fans will be excited about these new images, so go ahead and enjoy them! END_OF_DOCUMENT_TOKEN_TO_BE_REPLACED

Admit it; you were kind of disappointed with the absence of both Mad Max and Just Cause 3 from this year’s E3. Yes, Just Cause 3 has not been officially revealed as of yet but what about Mad Max? Why did Bethesda decide to ‘ignore’ this open-world title? Well, good news everyone as Avalanche Studios will be showing ‘something it’s been working on’ real soon. END_OF_DOCUMENT_TOKEN_TO_BE_REPLACED

We already know that Avalanche Studios is working on three triple-A games. In fact, this information was revealed last February. Thankfully though, almost a year afterwards, we can share some new hints about the rumored third part of this explosive open-world franchise. According to the LinkedIn profile of Avalanche head Christofer Sundberg, Avalanche is working on an Unannounced Sandbox Action Game that is said to be a new installment in a very well-known game series. END_OF_DOCUMENT_TOKEN_TO_BE_REPLACED

Just Cause 2 was an incredible game, but lacked one feature that would give it a fresh air and that feature was no other than a Multiplayer mode, something that a lot of fans have been asking for. In case you’re wondering, the lack of it wasn’t due to the fact that Avalanche was concentrating on a Single Player experience. No no no. The reason behind the absence of a Multiplayer mode in Just Cause 2 was due to technical issues and it seems that this time around, Just Cause 3 will feature a proper, Multiplayer mode. END_OF_DOCUMENT_TOKEN_TO_BE_REPLACED