GameInformer’s December issue is out and the first details about the highly anticipated third part in the Just Cause series have been unveiled. First and foremost, Just Cause 3 will not support any MP modes. Yeap, you read that right. There won’t be any official Multiplayer mode in Just Cause 3.

Despite that, Avalanche will support the mod community, so expect some great things in its PC version (especially considering how amazing the MP mod was for JC2).

Furthermore, the game’s world will be the size as the one featured in JC2, and the game will be powered by a brand new engine.

Kudos to our reader ‘KRC24’ for sharing the following information with us!

-Former developers who worked on Ratchet, Infamous, AC, FC, Burnout all worked on this game.
-Full fly over map of the world showed oceans, huge land masses containing cities, islands, mountains (one with a giant skull on the side).
-There was a huge fortified base which the player found a small cave on a river nearby that allowed for a secret underground passage into the base.
-One structure had a huge bridge connecting two towers, you are able to blow up the bridge.
-New engine allows for much more verticality of the terrain.
-Story takes place in the Mediterranean, a fake city where Rico grew up. An evil dictator has taken over and you need to stop him. Not much connection to the last two games, a few references and former characters appear.
-Same balance of being fun and silly with the story. Will focus more on Rico but it wont be a heavy story game, more focused on the sandbox play.
-Game world is the same size as JC2.
-First mission is to free a small town. Controls are much more responsive. No longer need pinpoint aiming to attach the grapple. Parachute controls are more responsive.
-No more messing up in reeling in a guy or you pulling a guy, now it for sure works as you intend. You can shoot at a guy mid reel.
-Towns have tons of propaganda to destroy. You cannot throw C4 but now you have infinite C4.
-Guns feel much more powerful, have weight to them. Controls are better so player was flying around and shooting with ease.
-Damage makes the screen lose color except enemies will get brighter. No health packs, health regen. No dodge roll right now, they say they didn’t like it. Crouch is gone, they dont ever want the player to be in one place.
-Heat grows the more damage you do but you dont have to run away. You can kill the guard calling in reinforcements and stop further waves from coming in, ending the heat growth.
-Attaching to a helicopter allows you to instantly take out the pilot and take over, no QTE. Or you can hang from the bottom. Even plant C4 on the helicoper and let go, then blow it up. They took control and gunned the rest of the base.
-A checklist on the left side of the screen shows everything you have destroyed and what objects are left to clear the area.
-New remote teather retracting allows you to attach the tether to any object and have it retract. So a giant statue was pulled down by attaching the tether to the floor and retracting. The statue crumbles in different ways each time, the head stays in tact just in case you want to use it as a giant wrecking ball.
-This new mechanic allows you to slingshot enemies without needed a moving object. You can attach a guard to a wall, retract and cut mid retraction to sling shot them. Things get crazier since you can have 3 maybe more tethers going at once. Stuff liking making a bus a battering ram is possible.
-Liberated towns allow you to decrease heat, bring vehicles to the shop so it becomes a rebel drop. Drops no longer cost money, it is all free but has a cooldown timer.
-It is possible to upgrade every vehicle with any of the upgrades you find. As the game goes on you will get army grade vehicles.
-Wingsuit challenges is like pilotwings, there are rings to pass through, some harder ones offer bonuses. Restarting a challenge is far faster. You can activate the wingsuit with the press of a button just like the parachute. Best to use when going from high to low altitude.
-The final mission of the demo was a big base where the player has SAM missiles and helicopters firing at him. There was an infinite chaingun that you can now move and shoot with. You can blow up the SAM sites with C4 or now reprogram them to fire on the enemy helicopters.
-No multiplayer but they will support the mod community.

In addition, the official Steam page for Just Cause 3 went live, revealing the first official features for this new Just Cause game, as well as its logo. We’ve screen grabbed the page in case Valve takes it down.

The Mediterranean republic of Medici is suffering under the brutal control of General Di Ravello, a dictator with an insatiable appetite for power. Enter Rico Rodriguez, a man on a mission to destroy the General’s hold on power by any means necessary. With over 400 square miles of complete freedom from sky to seabed and a huge arsenal of weaponry, gadgets and vehicles, prepare to unleash chaos in the most creative and explosive ways you can imagine. 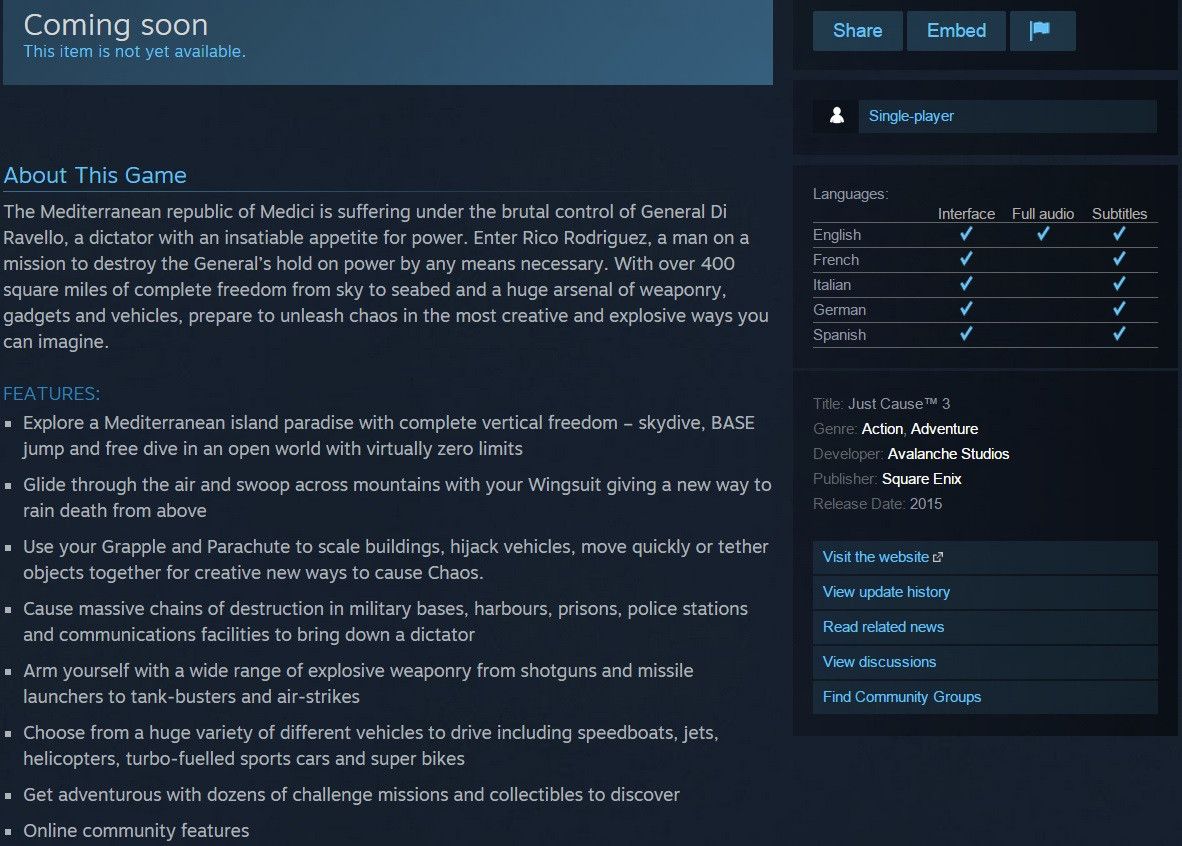