Back in 2016, Kojima Productions officially announced Death Stranding for both PC and PS4. However, and after Sony provided the team with the Decima Engine, the game was advertised as a PS4-exclusive. Still, Kojima never really denied a PC release, and here we are today with Death Stranding officially coming out on the PC. Thus, we’ve decided to benchmark it and see how it performs on the PC platform. 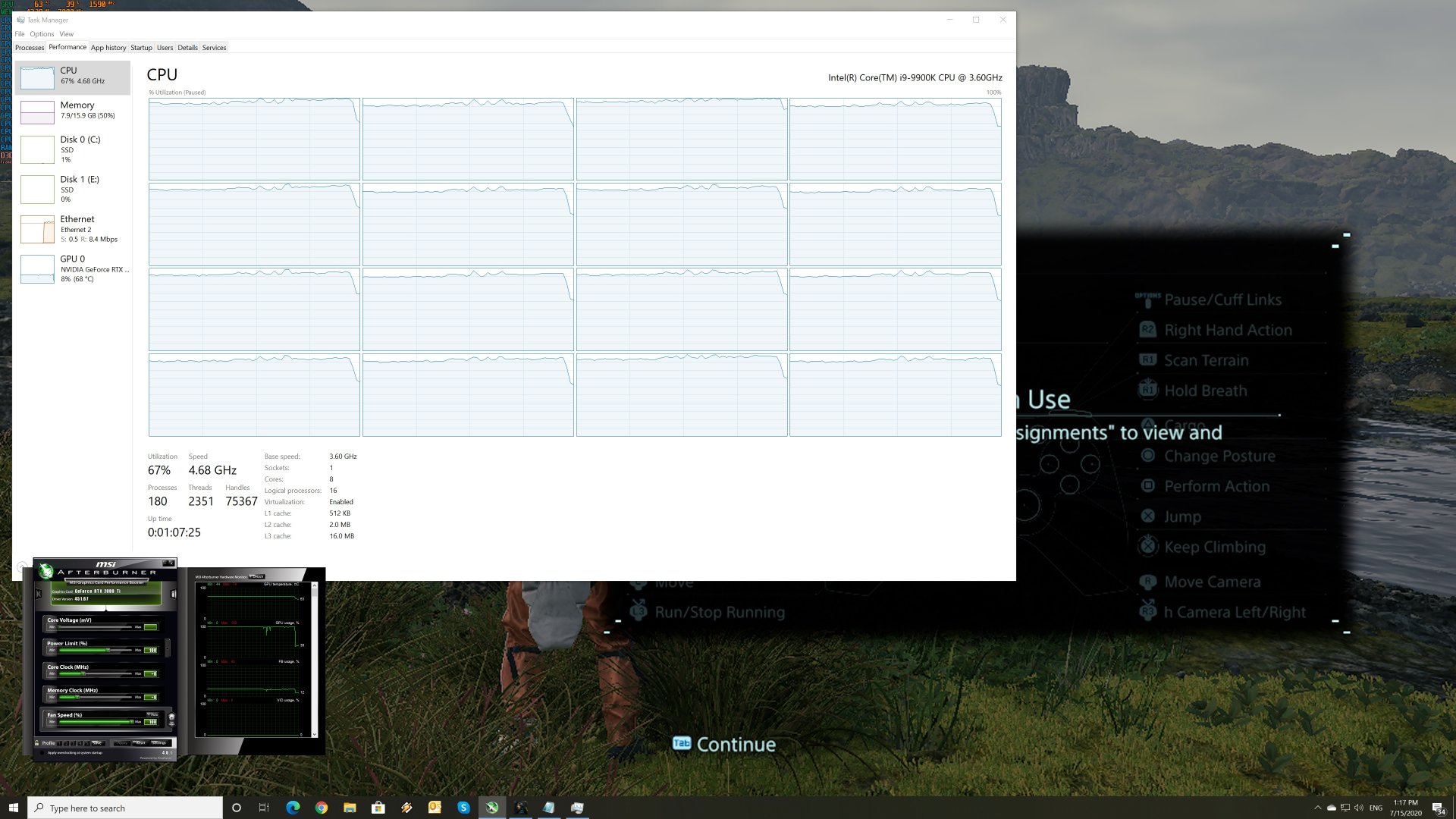 Kojima Productions has added very few graphics settings to tweak. PC gamers can adjust the quality of Models, Memory Streaming and Shadow Resolution. There are also options for Ambient Occlusion, Depth of Field and Motion Blur. And that’s it. Thankfully, the game supports high framerates and ultrawide monitors. Moreover, the game supports both FidelityFX Upscaling and DLSS 2.0. You can find a really detailed article about the visual differences between native 4K, FidelityFX and DLSS here. Lastly, Death Stranding does not feature any FOV slider. 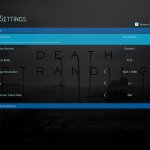 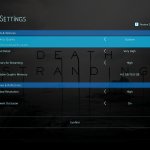 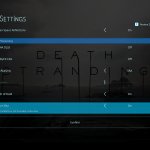 Death Stranding is using the Decima Engine and DX12, and it’s the first triple-A Decima game on the PC. And, surprisingly enough, the game does not require a high-end CPU. In order to find out how the game scales on multiple CPU threads, we simulated a dual-core, a quad-core and a hexa-core CPU. Thus, we are happy to report, that the game can run with 60fps even on a dual-core CPU (provided it supports Hyper Threading). Without Hyper Threading, we had major stuttering issues on our simulated dual-core system that made the game unplayable. However, and with Hyper Threading enabled, our simulated dual-core system was able to push a minimum of 84fps and an average of 91fps at 720p on Max Settings. Let this sink in for a moment. A dual-core CPU can run the game smoother than PS4. 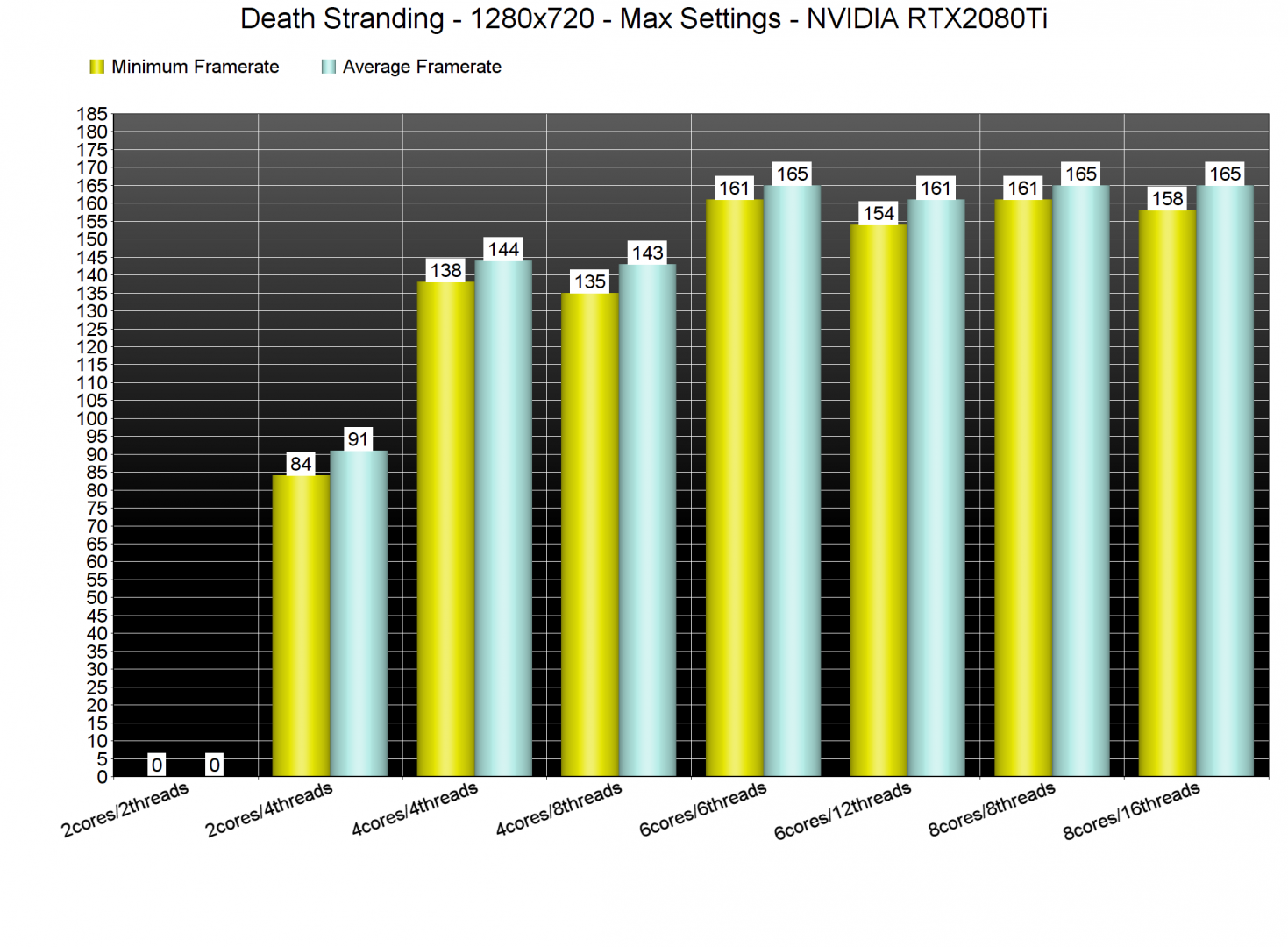 Death Stranding also performs incredibly well on older-generation CPUs. Our Intel i7 4930K had no trouble at all running the game. At 1080p and Max Settings, our Intel i7 4930K ran the game with a minimum of 96fps and an average of 105fps. While we were slightly limited by the CPU at 1080p, our RTX2080Ti was used to its fullest at both 1440p and 4K. 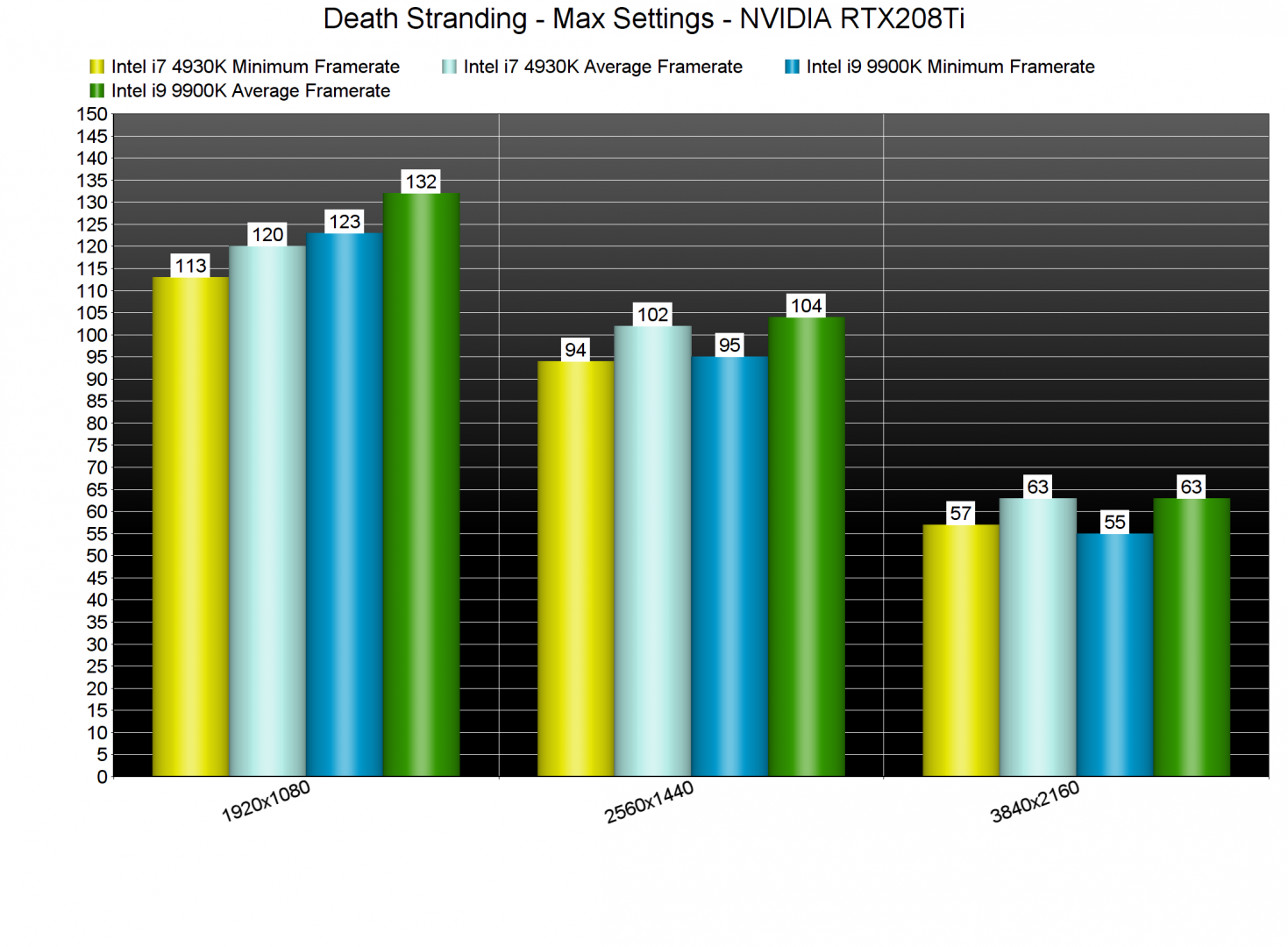 It’s also worth noting that the game does not require a high-end GPU. At 1080p and on Max settings, most of our graphics cards were able to provide a smooth gaming experience. Even our AMD Radeon RX580 was able to push a constant 60fps experience, and that’s without using FidelityFX Upscaling. 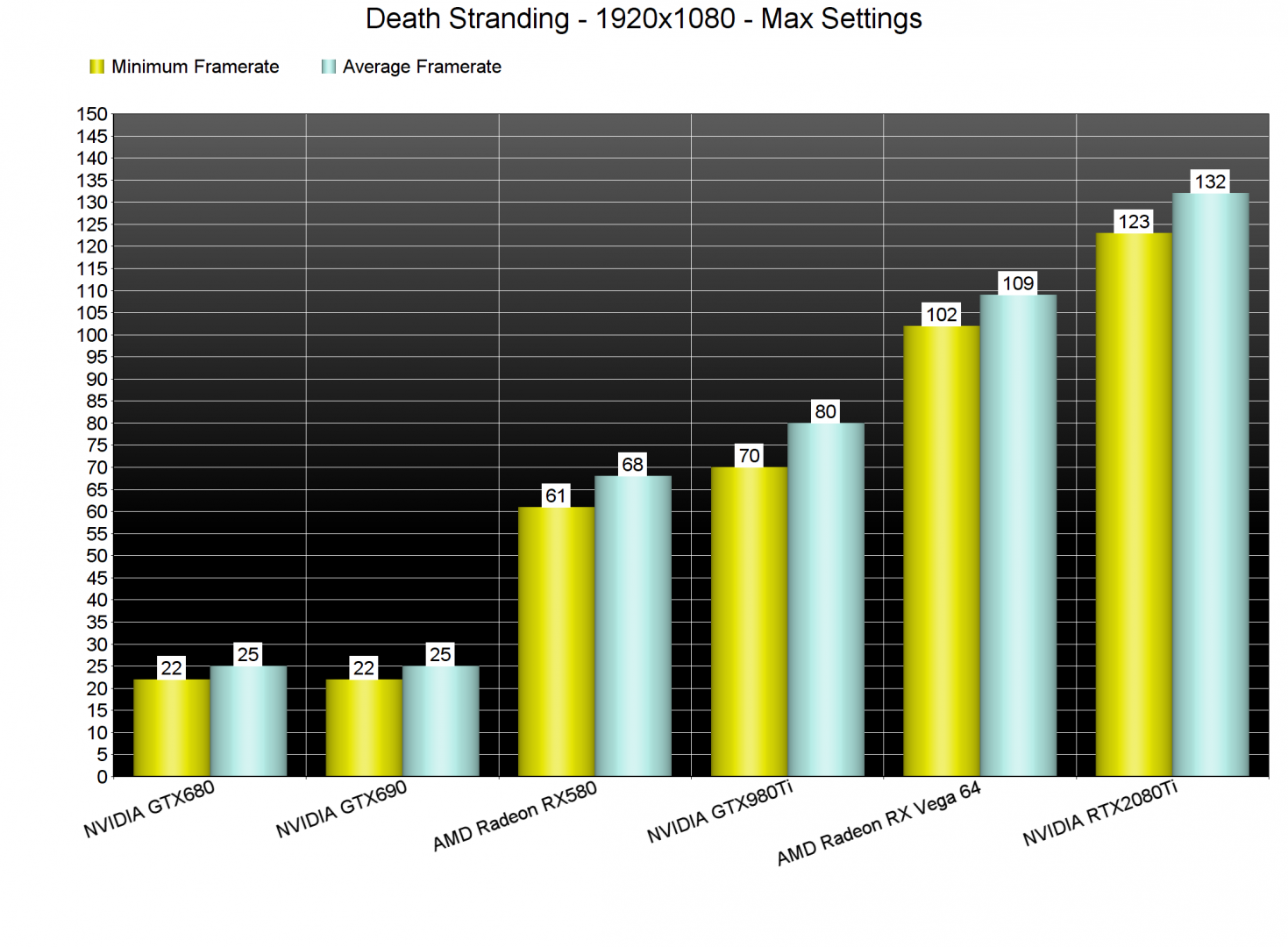 At 1440p, both the AMD Radeon RX Vega 64 and the RTX2080Ti were able to push a smooth gaming experience. As for native 4K, our RTX2080Ti came close to a 60fps experience. NVIDIA’s most powerful GPU was able to offer a minimum of 55fps and an average of 63fps. 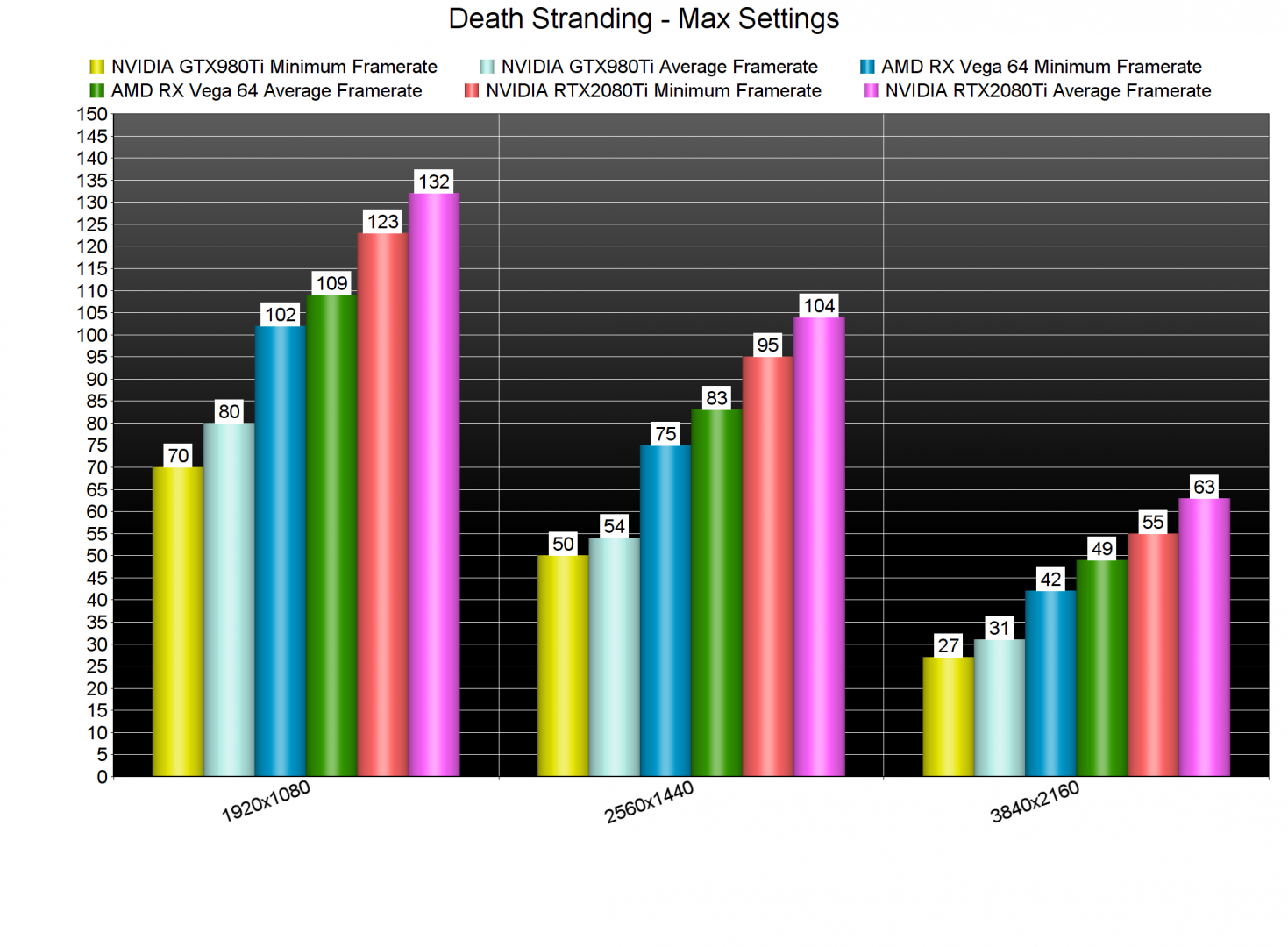 Graphics-wise, Death Stranding looks absolutely gorgeous. The game features some of the best 3D characters we’ve ever seen, and its environments are stunning. Unfortunately, there are some noticeable pop-in issues, even on Max settings. Still, Kojima Productions has crafted the game’s environments in a way that these pop-ins are not that distracting. Additionally, there aren’t any grass shadows, and that’s something that could greatly benefit this game. Nevertheless, despite these shortcomings, Death Stranding is one of the most beautiful games on the PC right now.

All in all, Death Stranding looks and performs incredibly well on the PC platform. The game does not require a high-end CPU or GPU, and can run on a wide range of PC systems. A lot of PC configurations will be able to run the game with 60fps at Max Details. Furthermore, DLSS 2.0 is doing an incredible work at eliminating jaggies, and we highly recommend using it in 4K. We also did not experience any mouse acceleration or smoothing issues, and there are proper K&M on-screen prompts. Not only that, but the game plays wonderfully with the mouse and keyboard, and we did not experience any “control” issues during our first two hours. This is a really solid PC product, so kudos to Kojima Productions. I’m also pretty sure that Death Stranding will be one of the most optimized PC games of 2020.