At this year’s GDC, Stephen McAuley, Technical Lead at Ubisoft Montreal, talked about the challenges of creating the world of Far Cry 4. During his talk, Stephen admitted that Far Cry 4’s cross-generation development had a negative impact on Ubisoft’s decisions. In other words, the game suffered from its cross-generation development, something most of us already – pretty much – assumed.

“Our mandate as a graphics team was to lead on current-gen, keeping the last-gen engine the same as what shipped Far Cry 3. That gave us a lot of constraints as we had to keep the last-gen working, which affected a lot of our decisions throughout the project. By the end of the project, as was probably inevitable, we had to go back to the PS3 and Xbox 360 and polish those up, but it meant that we had a better product than FC3 on all platforms.”

Going into more details, Stephen claimed that the game’s lighting system suffered from such decisions.

Moreover, according to Stephen’s slides, Ubisoft was able to move CPU work to GPU (regarding its indirect lighting solution). This information is crucial, as it shows how CPU-bound older generation games actually were. Both Hitman: Absolution and Shadow Warrior suffered from such ‘console’ optimizations, so it’s good witnessing devs updating their engines for current-gen platforms. 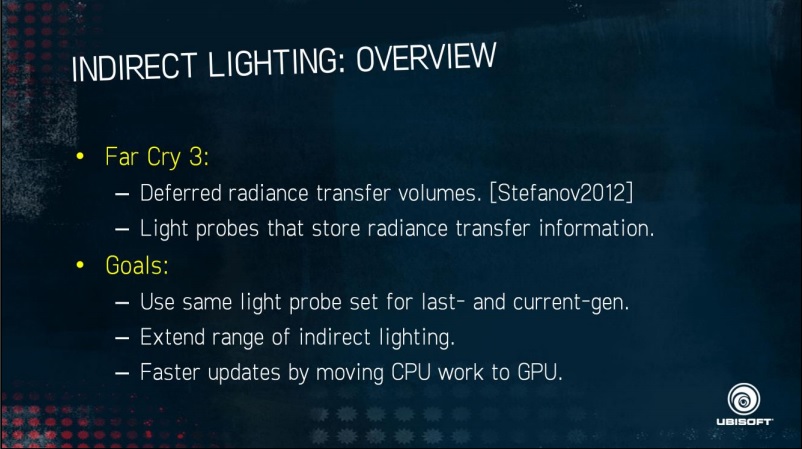