“The additional development time will definitely pay off for our fans. We made a huge progress in terms of performance and stability. Furthermore we will use the time to improve the animations and the cut-scenes.”

In The Dark Eye: Chains of Satinav, players can dive into a brand new fantasy-adventure. In the role of the young trapper Geron from the northern kingdom of Andergast, they get caught up in a sinister conspiracy. The people of Andergast, are considered to be notoriously superstitious, and have been at odds with their neighbors from the kingdom of Nostria for a long time. Now, first steps are taken towards a lasting peace. But this peace as well as the festive mood of the royal quest is disturbed by a mysterious plague of crows. The birds, behaving with unusual aggressiveness, are even attacking humans.

To get rid of this plague, the king seeks a skilled bird catcher – an opportunity for young Geron to prove that the reputation for ill luck that has followed him since childhood is undeserved. Following an audience with the king, the prestigious task is assigned to him.

However, not only does his chore proves unexpectedly difficult, but it also turns out to be the first step into the greatest adventure of his life, which will lead him to the uncharted lands of Aventuria and beyond. Adventure-fans await stunning hand-drawn backgrounds, elaborately animated characters in HD resolution, tricky riddles and a gripping story.

The Dark Eye: Chains of Satinav will be released on June the 22nd, 2012 exclusively on PC. 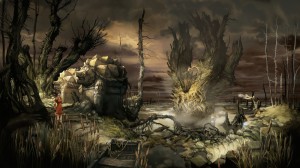 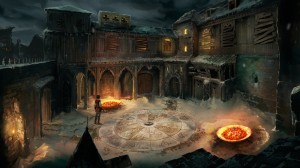