Intel recently confirmed that its 11th gen Rocket Lake-S desktop CPU lineup is launching on the 30th of March, 2021. In response to Hardwareluxx, an Intel spokesperson confirmed the Rocket Lake CPU’s launch schedule.

Through an update to the latest BIOS, MSI Z490 motherboards will offer great bandwidth and performance for PCIe 4.0 M.2 SSDs and graphics cards.

According to MSI, the company says it has designed its Z490 boards specifically to support Gen 4.0 from the get-go by implementing “PCIe 4.0 ready clock generator, lane switch, redriver, PCIe slots, and M.2 connectors.”

You must update your compatible Z490 motherboard with the latest BIOS optimized for PCIe 4.0, in order to enjoy the unlocked performance of PCIe 4.0 interface. 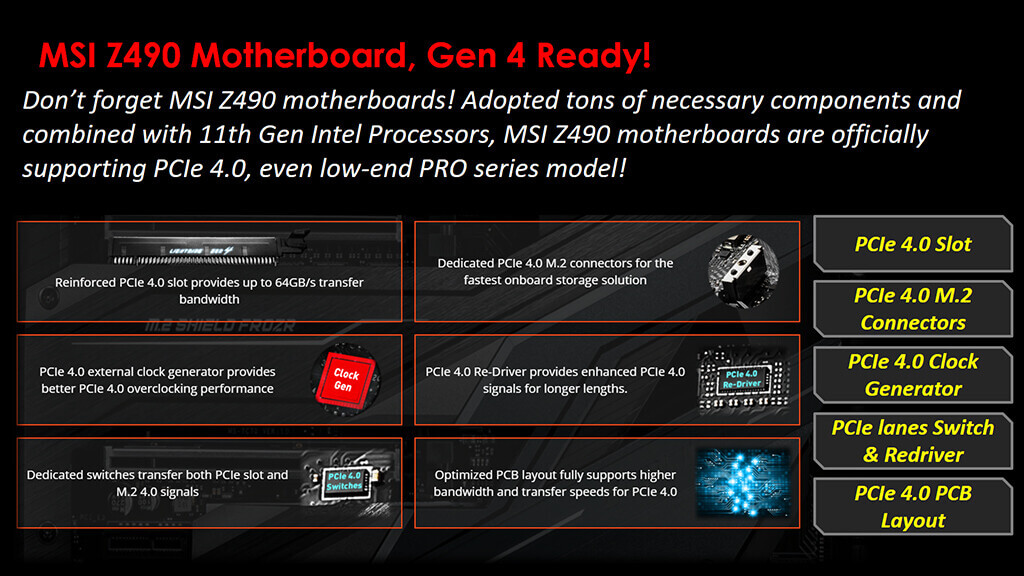 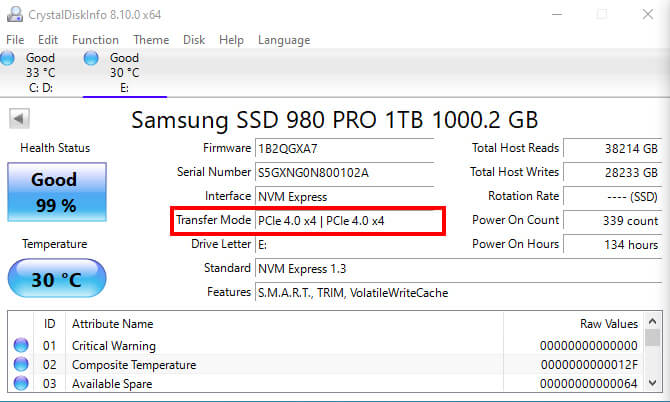 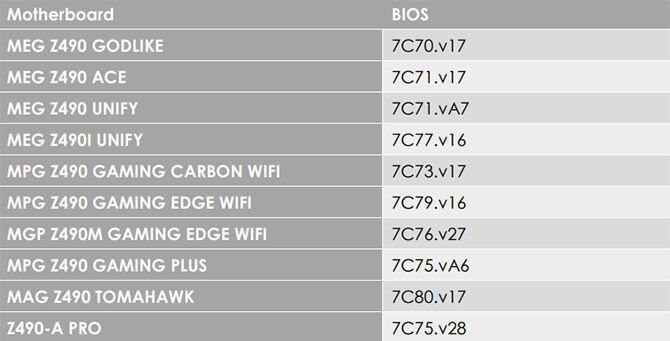 Rocket Lake-S will be housed on the new 500-series motherboards. Although the Rocket Lake-S lineup will be the last to feature the LGA1200 socket, Intel is planning a full range of chipsets, including workstation W580, high-end gaming Z590, H570, and budget-oriented B560 and H510 series.

I have explained this before as well, but to reiterate the main points once again, one author of a Chinese forum and tech website recently posted some interesting findings on Intel’s upcoming 11th generation Rocket Lake-S CPU lineup.

The author has explained in depth as to why Rocket Lake processors won’t be compatible with some of the 400-series motherboard chipsets. Though, you should keep in mind that this may or may not apply to all motherboard vendors/AIBs and their respective 400-series boards, but the technical explanation given by the author warrants some attention, and might turn out true.

In case you didn’t know, Intel recently announced that the company has dropped official support for the Rocket Lake-S CPU lineup on B460 and H410 motherboard series. Intel has specifically stated that “motherboards based on Intel B460 or H410 chipsets are not compatible with upcoming 11th gen Intel core processors.”

The B460 is a mid-tier chipset, and the H410 desktop motherboard chipset is an entry-level offering.

The new report from the said Chinese tech article claims that the upcoming 14nm Rocket Lake chips might not even work on most of the Z490 motherboards as well, citing reasons like lack of chipset and BIOS level support, and how the motherboard’s power delivery subsystem has been designed.

The Z490, W480, Q470 and H470 chipsets all fall under the Comet Lake PCH-H category, while the B460 and H410 chipsets belong to the Comet Lake PCH-V group. So based on this segmentation we can guess why the B460 and H410 motherboard series have been excluded from the Rocket Lake CPU support list, since they fall under the lower tier in the hierarchy.

To explain things in more details, the author of that tech article explains that each CPU has a unique “CPU_ID” that the motherboard chipset utilizes to identify the processor chip. From a logical point of view, the processor will not work if the chipset cannot properly recognize the CPU_ID.

When this happens, there will be a self-test error situation; and the computer will naturally not be able to start normally during the BIOS POST. However, there is a workaround to bypass this, and it simply consists of disabling the CPU_ID in the Intel Management Engine (ME) part of the BIOS.

Following this procedure will eventually turn off chipset verification of the ‘CPU_ID’ in question.

As I have explained in my previous article, some motherboard vendors are now releasing revised H410 and B460 motherboards with the H470 chipset to provide support for Rocket Lake, since Intel made the official announcement that the company is dropping support.

Ironically, Gigabyte has already listed and shipping its H410M DS2V V2 and H410M S2H V2 boards that leverage the H470 chipset, most likely after using this same workaround.

Secondly, the lack of BIOS support is another reason. As we already know BIOS plays a very huge role here as well, when it comes to any processor support. Now, if suppose the CPU’s microcode is not found in the database, then the processor/chip is obviously not going to work on that particular motherboard chipset.

Inside Intel’s BIOS, there’s a thing called CMC (CPU Microcode), which directly determines what CPU your motherboard can use. When Intel developed the Comet Lake PCH-V series of motherboards, the company might have dropped support for the 11th gen Rocket Lake processors while making the BIOS for these chipsets, B460 and H410.

It might be possible that the processors weren’t given any priority, or taken into consideration during the development of the BIOS, by dropping the microcode for these chipsets. 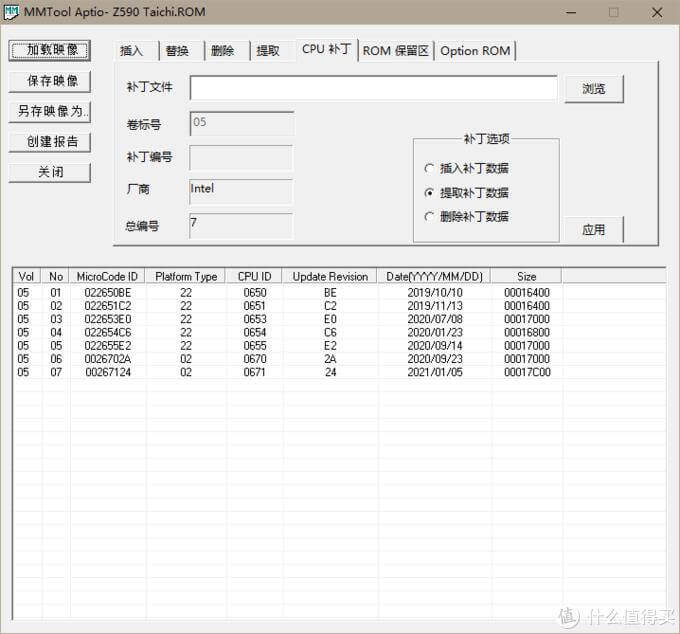 However, as the author explains once again there is a workaround for this.

By extracting the microcode from suppose the Z590 chipset’s BIOS and then copying/implanting it into the target motherboard which requires the microcode, might help overcome this issue. This procedure is not new though, since several motherboard vendors have done this in the past as well.

The third main and an important reason given by the author is the power supply delivery system of the said motherboard. The power delivery subsystem helps in converting the 12V and 5V voltages down to lower voltages that the processor can then use afterwards.

Usually we will compare only the Vcore and Vgt power levels to judge the level of any motherboard. 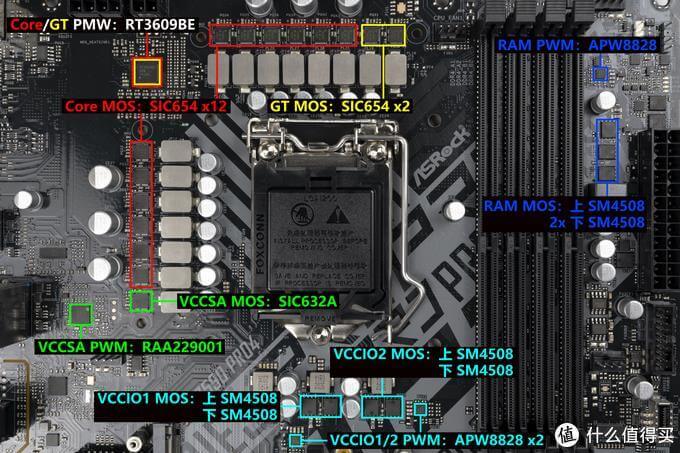 According to the author’s findings, the Intel 10th and 11th generation Comet Lake-S and Rocket Lake-S processors have not changed on the Vcore and Vgt voltage values. However, the VCCSA and VCCIO voltages have changed slightly.

Further in-depth explanation of this whole power delivery system is “highly” technical in nature, so I’m not going into all the details, except for the main points. So unless you are from an electronics background, or have experience with motherboard chipset circuit diagrams, voltages and the like, it would be hard to grasp.

But nonetheless, from the author’s findings it appears that with Rocket Lake-S lineup, Intel has most likely changed the power delivery mode of the VCCSA to SVID, which means that the voltage supplied by this phase is controlled directly by the CPU, just like Vcore, so that there is no common power supply or any other PWM.

So a PWM that supports the IMVP8 specification is required here.

Moreover, some motherboards that lack a SVID PWM controller cannot accommodate these new Rocket Lake-S chips. It is also not possible to share the power delivery or use another PWM. As the tech author mentioned, we need a PWM IC here which fully complies with Intel’s IMVP8 specifications.

When it comes to VCCIO, he has provided two circuit diagrams of the B460 and Z590 motherboards. From his observation the author notes that VCCIO for Rocket Lake-S is divided into three parts: VCCIO_0, VCCIO_1_2.

The B460 motherboard is not connected to the VCCIO_1_2 part, as shown in the diagram below. This actually means that RSVD pins on the B460 and H410 motherboards are empty. Due to this there is no power going to VCCIO_1_2, which feeds the PCIe interface.

The CPU has no power input in this section, and since VCCIO_1_2 governs data buses such as PCIe, so the CPU cannot exchange data with the surroundings and the computer will not work naturally. That sums it all.

It remains to be seen how Intel’s Rocket Lake CPU lineup will stack up against AMD’s Ryzen 5000 series. 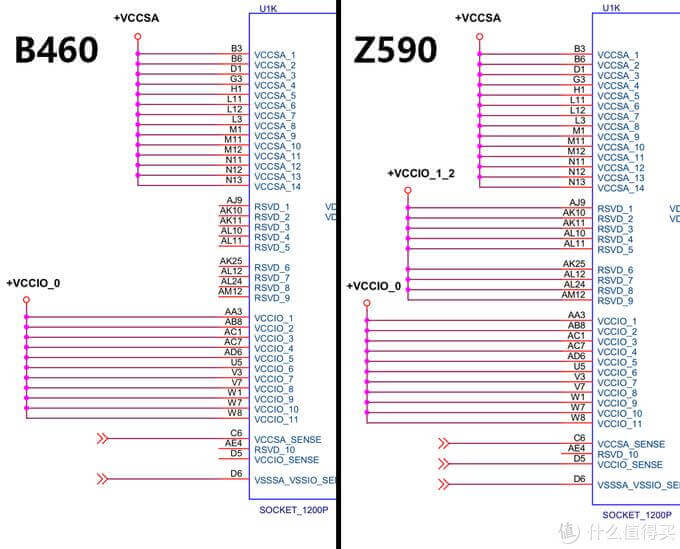