In a rather unexpected move, Intel has just announced and confirmed that the previous generation B460 and H410 motherboards will not support the company’s upcoming 11th gen Rocket Lake-S CPU lineup. Previous rumors have hinted at some sort of “backwards compatibility” with these chipsets, however, that doesn’t seem to be the case now.

Intel has specifically stated that “Motherboards based on Intel B460 or H410 chipsets are not compatible with upcoming 11th Gen Intel Core processors.” The B460 is a mid-tier chipset, and the H410 desktop motherboard chipset is an entry-level offering.

The BIOS update support page on the company’s website confirms that Intel B460 or H410 chipsets have been excluded from the support list. So those who want to use the new Rocket Lake processor might be forced to upgrade to either the B560 or the H510 motherboard chipset, or even the high-end gaming Z590, H570 chipset series, assuming they can afford these models.

However, H510 is not really a very huge upgrade over the current H410 chipset, and moreover the H410 chipset series basically also lack premium CPU VRM capabilities. The B460 chipset on the other hand has been released by several vendors, sporting a premium VRM solution for the CPU as well, such as the ASUS ROG B460-F Gaming, and the Gigabyte B460 AORUS Elite model. 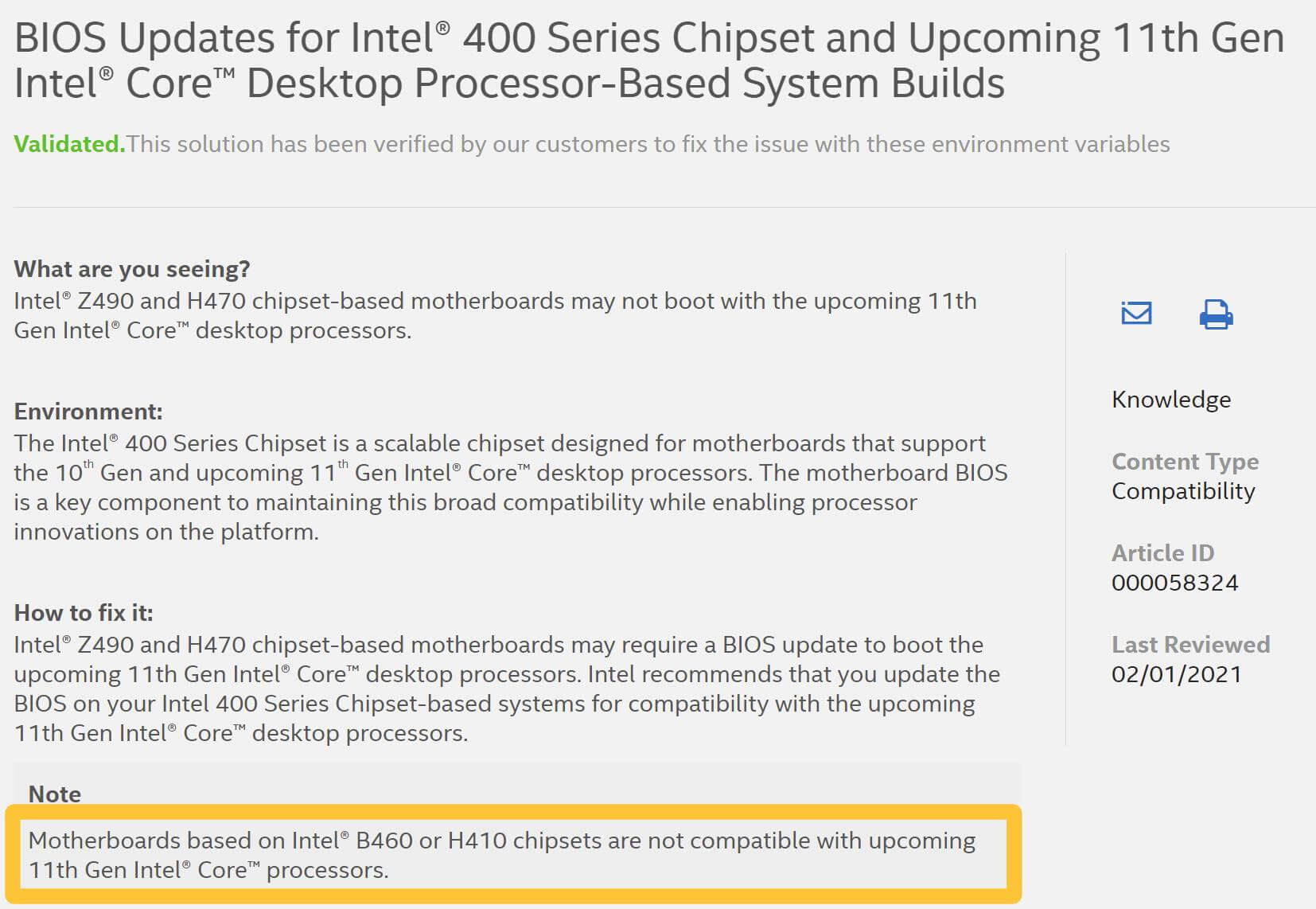 The H410 and B460 chipsets are actually based on a different and older 22nm process node, which made them seem incompatible with the upcoming Rocket Lake-S CPU lineup. Though surprisingly, some motherboard vendors have just now started adding support for Rocket Lake on the H410, B460 series of motherboards.

As reported by Tom’s Hardware, some motherboard vendors are now releasing revised H410 and B460 motherboards with the H470 chipset to provide support for Rocket Lake, since Intel made this official announcement.

Ironically, Gigabyte has already listed the H410M DS2V V2 and H410M S2H V2 that leverage the H470 chipset. The company will although continue to market these SKUs as H410 and B460. Though, the specs page is still listing support for only the 10th generation CPU lineup.  So I’m not fully sure whether we can take this leak as a confirmation of some sort.

But nevertheless, this is the product’s SKU code. It does say, “Intel H470 Chipset”.

With the Rocket Lake CPU lineup, Intel claims to take the gaming performance crown, with the company claiming that their 8-core Rocket Lake i7 can outperform an AMD Ryzen 12-core in Metro Exodus with an Nvidia RTX 3080 GPU. Intel demoed the Rocket Lake-S Core i7 8-core CPU against AMD Ryzen 7 12-core CPU.

The new Rocket Lake Intel CPU was able to beat the AMD Ryzen processor In Metro Exodus. However, we don’t know whether the system had Resizable BAR option enabled or not. The Intel CPU scored 162 FPS, and the AMD processor scored 159 FPS on the test system. However, such internal company tests/leaked slides should not be taken very seriously, and they are bound to be biased as well.

Intel has confirmed that the 11th Gen Core series features 20 PCIe 4.0 lanes off the CPU, which are 4 lanes more than the current 10th gen Comet Lake-S lineup.

Rocket Lake will use a 14nm ‘back-port’ of the 10nm Sunny Cove cores found in the Ice Lake processors. Also, the RKL CPU lineup will max out at 8 cores/16 threads. According to Intel, Rocket Lake-S will have a PL1 state value of 125 W and a PL2 of 250 W.

Although the Rocket Lake-S lineup will be the last to feature the LGA1200 socket/Z490 chipset, Intel is planning a full range of chipsets, including workstation W580, high-end gaming Z590, H570, and budget-oriented B560 and H510 series.

John Bonini (VP and GM of Client Computing Group Desktop, Workstation, and Gaming at Intel) has also confirmed that the 11th Gen Core series processors codenamed Rocket Lake will be Intel’s first lineup to support the PCI-Express gen 4.0 interface, a feature which has been seemingly missing in Intel’s client desktop CPU platform for quite some time.