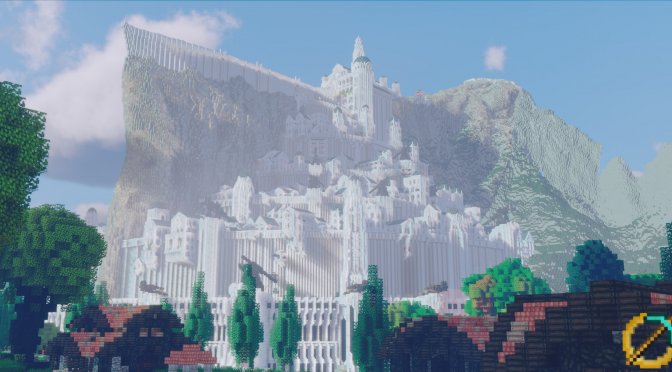 NVIDIA has shared a new video, showcasing Minas Tirith from The Lord of the Rings in Minecraft RTX. This recreation of Minas Tirith is part of the Minecraft Middle-Earth project; a project that aims to remake the entire Middle-earth in Minecraft.

In Minecraft Middle-Earth, you start as an Adventurer in Bilbo and Frodo Baggins’ home of Bag End. Players will delve into the depths of Moria, traverse the tower of Isengard, and check out the citadel of Minas Tirith. Players can also participate by building in a job where you are supervised by a Foreman, or you can practise your building on a theme plot, using /theme.

This map is 29,000 by 30,000 blocks and it was created in WorldPainter and WorldMachine. According to the team, this makes an area of 870 square kilometers. To put things into perspective, that’s the same size of Dallas or Fort Worth in Texas.

Naturally, this video also showcases the Ray Tracing effects of Minecraft RTX. So yeah, you’ll be able to experience LOTR in all of its Ray Tracing glory in Minecraft.

You can join the server for Minecraft Middle-Earth by visiting its official website. And speaking of Minecraft, you should also check out the Mass Effect Mash-up Pack for it. There is also a really cool Harry Potter RPG that you can download. Additionally, you can find a Kingdom Come Deliverance Demake, as well as Brutal Minecraft Beta 2.0 (a project inspired by Brutal Doom).