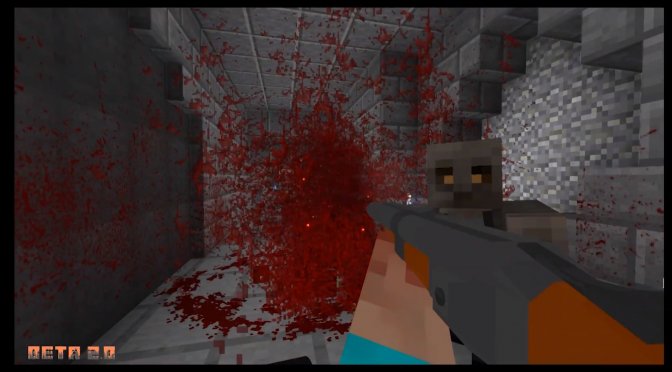 Modder ‘DooMFOREVER7z’ has released a new beta version of his Brutal Minecraft total conversion mod for Doom/GZDoom. This TC brings the world, aesthetics, weapons and monsters from Minecraft to Doom. Basically, it transforms Minecraft into a Doom clone, and it looks bloody amazing.

Brutal Minecraft Beta 2.0 supports both single-player and co-op modes, and features more than 25 weapons. This mod also packs 3D environments, objects and enemies from Minecraft. Players can use their arsenal in order to kill zombies in a lot of gory ways.

The game currently features 9 maps. Therefore, players will be able to kill the Minecraft monsters in House, Abandoned fortress, Cave, Crypt, City, Mansion, Hell dungeon, Bridge of souls, the Main Portal, and the Infected city. Players will also have the ability to move freely between them.

It’s worth noting that this total conversion mod features 825 different zombie sprites. Do note, however, that the only difference between these zombies is their texture. In other words, we’re talking about 825 variations of the same enemy. Still, the game does feature a respectable amount of different monsters (so yeah, you won’t be shooting zombies all the time).

In a future version, the modder aims to finalize the dismember system, add more monsters, campaigns, and weapons, and introduce an inventory system.

Brutal Minecraft sure looks and sounds great, so be sure to download it from here.