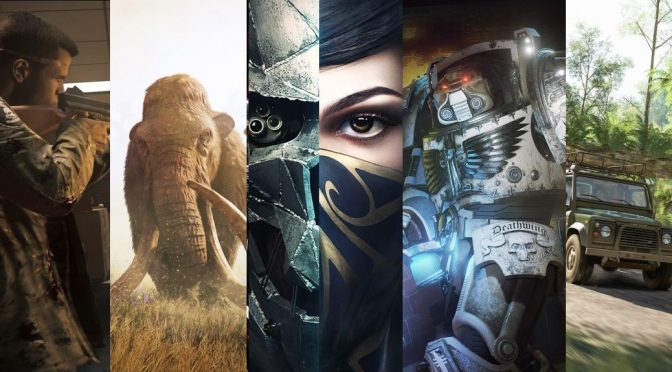 We’ve already shared our list of our top 10 most optimized PC games of 2016, however we thought it would be cool to also share a list with the most unoptimized PC games of 2016. As always, we judge games based on their PC performance optimizations. As such, the games that are listed are not necessary bad games; they simply perform poorly on the PC platform.

In order to pick this list, we ran all games that were released in 2016 and had various performance issues. Some titles, like Need for Speed, Homefront: The Revolution and Gears of War: Ultimate Edition, saw minor improvements via post-release patches, which is why they are not included on this list.

The good news here is that we could not pick 10 games that were/are unoptimized for the PC platform. Not only that, but both Far Cry: Primal and Space Hulk: Deathwing could had easily avoided their inclusion on this list. Ubisoft simply dropped the ball, while Streum On Studio could had delayed the game in order to address its performance issues (that appear to be due to the increased number of draw calls when lots of enemies appear on screen, which is why we’re almost certain that a proper DX12/Vulkan patch would do the trick).

Now we know that some of you will be wondering why Quantum Break is not included on this list. And the reason is simple; Quantum Break looks absolutely phenomenal. Its lighting system and global illumination solution are perhaps the best we’ve seen in 2016. Yes, Quantum Break is a really demanding title, however it’s also one of the most beautiful games of 2016.

So without further ado, here are the five most unoptimized PC games of 2016… at least in our humble opinion.

Once upon at time, the Dunia Engine was among the most ambitious engines out there. Fast forward a couple of years and here we are today with an engine that suffers from major single-thread CPU issues. As a result of that, Far Cry: Primal under-performs in a variety of PC systems. The game also suffered from some awful from mouse deadzone issues, however Ubisoft resolved them via a post-release patch. Here is hoping that Ubisoft will enhance the Dunia Engine 2 so it can compete with Frostbite 3, id Tech 6, Unreal Engine 4 and CRYENGINE.

“Overall, Far Cry: Primal has its issues. While the game looks gorgeous, it suffers from mouse deadzone issues (that will be hopefully fixed) and single-core CPU issues (that won’t be fixed as these issues are due to how the Dunia Engine 2 currently works). To its credit, the game is properly optimized for GPUs with 2GB of VRAM and does not suffer from the stuttering issues that plagued its predecessor. Still, Ubisoft will have to upgrade the Dunia Engine 2 so it can take advantage of multiple CPU cores (or ditch it in favour of the Snowdrop Engine).”

Space Hulk: Deathwing disappointed a lot of PC gamers. While Streum On Studio nailed the Warhammer 40K art style and offered some truly atmospheric environments, the game suffered from major performance issues, especially when there were a lot of enemies on screen. Space Hulk: Deathing is perhaps the only Unreal Engine 4-powered title that performs so poorly on the PC, and that’s a real shame. Whether a DX12 (or a Vulkan) patch will resolve the game’s performance issues remains to be seen.

“All in all, Forza Horizon 3 is the most beautiful open-world racing game that suffers from ridiculous single-core CPU issues. The game also suffers from really annoying stutters (worse than those witnessed in Forza Motorsport 6: APEX). We don’t know whether the single-core CPU issues or the game’s encrypted files are to be blamed here. Bottom line is that the game suffers from major performance issues on the PC. In order to overcome the game’s CPU issues, PC gamers will have to either use the latest Intel CPUs (that offer better performance per core) or overclock their CPUs.”

Ah Mafia III, a game that a lot of PC gamers were looking forward to. Unfortunately, Mafia III requires a really high-end system in order to be enjoyed with visuals and environments that do not justify these ridiculously high PC requirements. Mafia III is a blurry mess, looks underwhelming, its lighting system is so old-gen-ish, features a city that does not appear more alive than GTA V’s Lost Santos or Watch_Dogs 2’s San Francisco, and runs worse than both of these open-world titles.

“All in all, Mafia 3 is a huge letdown. While the game performs and looks better on the PC than its console brother, it’s nowhere up to what we’ve expected. Furthermore, the game comes with some ridiculously high and unjustifiable PC requirements (regarding 60fps). Mafia 3 already looks dated, ugly and so blurry, and that’s a real shame!”

It saddens us to say this, but Dishonored 2 is the most unoptimized PC game of 2016. This can be easily described as the “Batman: Arkham Knight” of 2016. Dishonored 2 had frame pacing and mouse movement issues (that have been slightly fixed thanks two some post-release patches), has major performance issues, and its visuals do not justify the game’s ridiculously high PC requirements. The first Dishonored was powered by Unreal Engine 3 and performed amazingly well on the PC platform. For its sequel, Arkane Studios decided to switch to id Tech 5, and that choice simply did not pay off.

“All in all, Dishonored 2 is a mess on the PC, even though it runs better than its console cousin. Yes, the PC version – provided you have the hardware – runs better than the console version. Still, the game suffers from major optimization and frame pacing issues. Not only that, but the game suffers from aliasing issues that can not be fixed unless you are fans of blurry visuals (SweetFX/Reshade will be handy in this title, no doubt about that). And that’s sad because there is a really interesting game underneath this – tech – mess!”