The initial PC version of Dishonored 2 disappointed a lot of PC gamers as it suffered from major performance issues. Arkane Studios has released two beta patches for its title, so it’s time now to see how Dishonored 2 performs on the PC platform.

For this PC Performance Analysis, we used an Intel i7 4930K (turbo boosted at 4.2Ghz) with 8GB RAM, NVIDIA’s GTX980Ti, Windows 10 64-bit and the latest WHQL version of the GeForce drivers. The reason we decided to only use our GTX980Ti is simple; Dishonored 2 does not run very well, despite receiving two performance beta patches, even on that GPU.

Unfortunately, Dishonored 2 still suffers from PC optimization issues. Our GTX980Ti was unable to offer a constant 60fps experience at 1080p on Ultra settings. In order to get a locked 60fps experience, we had to lower our settings to High. However, the game’s visuals do not justify these ridiculously high GPU requirements. Below you can find two comparisons between the game’s Ultra (left) and High (right) settings (anti-aliasing was disabled).

Dishonored 2 is also one of the few titles that suffers from A LOT of aliasing. And when we say A LOT we mean… A LOOOOOT. The bad news here is that Arkane Studios has only included FXAA and TXAA for its anti-aliasing solutions. And to be honest, both of them blur the whole image to a ridiculous degree (even with TXAA sharpening set at its highest setting). As such, you will either have to downsample the game from a higher resolution, or put up with blurry visuals. Below you can find a comparison between noAA (left), FXAA High (middle) and TXAA (right). 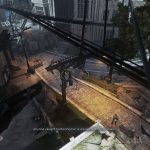 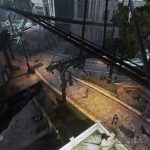 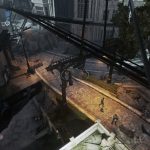 Dishonored 2 does not only require a high-end GPU, but also a high-end CPU. The game is powered by the VOID Engine; an engine that appears to be taking advantage of more than four CPU cores/threads. 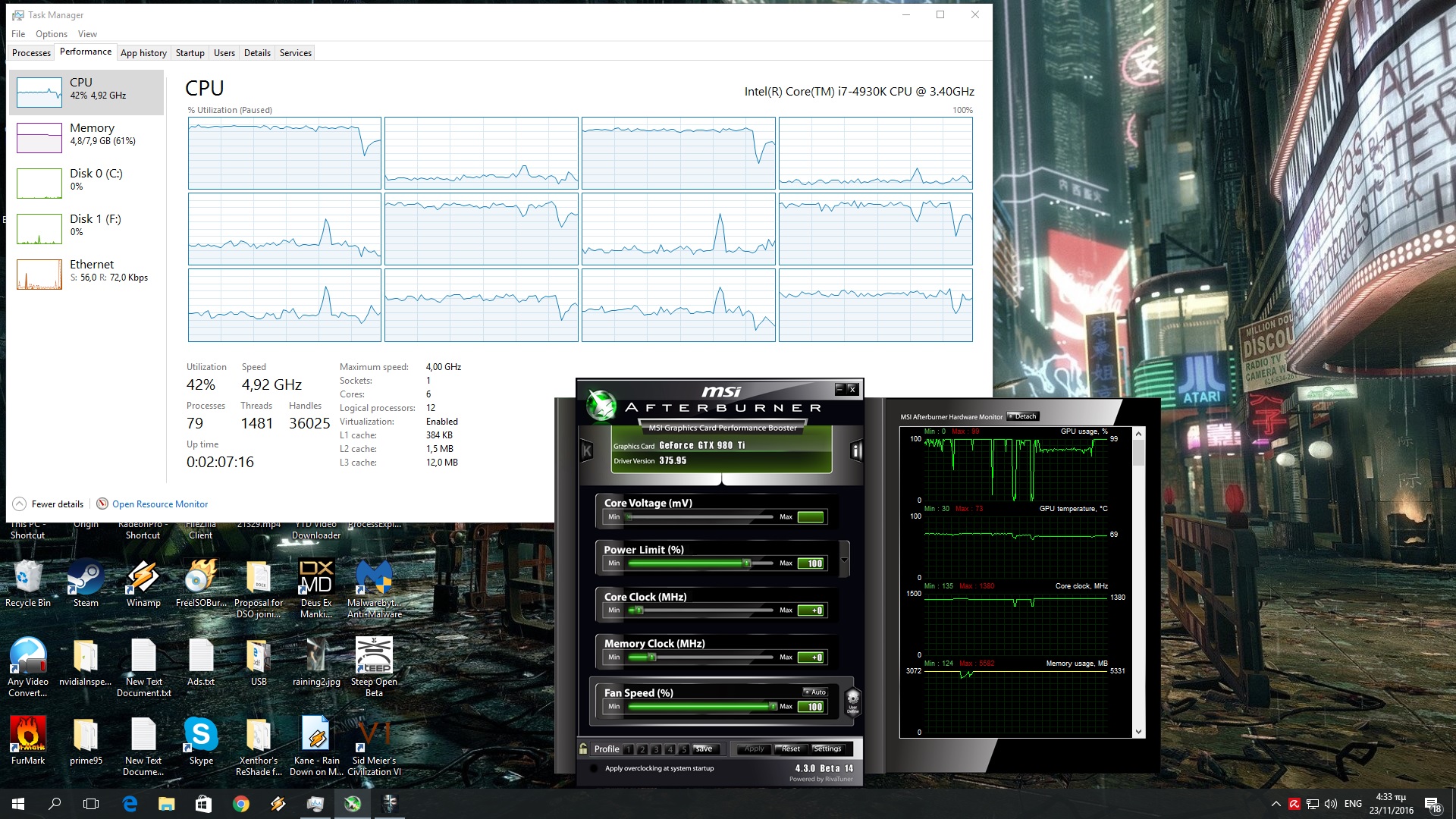 In order to find out how the game performs on less powerful CPUs, we simulated a dual-core and a quad-core CPU. And our findings were quite interesting. Do note that we tested a really demanding scene in Karnaca, meaning that this is among the worst case scenarios (though it will give you an idea of the game’s overall CPU scaling). During this CPU test, we also lowered our resolution to 720p in order to avoid any possible GPU limitation. 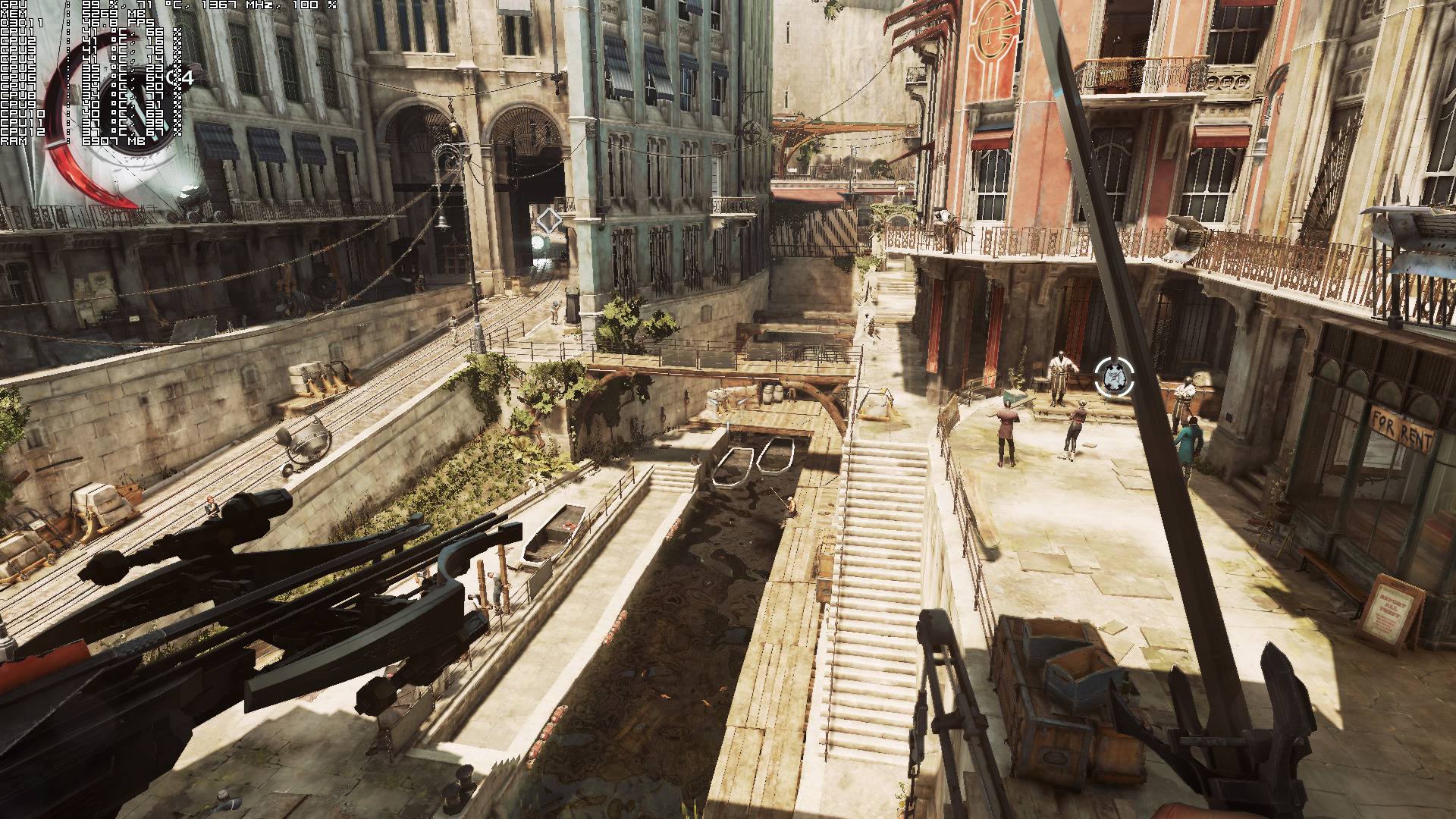 With Hyper Threading disabled, our simulated dual-core system was simply enable to offer an acceptable experience (as there were a lot of stutters). Our simulated quad-core was able to push 66fps, while our hexa-core system ran that scene with 81fps

With Hyper Threading enabled, our simulated dual-core system was able to push 46fps (with minor stutters). This clearly means that a modern-day dual-core CPU is unable to handle this latest title, something that falls in line with the game’s official PC requirements (Bethesda suggests at least an Intel i5 CPU). Our simulated quad-core and our hexa-core systems did not benefit from Hyper Threading, and ran that scene with 66fps and 81fps, respectively.

What’s also interesting here is that Bethesda recommends 16GB of RAM, when in fact the game was using around 1.5-2GB of RAM. As such, 8GB of RAM are plenty enough for Dishonored 2, despite the official requirements claiming otherwise.

Graphics wise, Dishonored 2 can look great in 4K (as you can see in our 4K gallery). However, and as we’ve already said, the game suffers from major aliasing issues on lower resolutions. Arkane Studios went for a watercolor effect that looks awful when FXAA or TXAA are applied to it. Not only that, but the game is full of jaggies in 1080p (when there is no AA at all). And to be honest, Dishonored 2 is a game for which we’d prefer 4K/30fps instead of 1080p/60fps. Yeap, the aliasing is THAT BAD in 1080p that we are more than willing to sacrifice the smoothness of the 60fps experience. 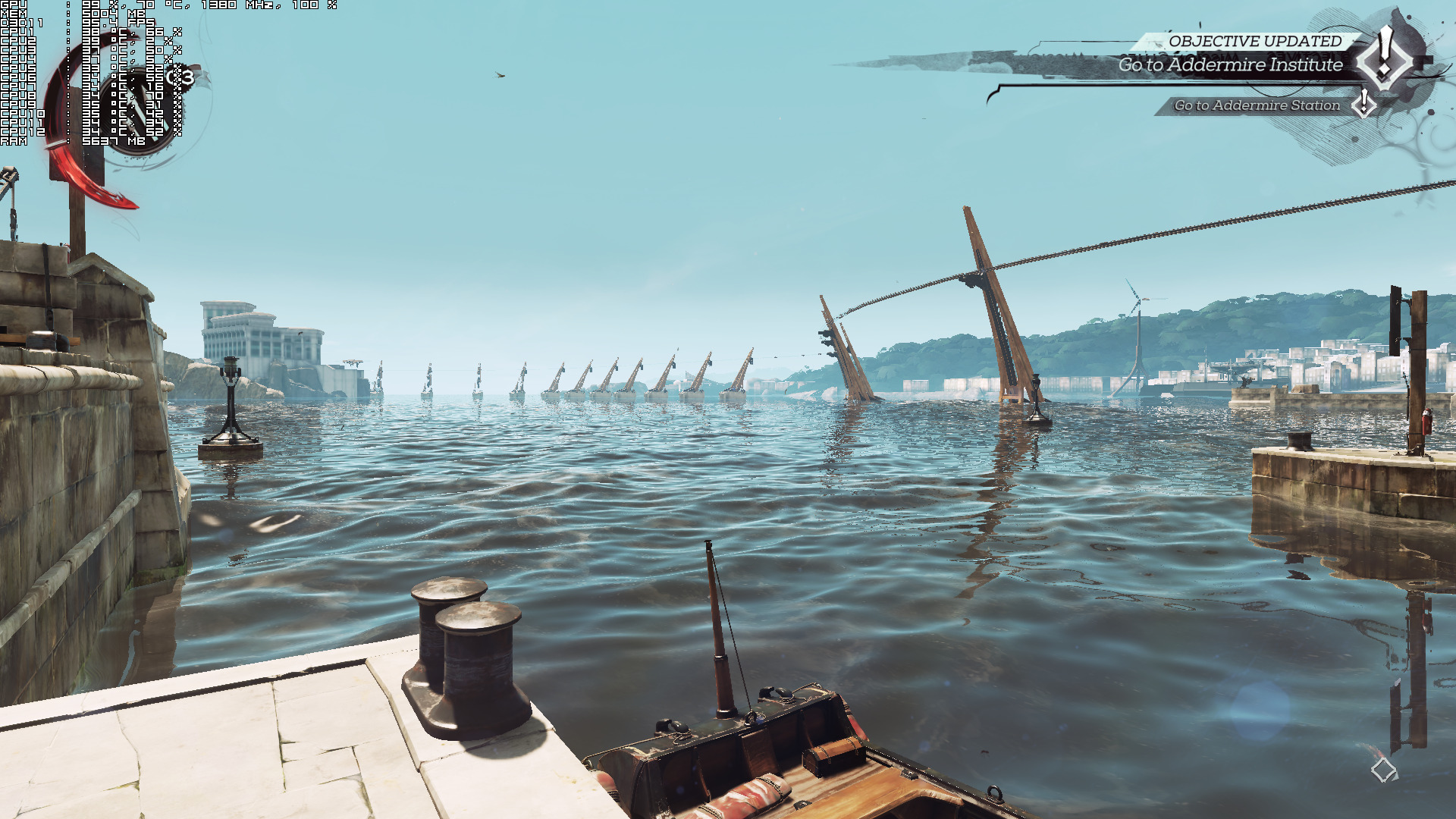 It’s also worth noting that the game still suffers from noticeable frame pacing issues. While the framerate did not drop below 60fps (on High settings), the game felt jerky. It was not as smooth as other titles running with 60fps. Thankfully, Arkane Studios fixed most of the mouse issues that plagued the game’s initial release, however it’s obvious that the PC version still needs a lot of work.

Arkane Studios has provided a nice amount of PC graphics settings to tweak. The game features a FOV slider, an Adaptive Resolution option, as well as an FPS Limiter (that goes up to 120fps). 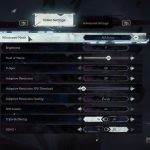 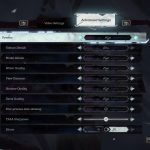 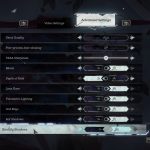 All in all, Dishonored 2 is a mess on the PC, even though it runs better than its console cousin. Yes, the PC version – provided you have the hardware – runs better than the console version. Still, the game suffers from major optimization and frame pacing issues. Not only that, but the game suffers from aliasing issues that can not be fixed unless you are fans of blurry visuals (SweetFX/Reshade will be handy in this title, no doubt about that). And that’s sad because there is a really interesting game underneath this – tech – mess! 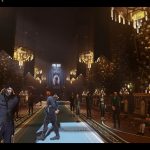 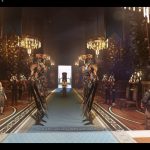 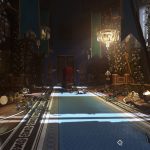 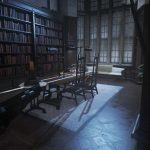 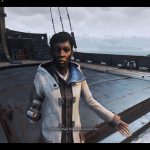 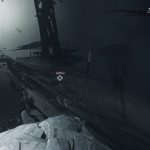 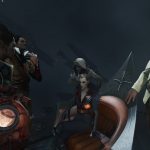 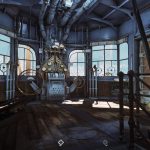 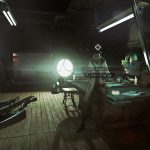 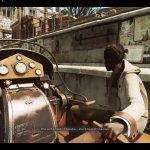 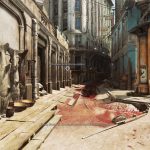 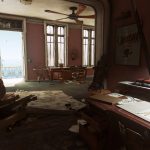 Bethesda has provided us with a review code for this game