Remember when developers were creating their games with all of its content? Well, it seems that those days are long gone. Every game is now built with DLCs in mind and Battlefield 3 was no different. According to Inge Jøran Holberg, Operations team Producer Björn Johnsson approached some of DICE’s designers and asked them if they had any ideas for “Xpack 3”, the third expansion pack for Battlefield 3 that would follow up the infantry focused Close Quarters. In other words, Electronic Arts had already deployed its DLC plans for BF3 right when the game got released in October 2011.

Holberg has also revealed some new information about the biggest Battlefield map that will be featured in the upcoming Armored Kill DLC of Battlefield 3. According to Holdberg, Bandar Desert is stretching as far as 1,900 meters from U.S. to Russian deployment, not counting the airstrip at the very end of the ground forces combat area. This is even longer than Fushe Pass from Battlefield 2. To put it simple – this is the biggest BF map ever.

In Bandar Desert, supporting 64 players and jets, everything would have to be larger and build much more on vehicle gameplay on a grand scale than Atacama Desert. At the same time it should be scalable for consoles with fewer players without it leading to compromises for the 64 player version. It will be interesting to see whether DICE will be able to offer something like that. As you may have guessed though, playing the PC version with 63 other players will be the best way to enjoy this new map.

DICE has also revealed the first screenshots of the Bandar Desert map that can be viewed below. Enjoy! 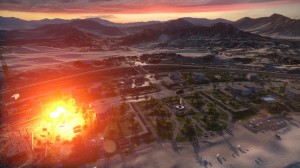 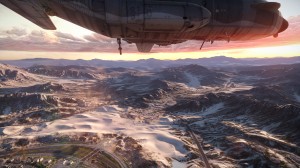