As you may already know AMD recently announced its Ryzen 5000-series Zen 3-based Vermeer desktop CPU lineup. According to AMD these CPUs will offer much better single-thread performance in PC games. AMD also lifted the review embargo and some third-party gaming benchmarks were also published.

However, as you may have guessed the launch was again plagued by supply/stock issues, and the demand for these Zen 3 5000-series CPUs was much higher than expected. This was despite the company shipping tons of units in the first place. The CPUs were sold out immediately at major retail and e-tailer shops globally.

AMD has responded on social media and the company insists that this was not a paper launch, and the demand was too high to begin with. The company ‘shipped tons’ of processors, but they were quickly sold out. AMD’s Frank Azor responded on Twitter with a comment stating that the Ryzen 5000 release was not just another paper launch, as others are claiming.

There's a big difference between a "paper launch" and shipping tons of units but demand exceeds supply.

According to Frank Azor, there is a big difference between delivering tons of units of AMD’s products to consumers, and an actual paper launch. Frank emphasized that AMD already supplied enormous quantities to retailers and dealers, but this time the demand was far much greater than the supply.

Frank Azor is AMD’s chief architect of gaming solutions and marketing. In a previous old tweet, another user made a $10 bet claiming that AMD’s product launch is going to be another ‘paper launch’, similar to what Nvidia’s RTX 3080 GPU suffered at launch day. This prompted a response from Frank Azor.

Nvidia also recently launched their RTX 3000-series Ampere lineup of GPUs, but the launch was plagued with stock availability issues since day one. Many were hoping to purchase these cards, but the custom RTX 3080 stocks were sold out immediately within few minutes at several retailers across the US, UK and Europe.

Some Major e-tailers also experienced extremely high wave of traffic, and this brought their entire website down as well.

Guru3D recently received an email from a user in the UK, who ordered an AMD Ryzen 5950X processor, and he currently sits at number 290 in the waiting queue to get his delivery from scan.co.uk. The email transcript can be seen below. 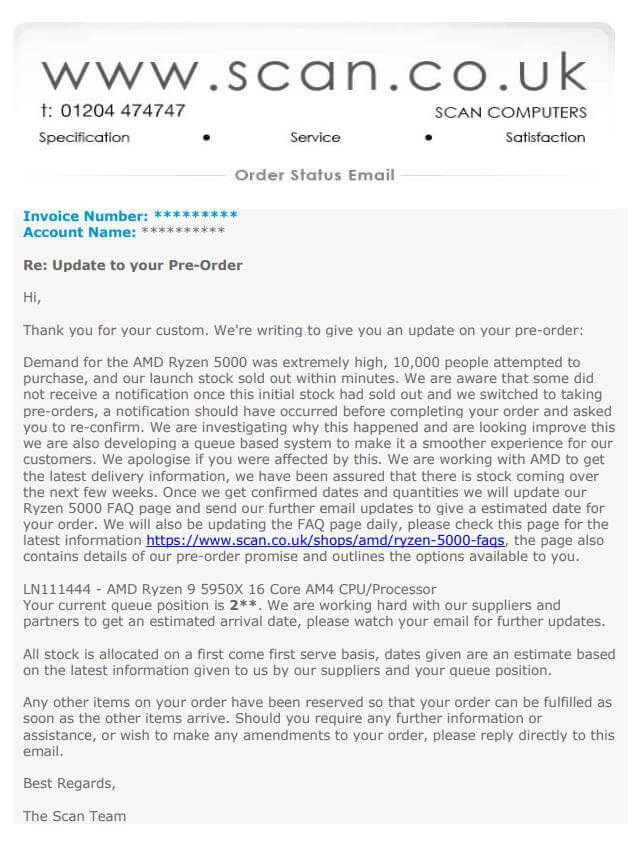 Regarding the scalper BOT protection, AMD said they did everything to circumvent the scalping of Ryzen processors, and they got some success as well, however there are still precautionary measures to be taken. Currently retailers everywhere are experiencing shortages of the new Zen 3 Ryzen 5000-series CPUs.

Despite AMD’s initiative, the scalper bots managed to grab the Ryzen 5000 Desktop CPUs which have now been listed at eBay with inflated prices.

The AMD Radeon RX 6900 XT flagship card on the other hand will be available on December 8th and will cost around $999 USD. Here is hoping that the demand and supply issue isn’t that aggressive as the Ampere launch.