As you already know AMD plans to showcase its Radeon RX 6000 NAVI GPU lineup on October 28th, based on the new RDNA 2 architecture.

Many were hoping to purchase these cards, but the custom RTX 3080 stocks were sold out immediately within few minutes at several retailers across the US, UK and Europe. Some Major e-tailers also experienced extremely high wave of traffic, and this brought their entire website down as well.

Now AMD plans to implement some security measures and guidelines to combat people buying cards using scalper bots, and they also plan to implement the CAPTCHA system. The official AMD partner document issued can be seen in RedGamingTech’s Video as shown below.

AMD expects huge demand for its next-gen RDNA 2 GPUs, and has outlined some measures to partners/retailers to prevent scalper bots from obtaining these cards on launch day.

The same guidelines also apply to the AMD Ryzen 5000-series Zen 3 processors as well, which are releasing on November 5th.

RDNA 2 GPUs are expected to be fabbed on an optimized 7nm process node, and they will support hardware-level ray tracing as well, and are expected to deliver a 50% increase in performance per watt over previous-gen RDNA arch.

Along with an improved performance-per-clock (IPC), and logic enhancement that helps reduce the design complexity and switching power. The GPU clock speeds are also going to get a boost. 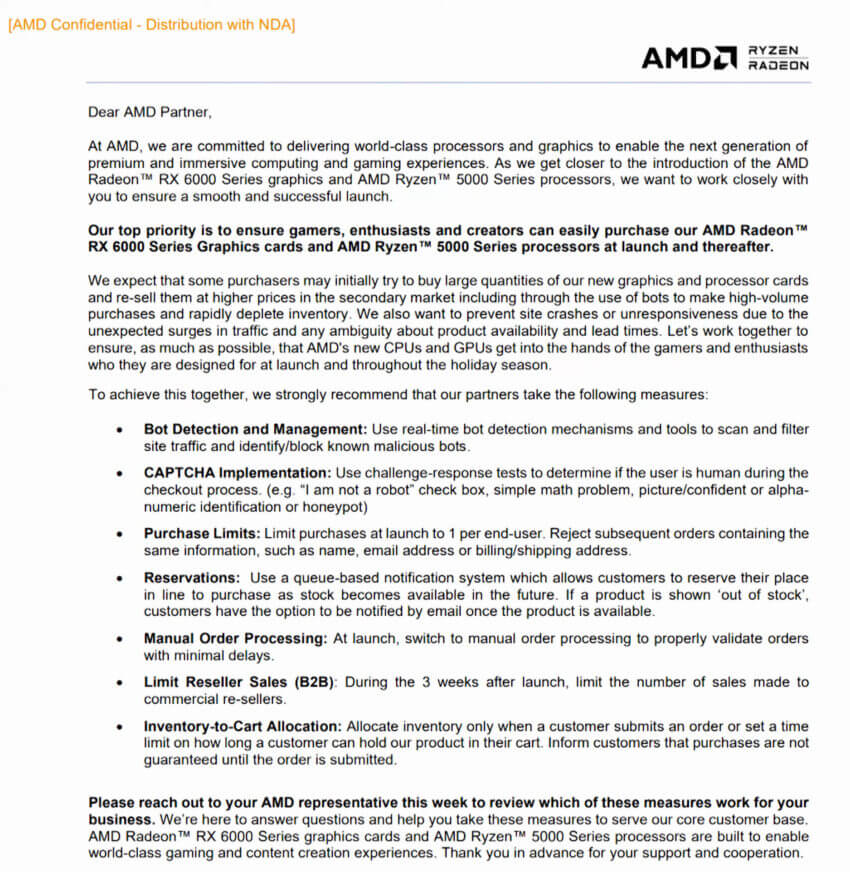 Here is hoping that the demand and supply issue isn’t that aggressive as the Ampere launch. It seems this year it has been hard to purchase a new flagship gaming graphics card. So the demand is bound to be very high.

To make matters worse, Nvidia Ampere GeForce RTX 3080 and 3090 GPU shortages will last until 2021, according to CEO Jensen Huang. So gamers might turn to AMD if they cannot wait till next year.