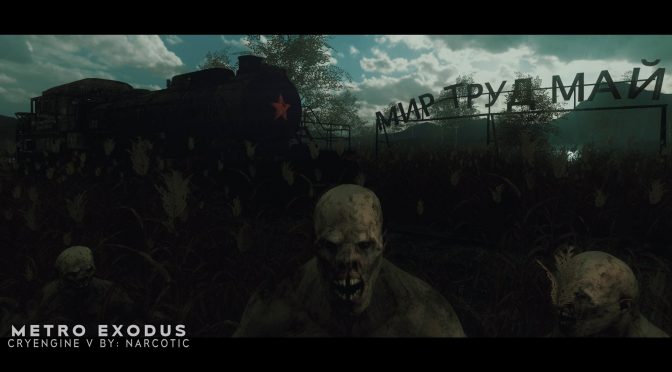 CRYENGINE Lighting Artist, Lindemann Matthias, has released some screenshots from his latest Metro Exodus remake project in CRYENGINE V. Now while this is a fan project, it uses the exact same assets that were used in Metro Exodus, thus making it a pretty faithful “remake” to the original material.

Metro Exodus uses the 4A Engine and, to be honest, it’s really cool witnessing the exact same assets being used in a different engine. Unfortunately, though, this remake currently suffers from a really underwhelming lighting system, and it does not take advantage of the real-time ray tracing effects that Crytek showcased recently at GDC.

The main reason why this CRYENGINE remake does not look that great is mainly because it is captured during a rainy and cloudy day. Metro Exodus uses real-time ray tracing for both Ambient Occlusion and Indirect Lighting, and I can safely say that its implementation in it can significantly improve the visuals in dark/cloudy places. As such, I’d really love to see a ray traced version of this remake in CRYENGINE (now that the engine supports it).

But anyway, as said it’s a pretty cool project that some may find interesting (while other won’t). The fact that it’s created by a CRYENGINE developer is also another reason why I’ve decided to share it with you.