Ragnarok Game released last week Rune 2 on the PC platform. As we’ve already said, this is timed-exclusive on the Epic Games Store and its development team has closed down. While Ragnarok Game is currently looking to build a new team that will support the game, it’s time to benchmark it and see how it performs on the PC platform. 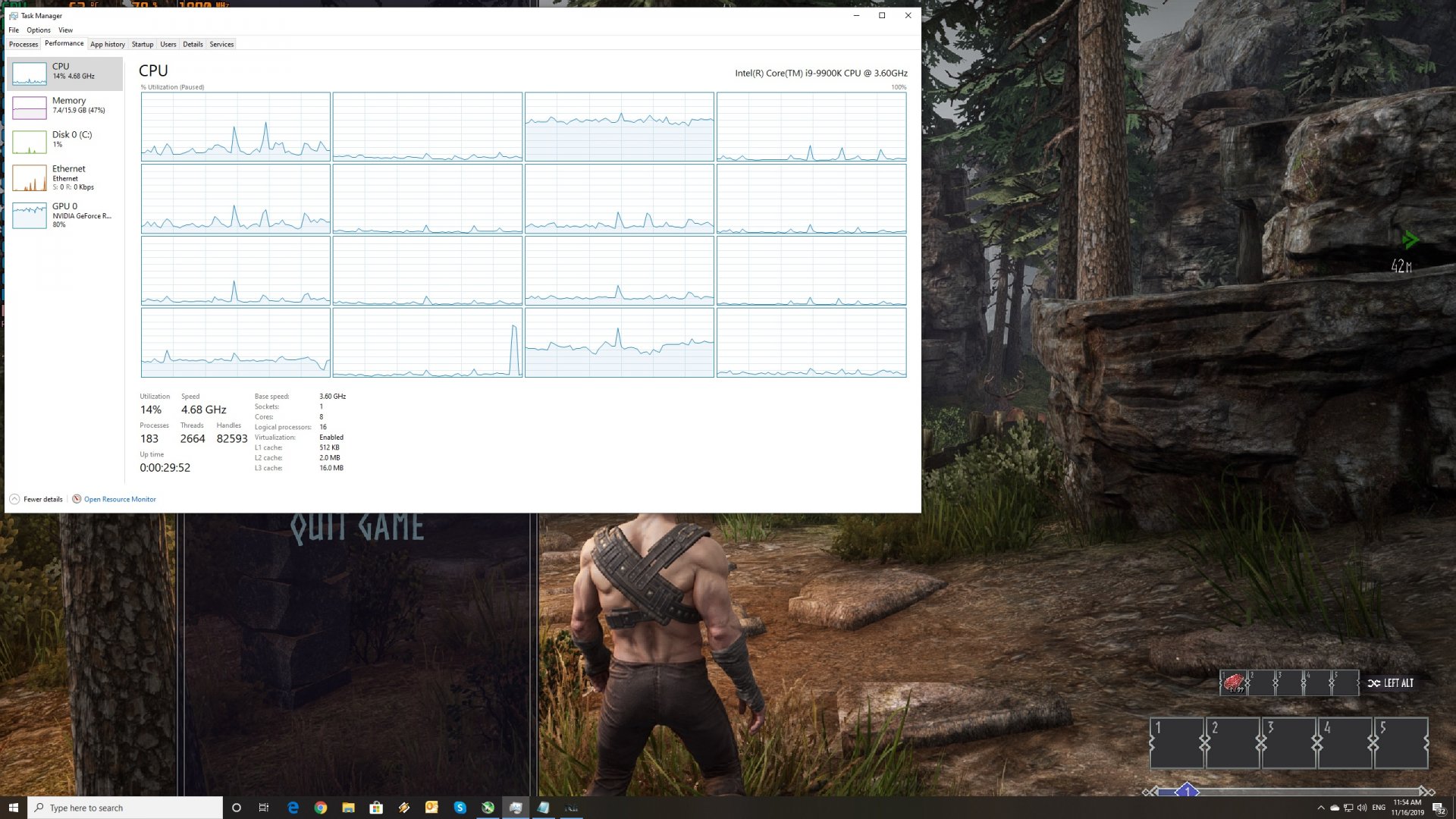 Human Head Studios has added a few graphics settings to tweak. PC gamers can adjust the quality of Anti-aliasing, Post-Process, Shadows and Textures. There are also options for View Distance, Foliage and Effects. Furthermore, the team has added a Field of View slider and a Resolution Scale option. 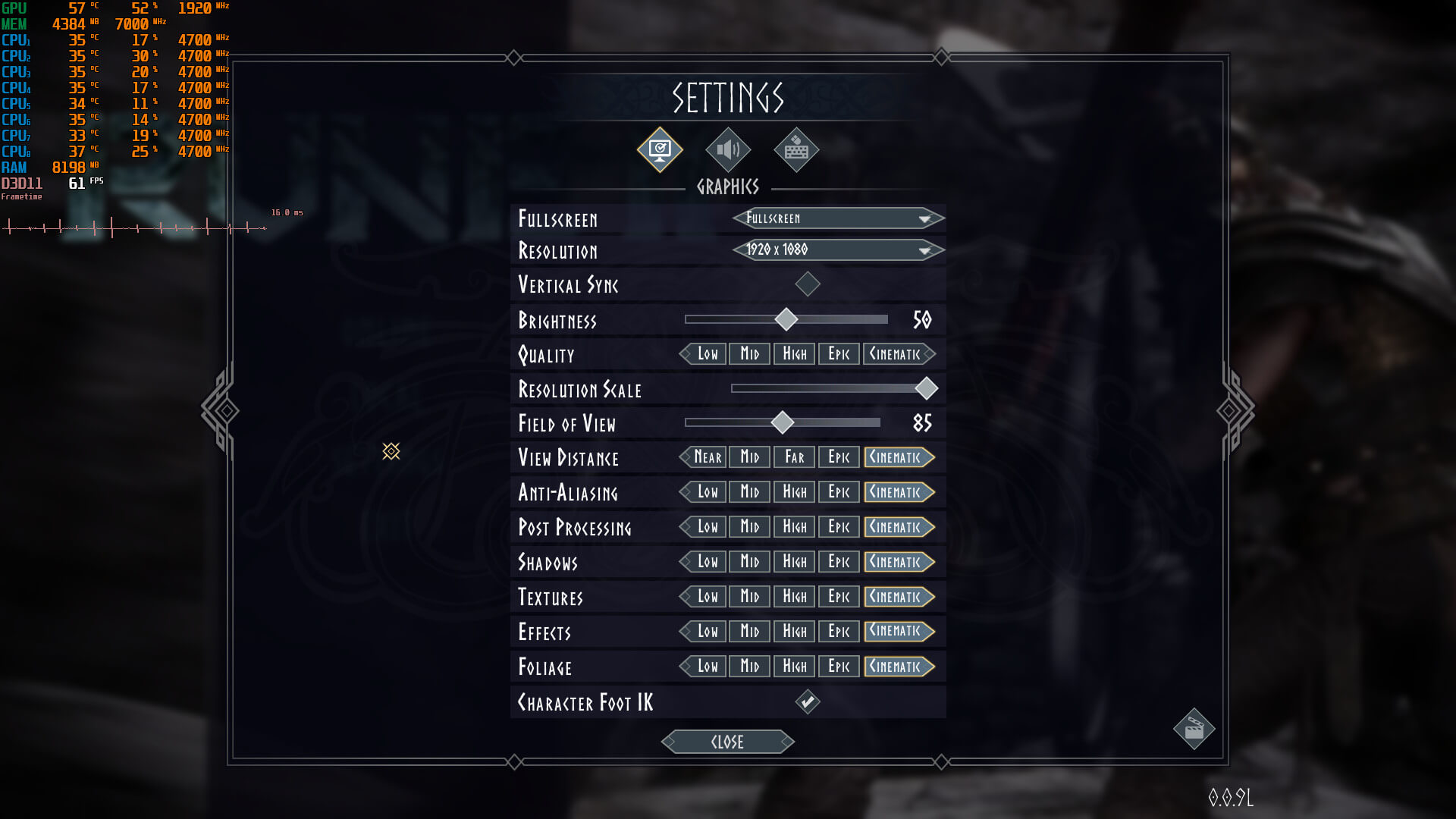 Rune 2 does not have any built-in benchmark tool. As such, we’ve benchmarked the game’s starting area. Rune 2 uses Unreal Engine 4 and only supports DirectX 11. Thankfully, though, the game does not require a high-end CPU.

In order to find out how the game scales on multiple CPU threads, we simulated a dual-core, a quad-core and a hexa-core CPU. And we are happy to report that even our simulated dual-core system was able to offer a 60fps experience. Now the reason I’m saying “60fps experience” is because the game is locked at 60fps. Unfortunately, we could not unlock the framerate from its .ini file. 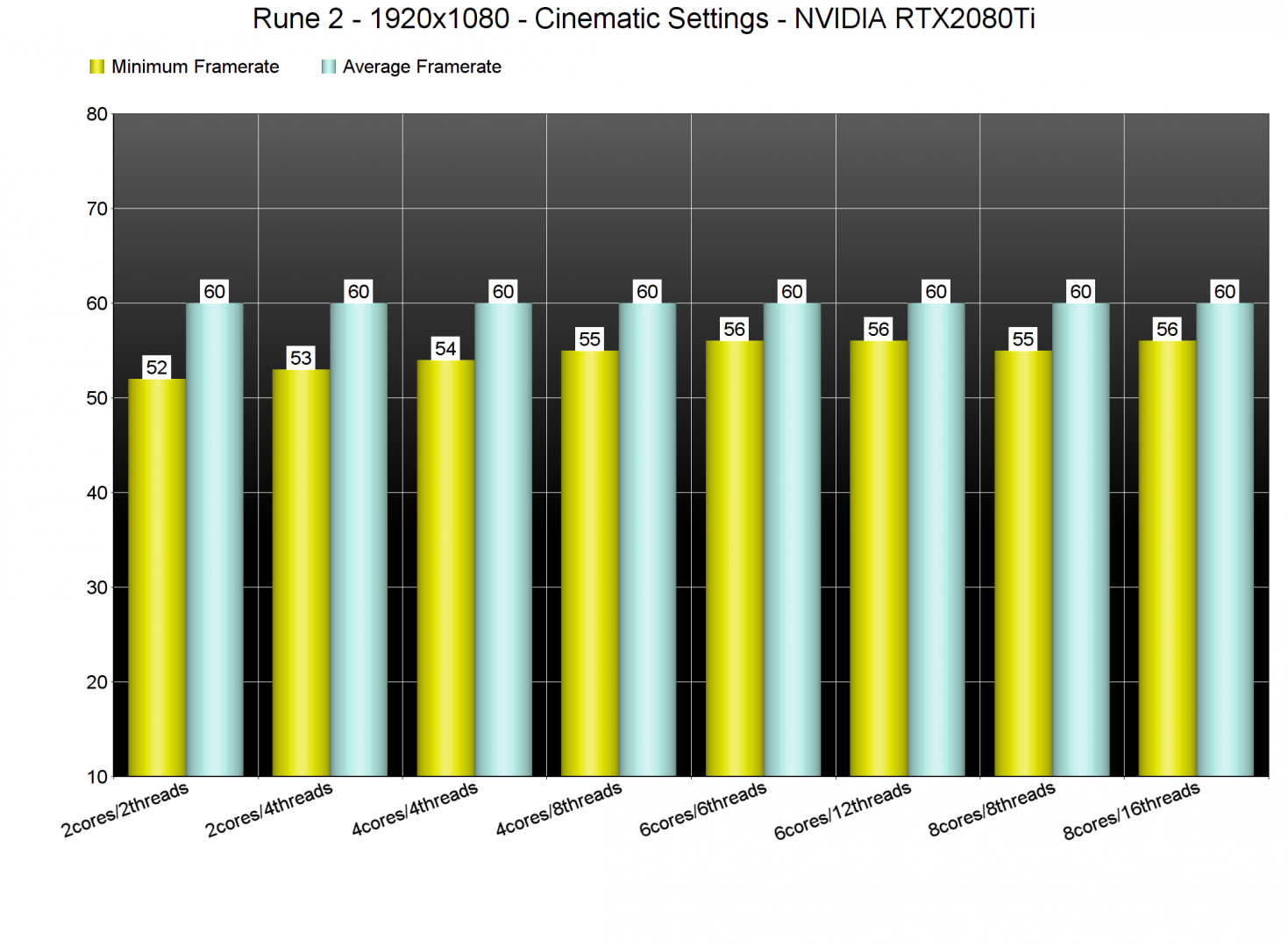 While our average framerate was at 60fps, we did notice some stuttering issues. This is something from which a lot of Unreal Engine 4 games suffer, and Rune 2 is no exception to it. These stutters occur when the game is loading new areas, similarly to the stutters of Star Wars Jedi: Fallen Order.

Moreover, Rune 2 appears to be running great on older CPUs. Our Intel i7 4930K was running the game similarly to the Intel i9 9900K. As such, owners of older PC systems will not encounter any CPU limitation. 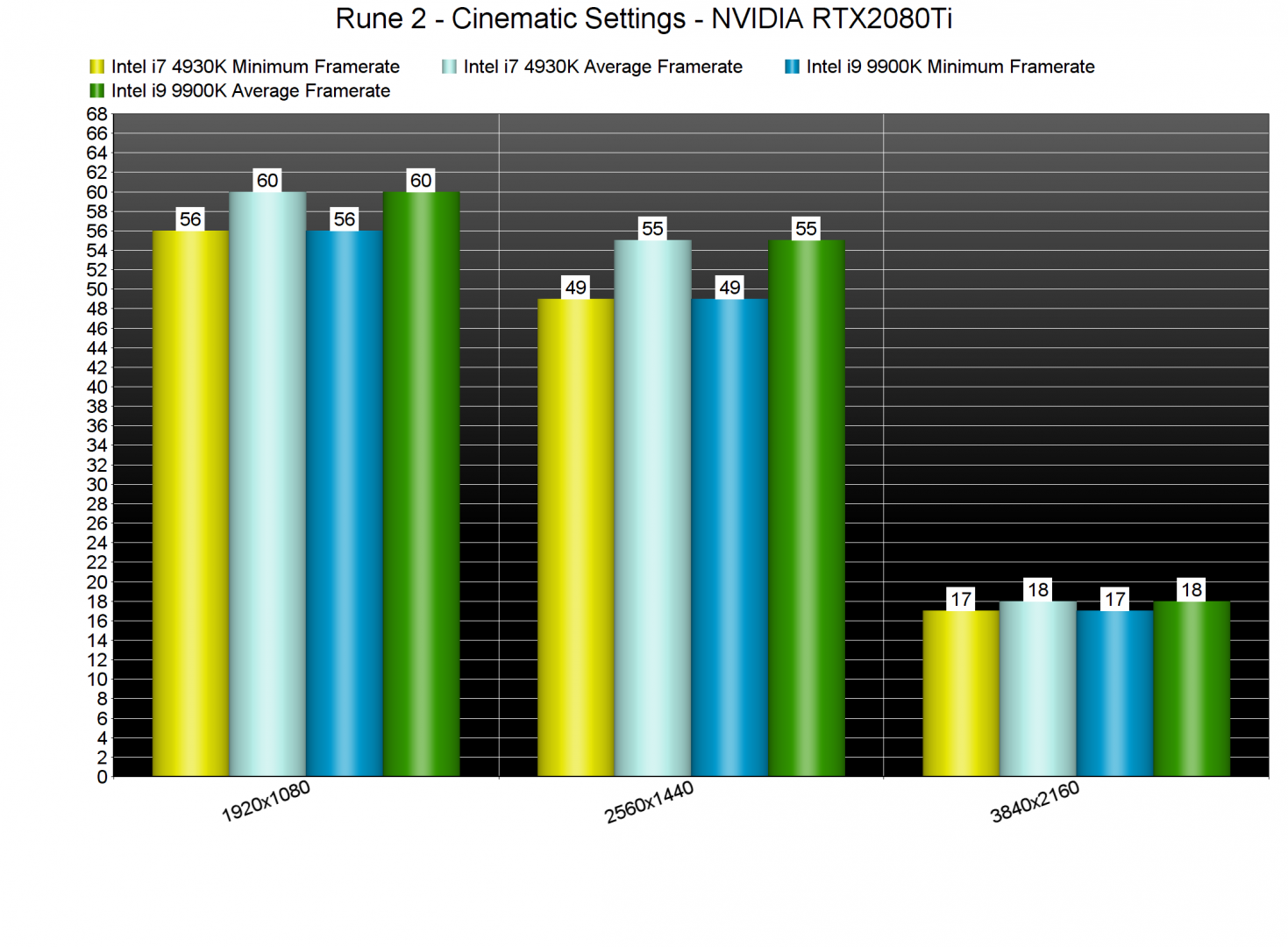 Contrary to its CPU requirements, Rune 2 requires high-end GPUs. Seriously, this game is perhaps the most GPU demanding title we’ve seen in 2019.

At 1080p/Cinematic settings, the only GPU that was able to offer a 60fps experience was the NVIDIA GeForce RTX2080Ti. The AMD Radeon RX580 was running the game with 25fps, whereas the AMD Radeon RX Vega 64 could push an average of 45fps. So yeah, don’t expect to be running the Cinematic settings on anything other than the latest and fastests GPUs. 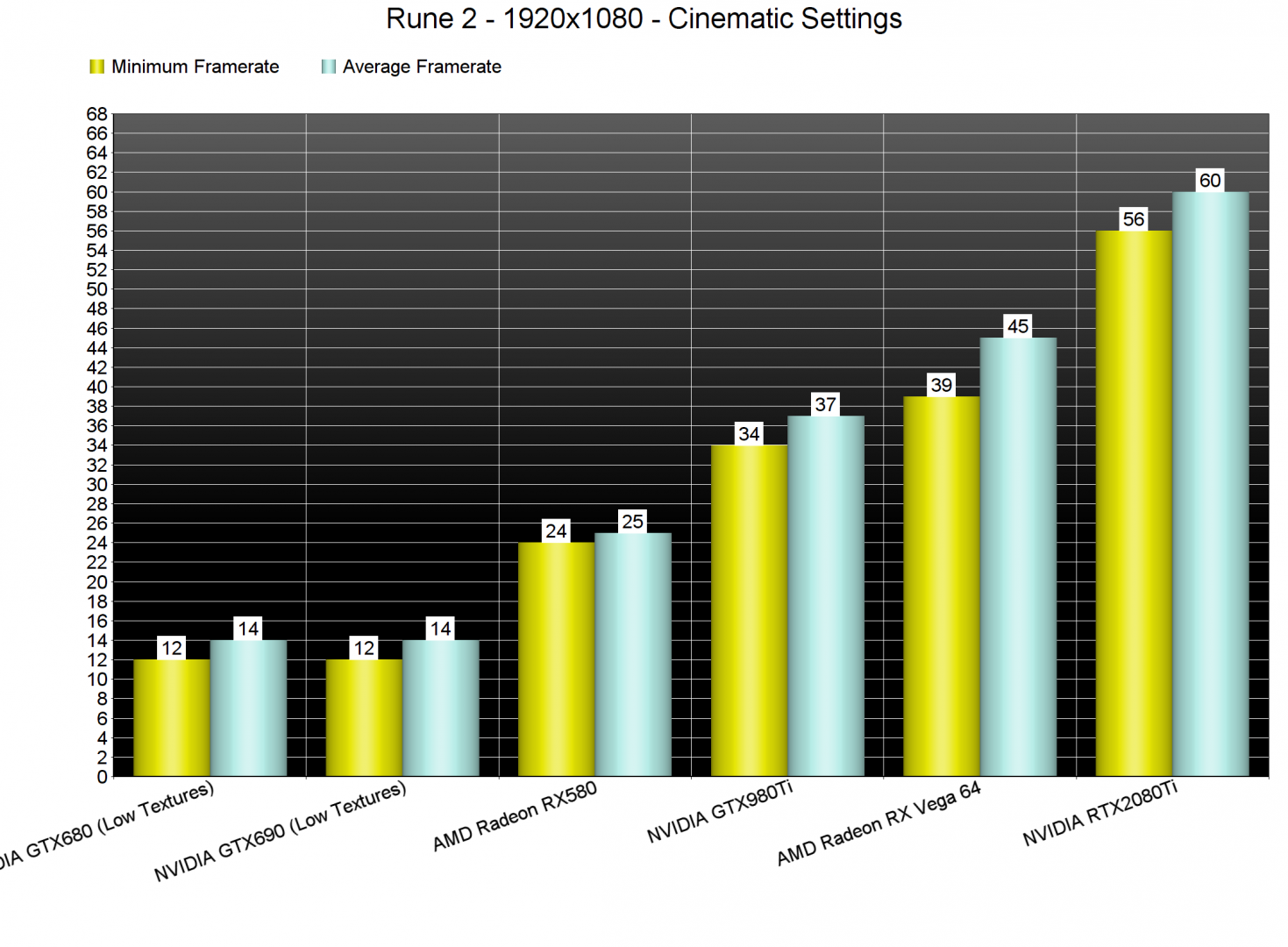 Thankfully, the game can scale on older graphics cards. For instance, we were able to run the game with constant 60fps at 1080p/High on the AMD Radeon RX580. Therefore, we strongly suggest using the High settings (with Cinematic Textures) on most GPUs. The only downside here is that you’ll then have a lot of pop in issues with grass and foliage. 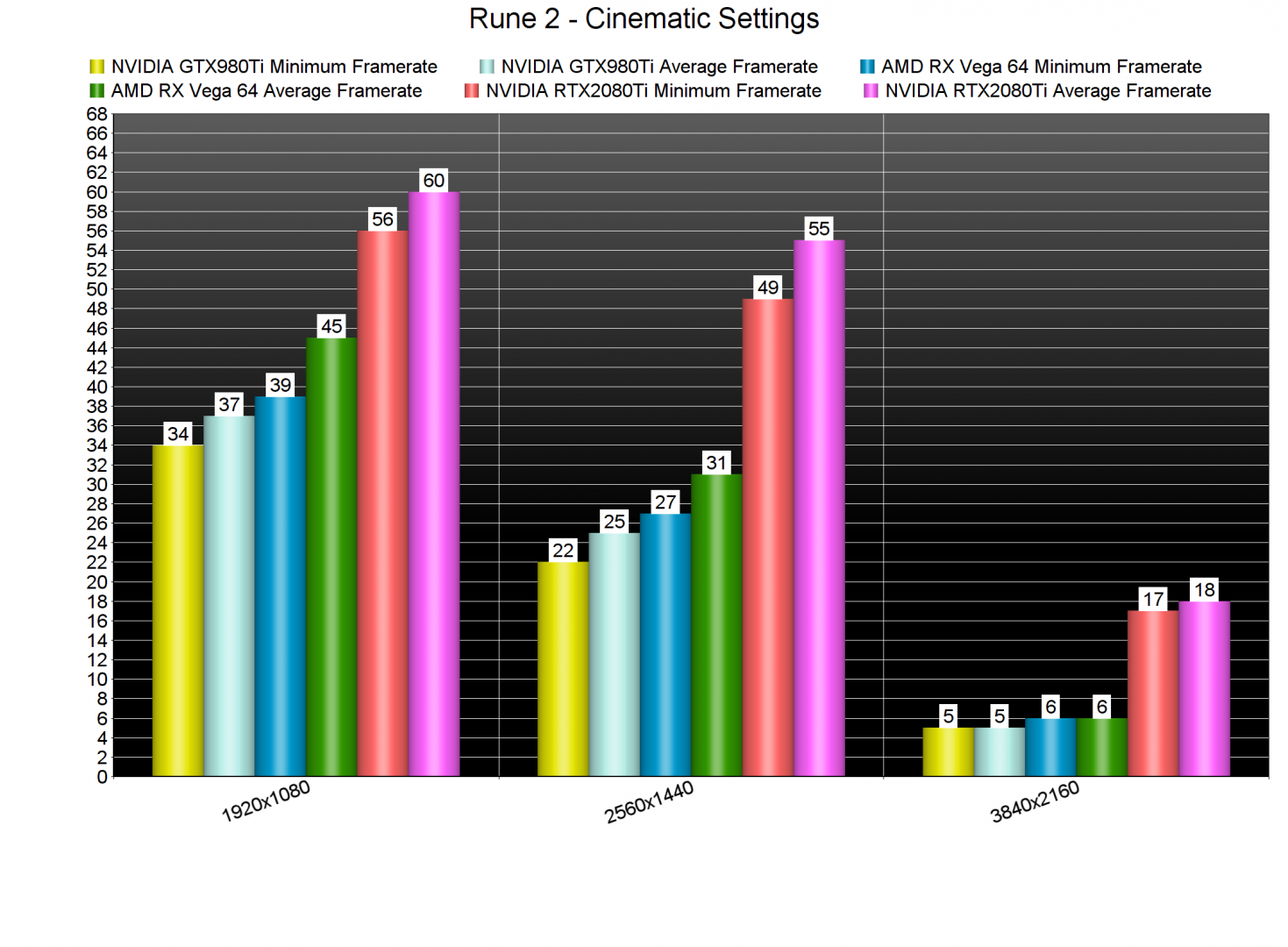 Graphics wise, Rune 2 looks great but it unquestionably does not justify its enormous GPU requirements on Cinematic settings. For the most part, Human Head Studios has used a lot of high-resolution textures. There are some low-res textures here and there, and you will notice some texture alignments issues. The main character is highly detailed and the environments are rich with foliage and grass. Speaking of foliage, players can bend all bushes and grass blades, thus giving  the game a more dynamic feeling to it. So yeah, while the game does not justify its huge GPU requirements, it can still look great… at least for a current-gen title.

All in all, Rune 2 is a mixed bag. On one hand, it can run really smooth on older CPUs. On the other hand, its Cinematic settings do not justify their GPU requirements. Thankfully, PC gamers can improve performance by lowering their settings to Epic or High. Unfortunately, there are A LOT OF pop in issues on High settings, so that’s something that will disappoint a lot of PC gamers. So yeah, Rune 2 definitely needs a performance optimization patch.