While the Gold Edition for Hitman 2 has been available to those who have pre-ordered it since Friday, the regular version of this new stealth game will release on November 13th. And since Warner Bros has provided us with a review code so it’s time now to benchmark this new Hitman game and see how it performs on the PC platform. 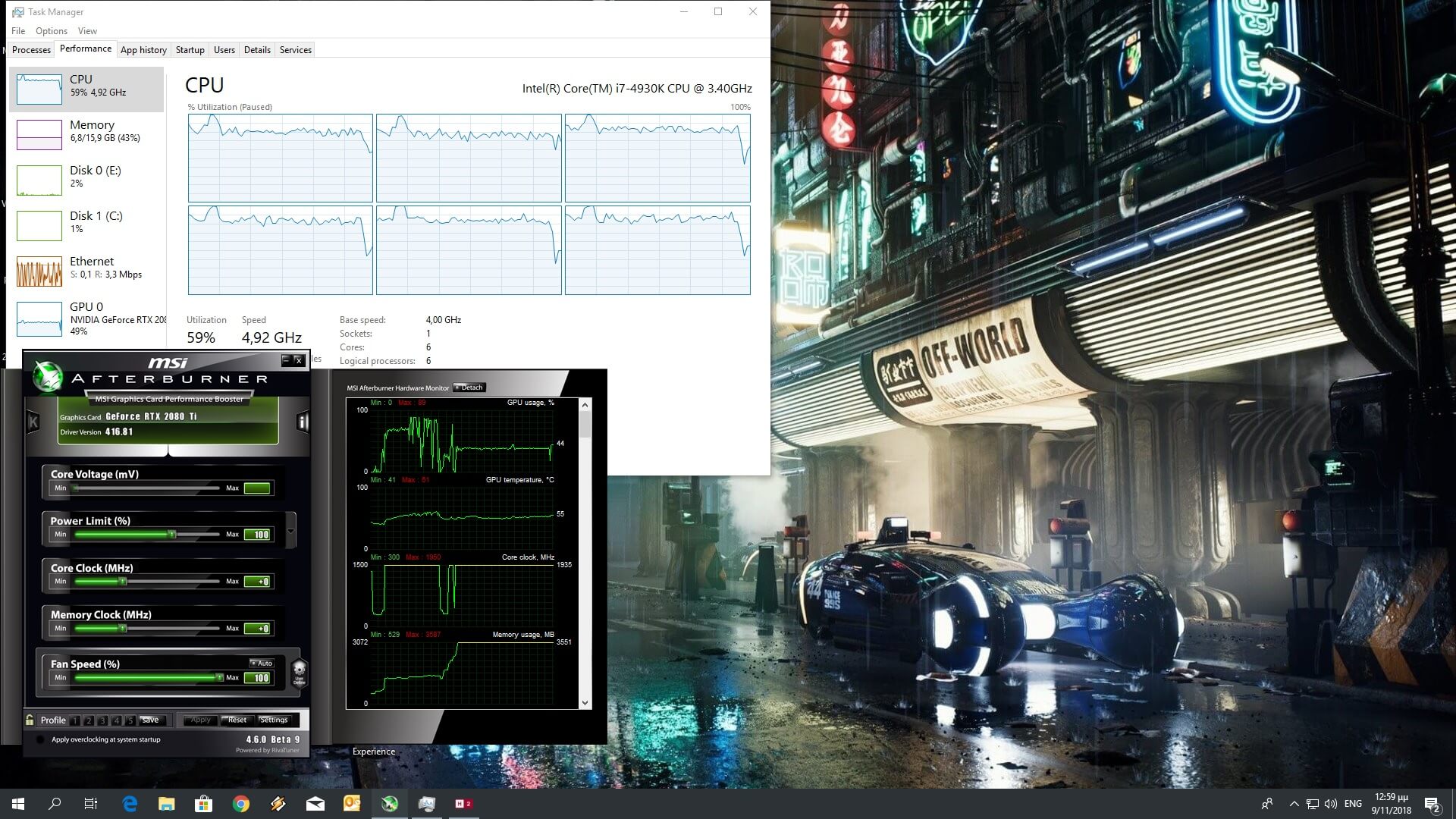 IO Interactive has included very few graphics settings in Hitman 2. PC gamers can only adjust the quality of level of detail, textures, texture filtering, SSAO and shadows, and there is a slider for super-sampling. The game does not support any other for of anti-aliasing, and does not support the DX12 API. Not only that,  but there isn’t any built-in benchmark like it was in the first Hitman game.

As we’ve reported in our PC Performance Analysis for the first Hitman, DX12 API brought some noticeable performance improvements even on NVIDIA’s hardware, especially in scenes that were limited by the DX11 API. As such, we were really disappointed with the lack of a DX12 API in Hitman 2. IO Interactive has definitely dropped the ball and as a result of that, some PC gamers will be limited by their CPUs and the API itself. Since the game does not feature a built-in benchmark tool, we used the following scene for our CPU tests (a scene that really stressed the CPU/DX11 API). 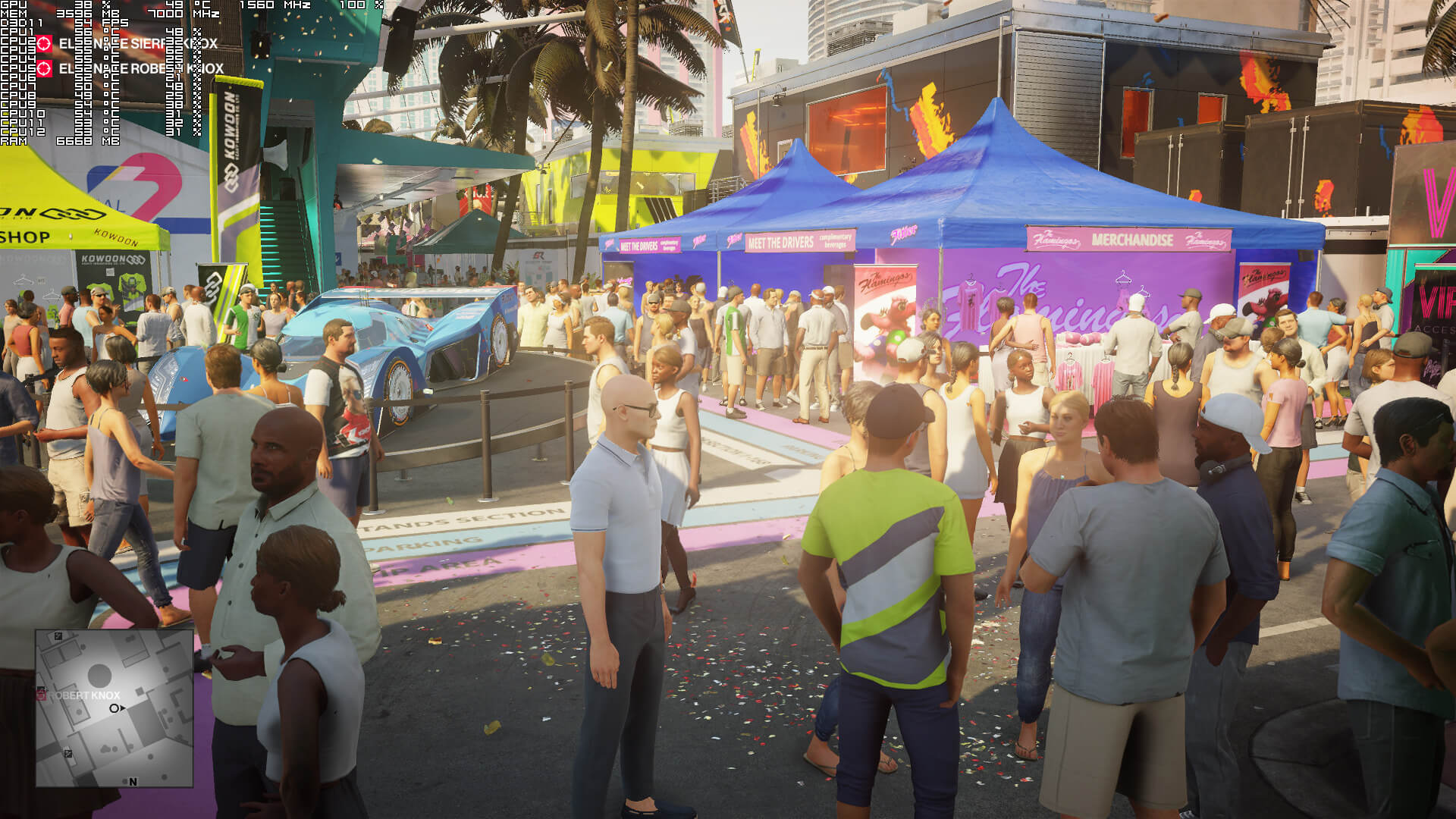 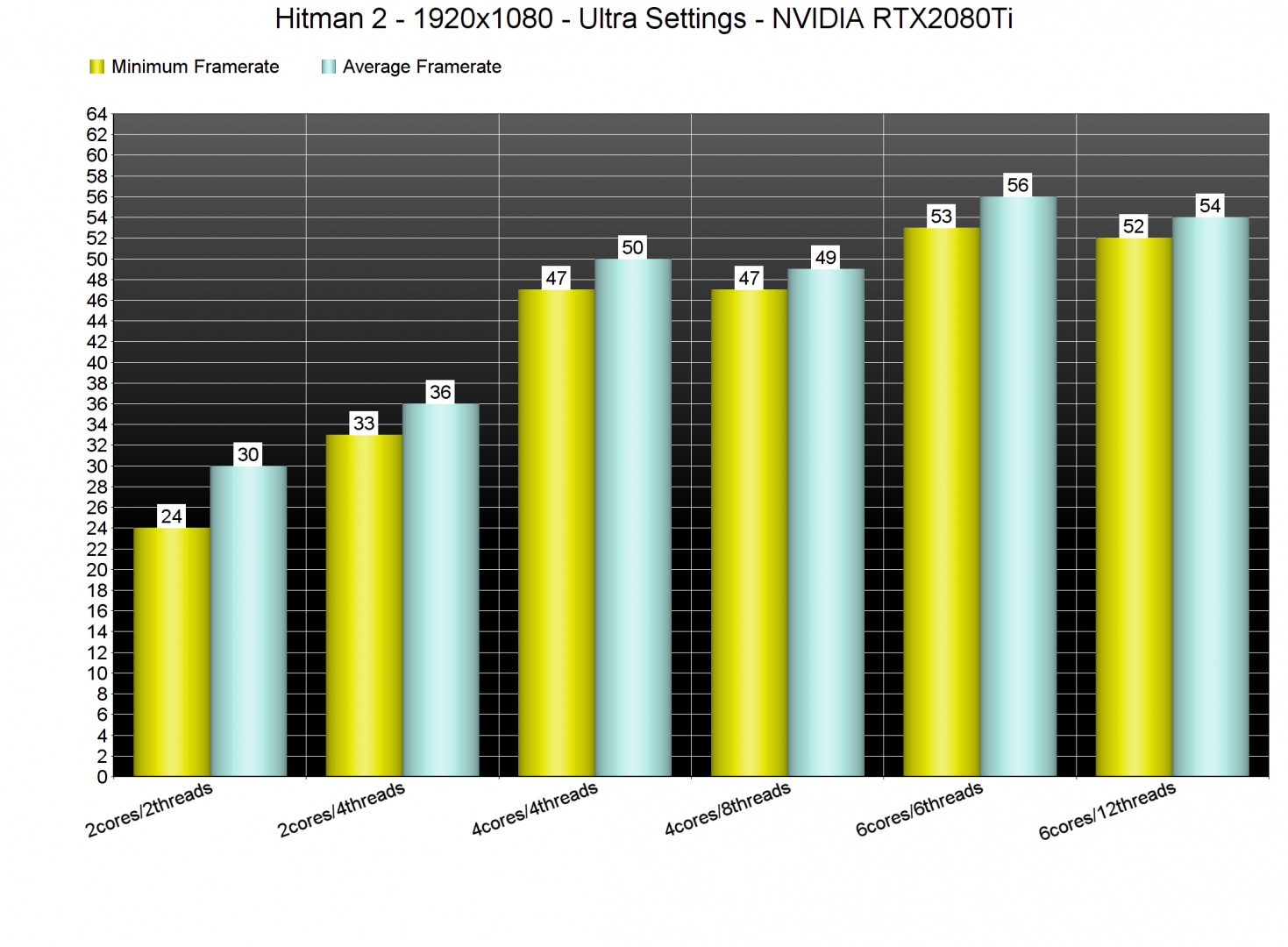 Thankfully, the game does not require a high-end GPU in order to be enjoyed. For our GPU benchmarks we’ve tested the entire Miami level, and we are happy to report that most of our GPUs were able to run the game comfortably at 1080p on Ultra settings. There were some slowdowns to 50s (due to the DX11 API when there were a lot of NPCs on screen in that scene we used for our CPU tests) but for the most part our AMD Radeon RX580, AMD Radeon RX Vega 64, NVIDIA GTX980Ti and NVIDIA RTX2080Ti had no trouble at all running the game. 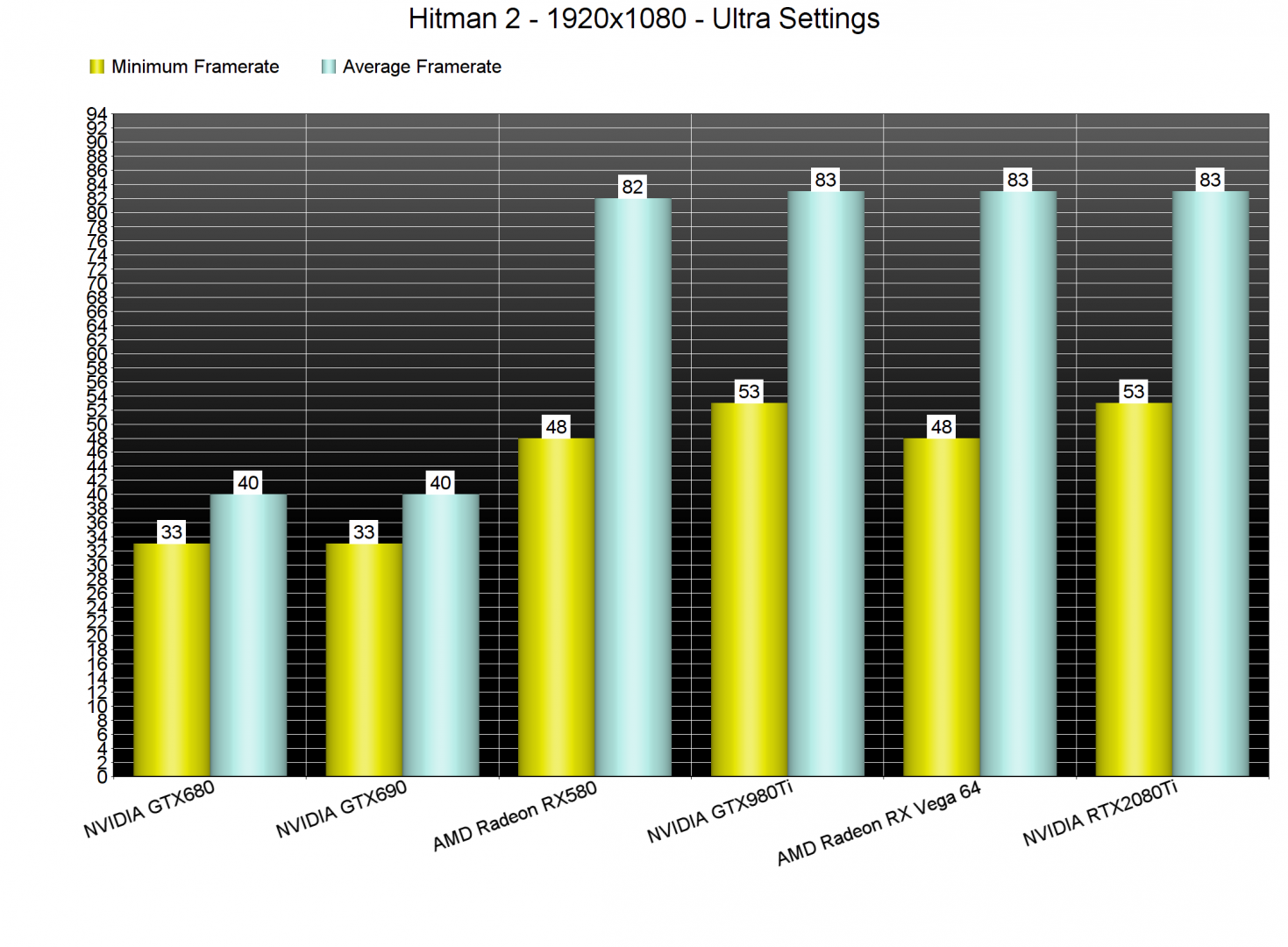 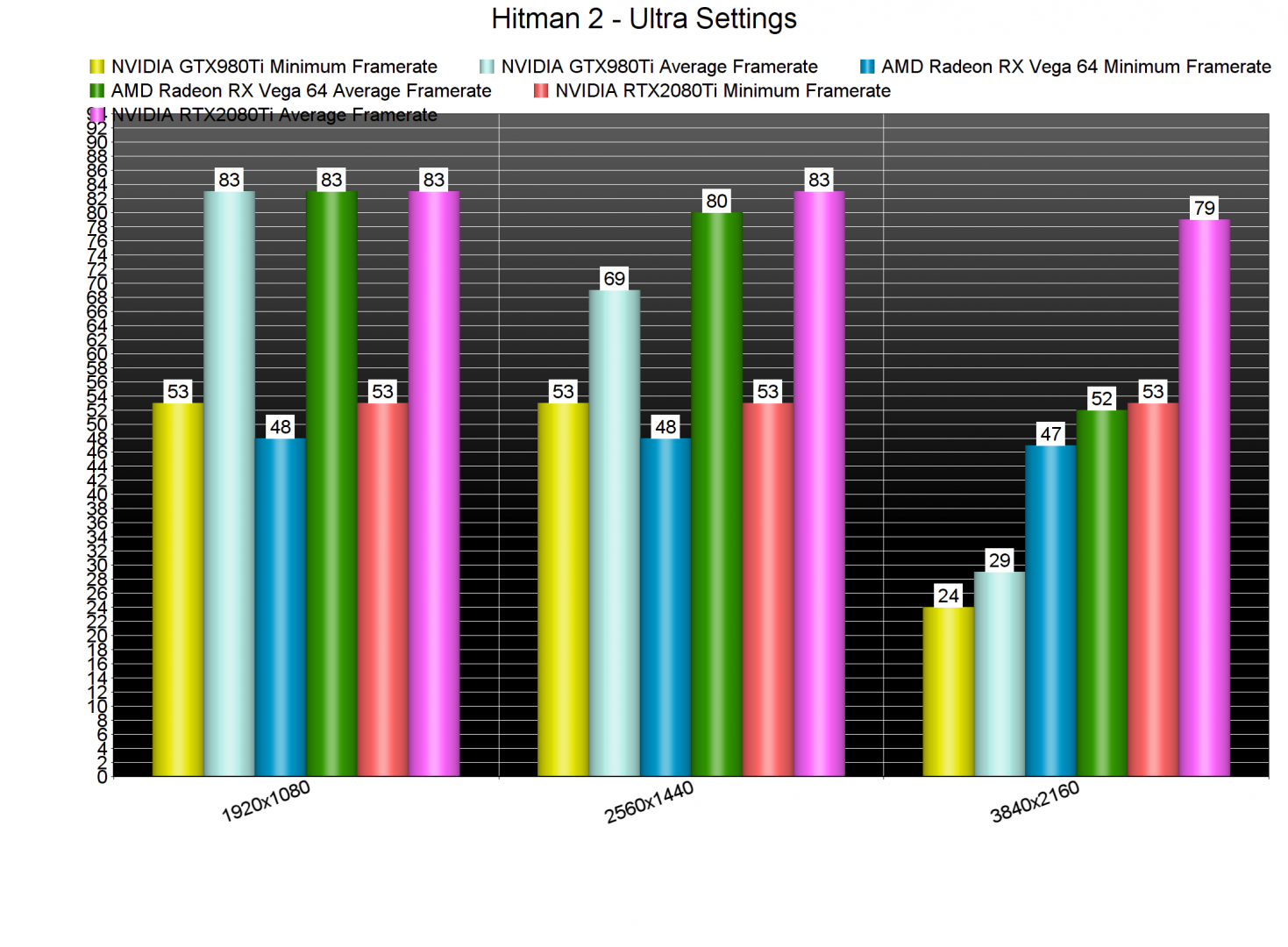 Graphics wise, Hitman 2 is a beautiful game. The lighting system has been overhauled and looks incredible, and it’s easily one of the game’s greatest features. IO Interactive has also used some clever techniques in order to provide proper reflections on specific surfaces and mirrors, and the game uses many high resolution textures. Most character models are detailed, though they are not as detailed as Agent 47 himself. There are also some cool cloth physics effects, as well as swaying grass.

All in all, it seems that although the game runs fine on a variety of systems for the most part, it does suffer from some optimization issues that are caused by the DX11 API. IO Interactive really disappointed us here as the game lacks both the DX12 API and the built-in benchmark tool that its predecessor featured. We’ve seen in the first Hitman game the performance improvements that DX12 can bring to the table so yeah; it’s a big disappointment that its sequel does not support it. Other than that, Hitman 2 looks great and better than the first game, and plays great with mouse and keyboard. So here is hoping that IO Interactive will remove the Denuvo anti-tamper tech (now that the game has been cracked) and that it will add support to DX12!