Control has just been released on the PC, so it’s time to benchmark it and see how it performs on the PC platform. As we’ve already reported, the game is using the Northlight Engine, and is one of the few titles that use ray tracing for multiple features. Moreover, the retail version does not use the Denuvo anti-tamper tech. 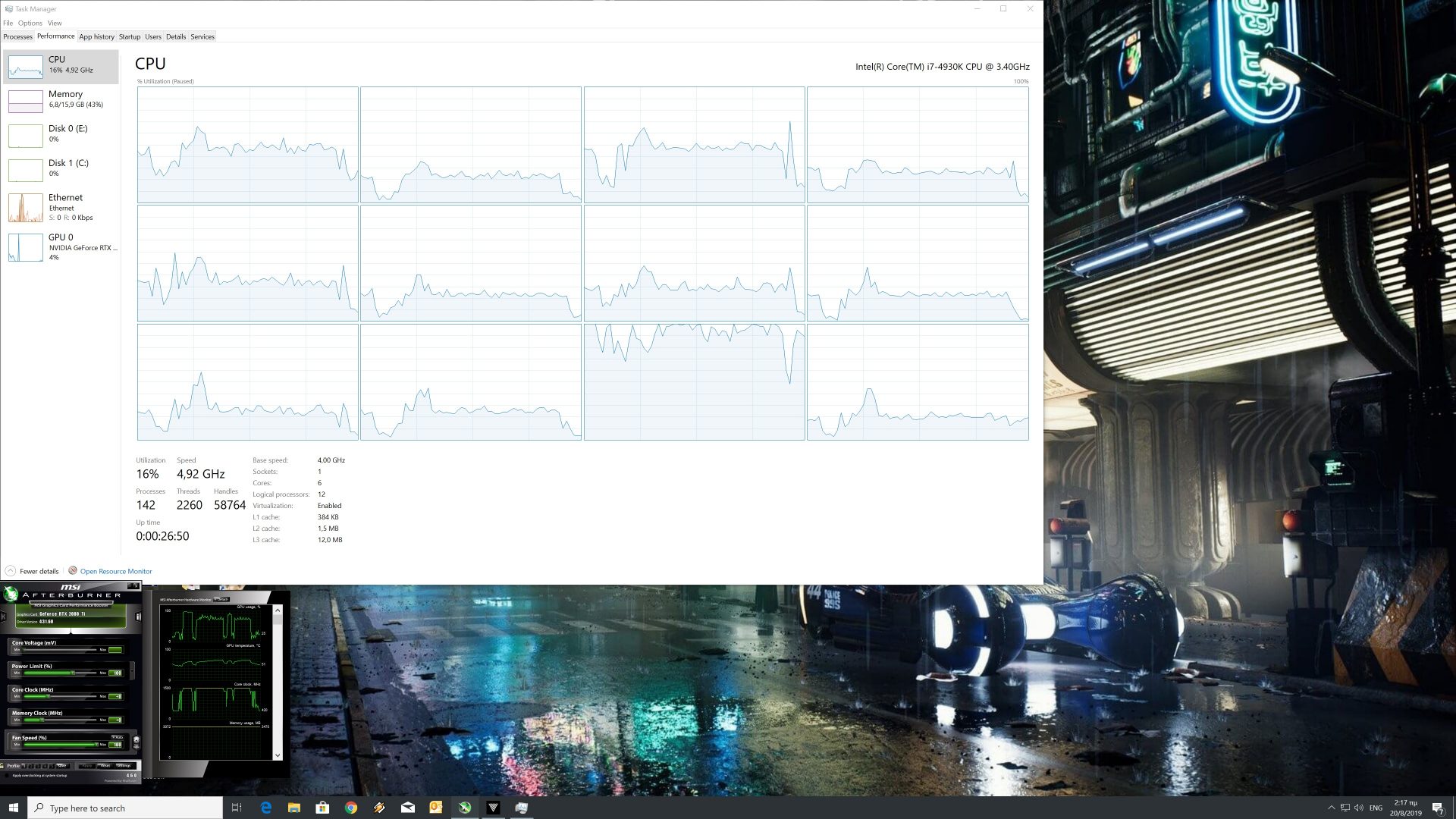 Remedy has added a respectable amount of graphics settings. PC gamers can adjust the quality of LOD, Textures, Texture Filtering, Shadows and Volumetric Lighting. There are also options for SSAO, Screen Space Reflections, Global Reflections, MSAA and Film Grain. The game also support DLSS (you can read more about DLSS performance here) and Ray Tracing. For Ray Tracing, Remedy is offering options for Reflections, Transparent Reflections, Diffuse Lighting, Contact Shadows and Debris. The game also offers two RTX presents: Medium and High. The Medium preset enables the first two options, whereas the High preset enables all options. Last but not least, there is a Resolution Scaler. 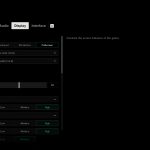 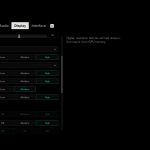 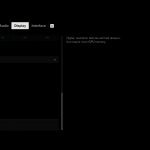 Let’s start with the good news; Control does not require a high-end CPU. In order to find out how the game scales on multiple CPU threads, we simulated a dual-core and a quad-core CPU. We also lowered our resolution to 720p in order to avoid any possible GPU limitation. As such, we are happy to report that even this dated CPU is able to provide a constant 120fps experience.

Control supports both DX11 and DX12. Contrary to Quantum Break, the performance between these two modes was almost identical. As such, we decided to only benchmark the DX12 version. And believe it or not, even our simulated dual-core system was able to offer a 60fps experience (though there were some noticeable stutters while loading new areas). What this basically means is that the game will run fine on a variety of CPUs. 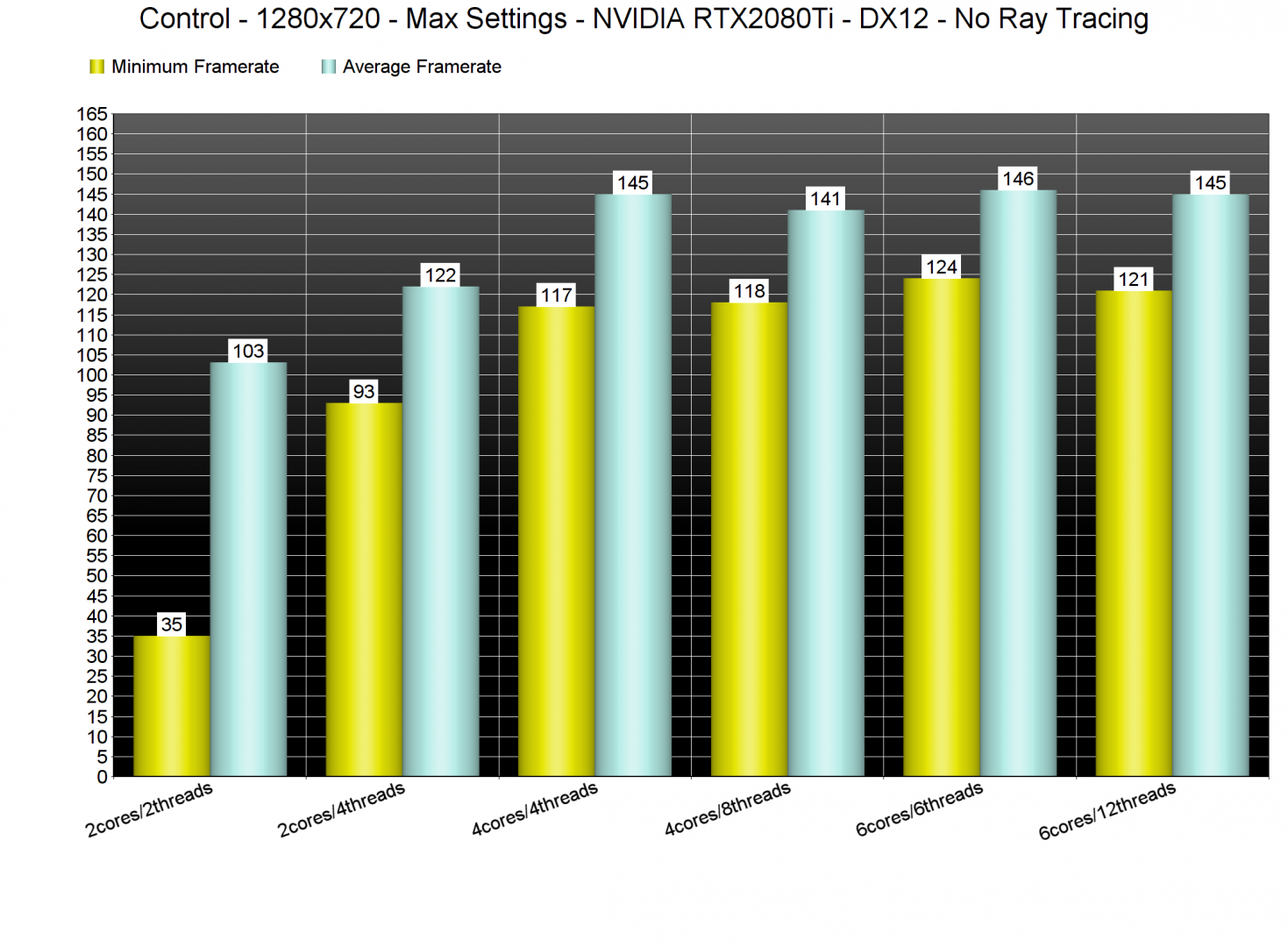 For our GPU benchmarks, we tested the second cleansing point of the game. While the starting areas were running faster, this particular scene appeared to be among the most demanding areas of the game. As such, and in order to provide you with a more realistic performance report, we used that one. For Control’s DLSS performance, we suggest reading the article we published yesterday.

Control is one of the most GPU-demanding games available on the PC. The only GPUs that were able to provide a smooth gaming experience at 1080p/Max settings were the Radeon RX Vega 64 and the RTX2080Ti. The GTX980Ti came close to a 60fps experience, whereas the RX580 can offer a 30fps experience. Do note, however, that despite its huge GPU requirements, Control actually runs better than Quantum Break. 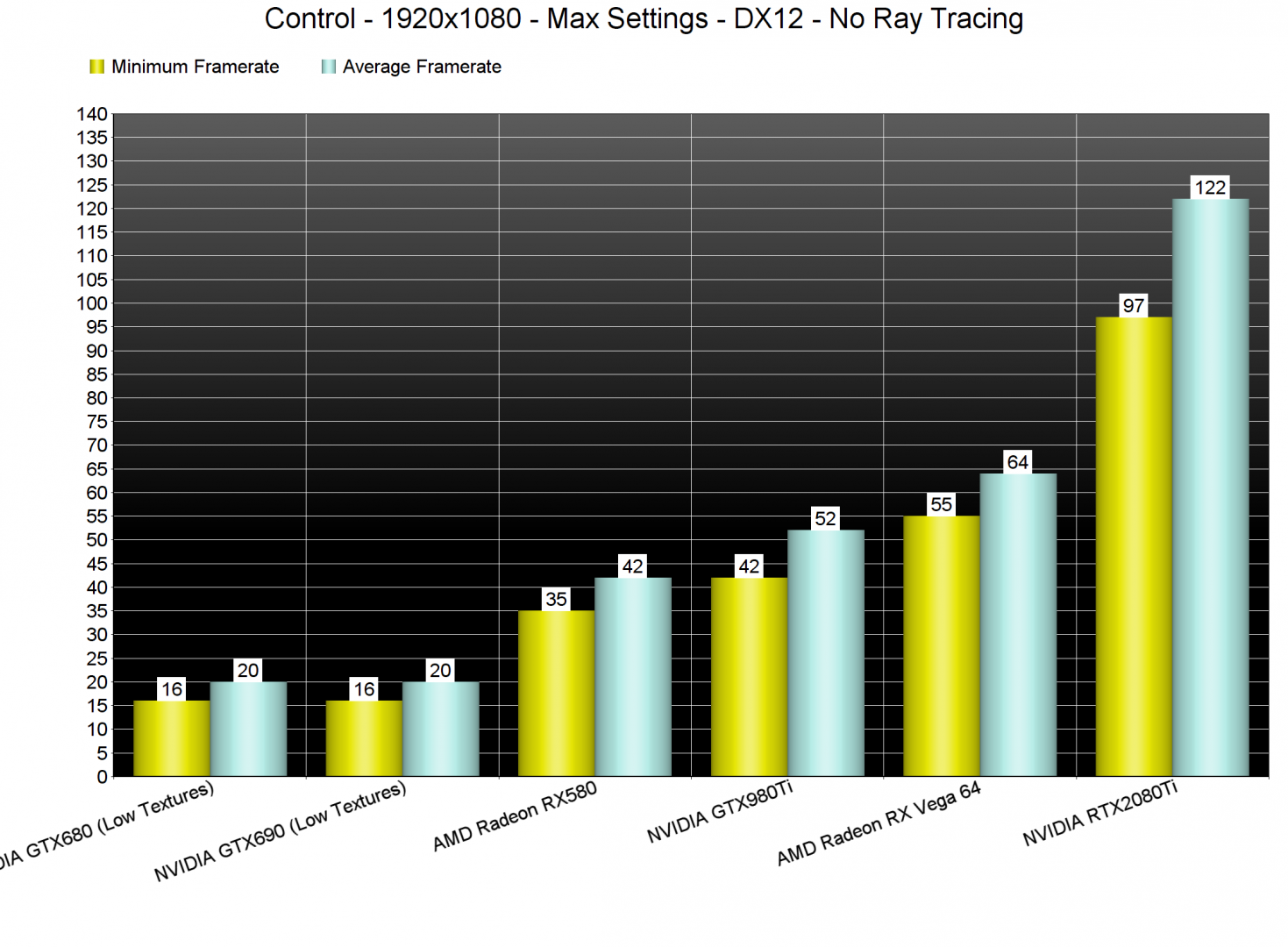 At 2560x1440, only the RTX2080Ti was able to offer a smooth gaming experience. And in 4K, the RTX2080Ti was pushing a minimum of 34fps and an average of 40fps. Now the good news for all 4K owners is that by using DLSS, you can actually get a constant 60fps experience. Of course the image quality is not identical to native 4K, however it’s better than native 1440p. 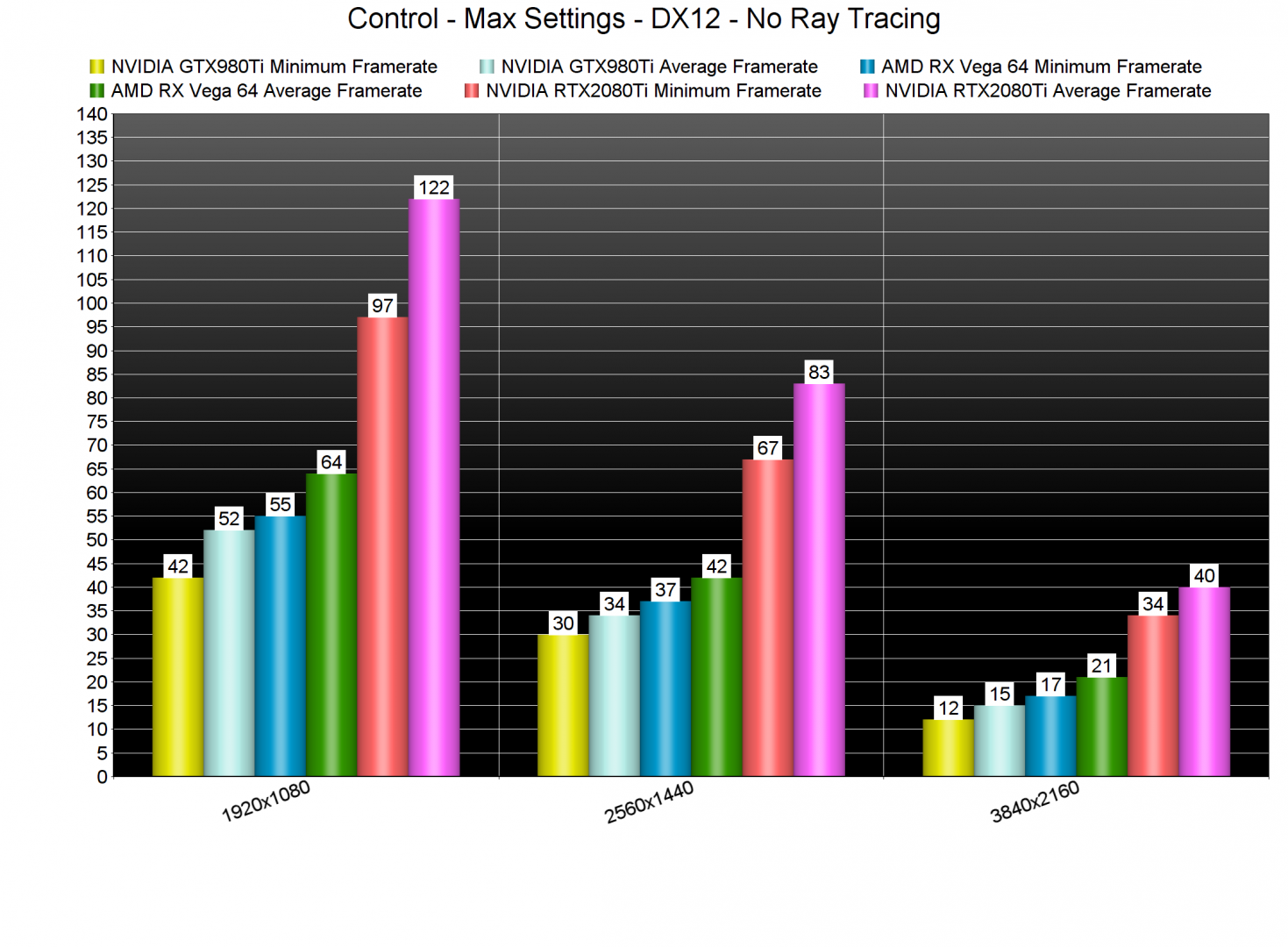 Of course these performance figures are without the Ray Tracing effects enabled. And as you may have guessed, Ray Tracing introduces a huge performance hit. Without DLSS, our RTX2080Ti was simply unable to run the game with constant 60fps at 1080p/Max settings with High Ray Tracing. The only way via which NVIDIA users will be able to enjoy Ray Tracing in Control is by using DLSS. Thankfully, though, the DLSS implementation is great in Control. 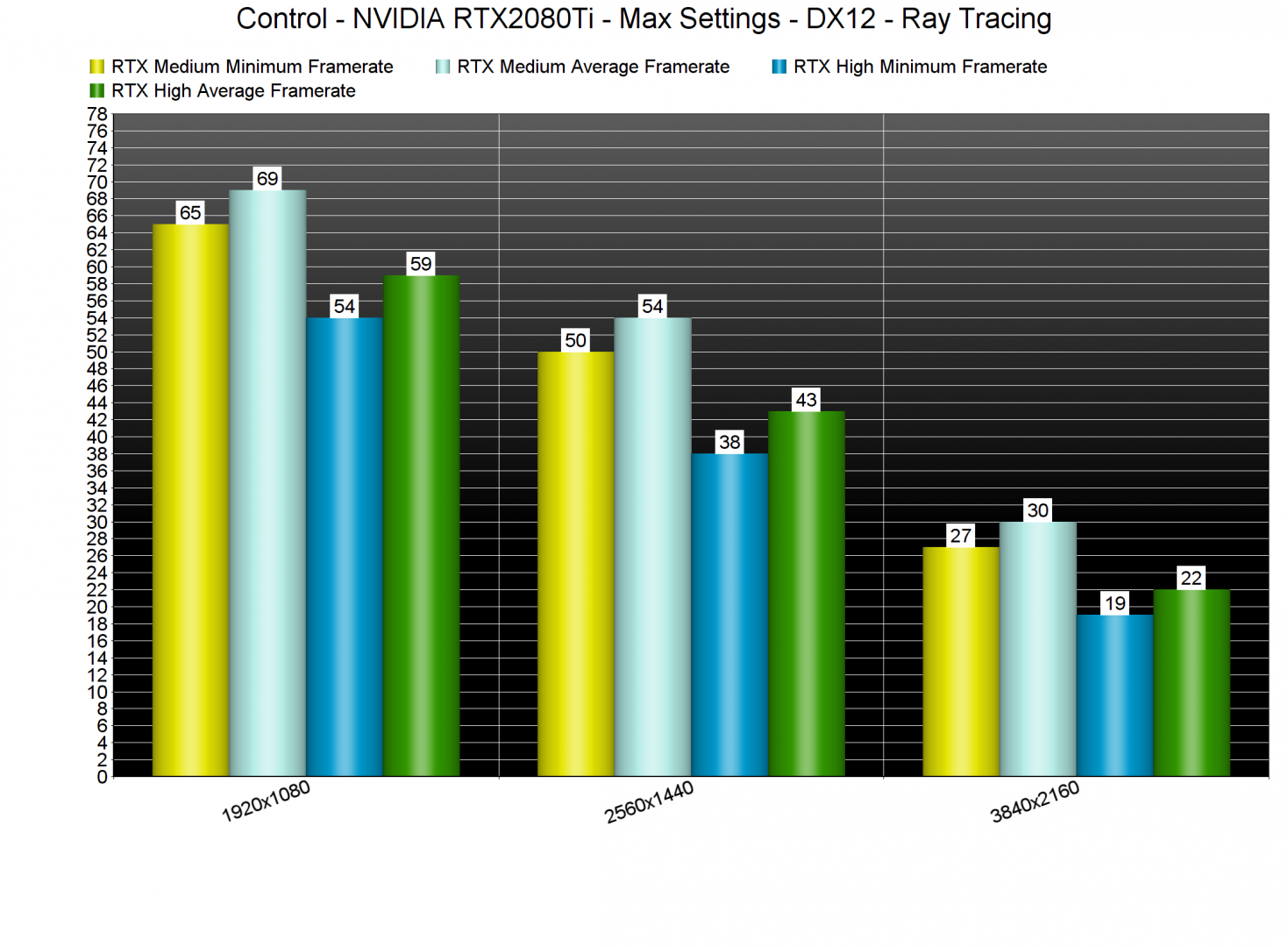 Other than that, Control looks as good as Quantum Break. In case you forgot how good Quantum Break looks to this date, go ahead and take a look at these screenshots. All characters are nicely detailed and the environments look amazing. As with Quantum Break, the lighting system in Control looks phenomenal. The Ray Tracing effects are also cool, though the game looks stunning even without them. The game also has great environmental destruction, something that will please a number of gamers. Players can destroy chairs, tables, and cans, and can interact with various environmental objects.

All in all, Control is a GPU-heavy title. Yes, you’ll need a high-end GPU in order to enjoy this game, no doubt about that. However, we believe that the game’s visuals justify these requirements. Moreover, and as Remedy claimed, the game does actually run better than Quantum Break. And to be honest, we can’t wait until we get more powerful GPUs that can run it in 4K with Ray Tracing (obviously with DLSS). Below you can find some 4K screenshots with Ray Tracing, showcasing how glorious the game can actually look.