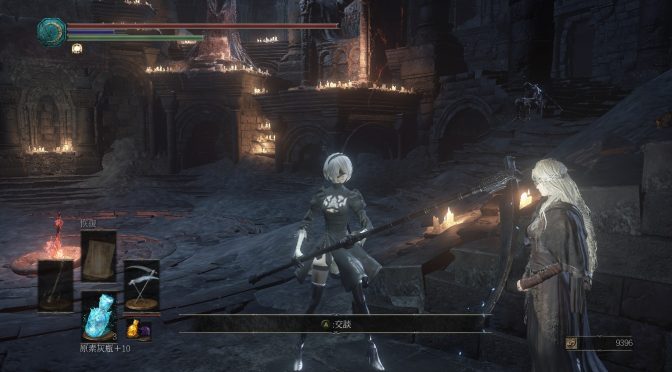 NieR Automata’s 2B has found her way in a lot of games. In the past few months, we’ve seen mods introducing her in Monster Hunter World, Sekiro: Shadows Die Twice, The Elder Scrolls V: Skyrim, and the first Dark Souls game. And today, we are bringing you new a mod that allows you to play as her in Dark Souls 3.

Created by modder ‘Forsakensilver’, this mod replaces the Fallen Knight set with 2B’s 3D model from NieR Automata. This mod is the ported version of the Sekiro’s 2B mod that we have recently reported (so be sure to also download that one if you are playing Sekiro).

In short, this is just a 3D model swapper and nothing more. Still, I’m almost certain that a number of players will be interested in it. 2B’s 3D model suits the game’s atmosphere and does not feel visually and aesthetically out of place (okay okay, it does not make sense to have a robot-girl with a skirt in a game like Dark Souls 3 but still).

Now I have to say that it would be kind of cool to see a similar mod for Shadow of the Tomb Raider, Resident Evil 2 Remake or Street Fighter V (a 3D model replacement for Chun Li or Cammy would be kind of cool). Right now I can’t think of any other game that would “benefit” from such a mod, though I’m pretty sure that modders will attempt to bring 2B in more games.