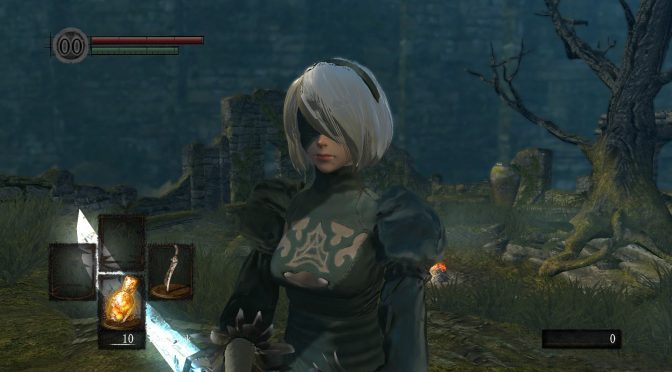 Modder ‘CherryDoom’ has released a brand new version of the NieR Automata 2B mod for both the original and the remastered versions of Dark Souls. In case you weren’t aware of, this mod replaces the main 3D model with 2B from NieR Automata.

The mod replaces the Wanderer Armor set, and the Thief Black Leather Set so you can get it at the start of the game by selecting the Thief class. The mod works for both male and female characters and parts are separated so they can be mixed and matched with original Dark Souls armor, though only the full outfit has been tested for collision issues.

Version 2.1 adds a brand new reworked 3D model for 2B, as well as Cruel Oath to replace Iaito and Virtuous Contract to replace Uchigatana. Moreover, it removes katana scabbards.

It’s a pretty cool mod that a lot of 2B fans will appreciate. 2B has found her way on both Dark Souls and Monster Hunter World via mods, as well as on Soul Calibur VI thanks to Bandai Namco.

Those interested can download the mod for the original Dark Souls from here and for Dark Souls Remastered from here.