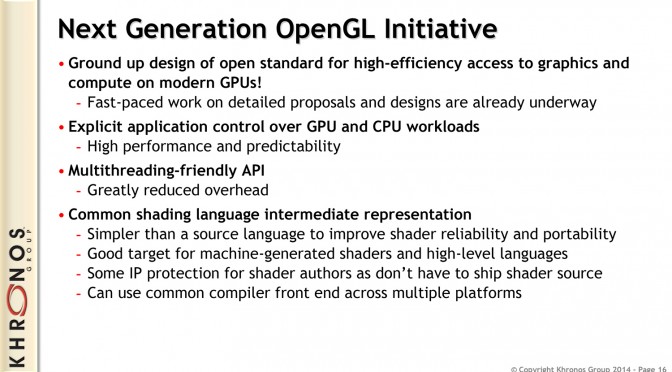 The Khronos Group, an open consortium of leading hardware and software companies, today announced the availability of technical previews of the new Vulkan open standard API for high-efficiency access to graphics and compute on modern GPUs used in a wide variety of devices.

As the press release reads, this ground-up design, previously referred to as the Next Generation OpenGL Initiative, provides applications direct control over GPU acceleration for maximized performance and predictability, and uses Khronos’ new SPIR-V specification for shading language flexibility. Vulkan initial specifications and implementations are expected later this year and any company may participate in Vulkan’s ongoing development by joining Khronos.

“Industry standard APIs like Vulkan are a critical part of enabling developers to bring the best possible experience to customers on multiple platforms. Valve and the other Khronos members are working hard to ensure that this high-performance graphics interface is made available as widely as possible and we view it as a critical component of SteamOS and future Valve games.”

Khronos is offering special preview sessions for insights into the Vulkan architecture.

Vulkan: The Future of High Performance Graphics – hosted by Valve
Thursday, March 5 at 10-11AM
Venue: Room 2006 in the West Hall of the GDC Conference
A technical preview of the Vulkan API, with advanced techniques and live demos of real-world applications running on Vulkan drivers and hardware