Deep Silver and Daedalic Entertainment announced their latest adventure game that will be based on the popular fantasy world of The Dark Eye. In The Dark Eye: Chains of Satinav, players get to experience a brand new point & click adventure set in Aventuria, from the makers of The Whispered World. Alongside its announcement, Deep Silver released the game’s first screenshots that sport the best 2D graphics we’ve ever seen and can be viewed after the jump.

With a history of more than 25 years, The Dark Eye is one of Europe’s best-known role-playing brands. In addition to the popular pen & paper adventures, TDE has also inspired a series of successful computer games. The Dark Eye: Chains of Satinav immerses players deep in the world of Aventuria, where they experience an amazing story and explore lands never before featured in a TDE computer game.

The first screenshots show locations in Andergast, a back-water kingdom in the northwest of Aventuria, where the story centered around young trapper Geron begins. All backgrounds and characters in Chains of Satinav are hand-painted and animated in great detail and full HD resolution.

In Andergast, whose inhabitants are considered to be notoriously superstitious, King Efferdan awaits a state visit from high-ranking dignitaries. For centuries the kingdom has been at odds with neighboring Nostria, but now first steps are being undertaken toward a lasting peace. But a plague of crows troubles the king, for the birds are acting with unusual aggressiveness, even attacking humans. Moreover, there are those among the citizens of Andergast who swear that the crows are bringing them dark nightmares. As the belligerent creatures infiltrate even the castle itself, the king seeks a skilled bird catcher – an opportunity for young Geron to prove that the reputation for ill luck that has followed him since childhood is undeserved. Following an audience with the king, the prestigious task is assigned to him. However, not only does his task prove unexpectedly difficult, but it also turns out to be the first step of the greatest adventure of his life, which will lead him to the borders of the charted lands of Aventuria and beyond.

The Dark Eye: Chains of Satinav is developed by Daedalic Entertainment and co-published for the PC by Deep Silver in Germany, Austria, Switzerland, France, and Italy. 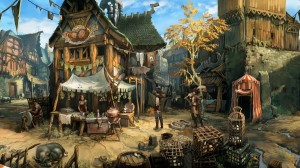 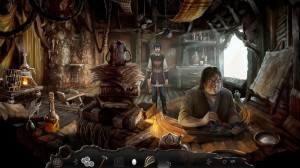 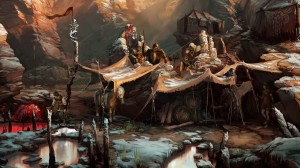 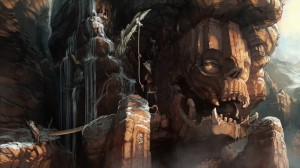 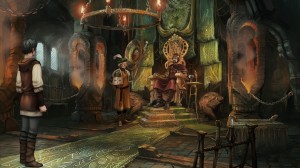