NeoGAF’s member ‘Nirolak’ has found out that Square Enix is currently working on four unannounced online titles. This information comes straight from the LinkedIn profile of Square Enix’s former Associate Producer, Derek S. Hernandez. According to his profile, Hermandez oversaw service for a live MMO from beta through post-launch while concurrently assisting in the coordination of four unannounced and in-development online titles.

Derek S. Hernandez LinkedIn experience when he was an associate producer at Square Enix was:

• Oversaw service for a live MMO from beta through post-launch while concurrently assisting in the coordination of four unannounced and in-development online titles.
• Played a key role in managing an international partnership involving two publishers working together to meet the needs of both consumer-bases simultaneously on a global scale.
• Managed cross-discipline teams to carry out a live service to establish a quality online experience that attracts and retains users.
• Gathered, documented, and organized requirements from multiple departments and
stakeholders for both product, web, and platform development and promotion.
• Maintained and managed project milestone schedules to ensure that both products and features released on-time and within budget.
• Collaborated with Business Intelligence analysts to establish KPIs and consistently monitor overall website, product, and revenue performance.
• Designed the company’s first microtransaction-based monetization strategy, including the associated store-front blueprints, with the intention of maximizing ARPU and ARPPU.

Another NeoGAF member ‘TheOddOne’ suggested that at least one of those unannounced titles may be a PC bound. According to the LinkedIn of some other employees, there are some free-to-play titles that are being developed by Square enix. 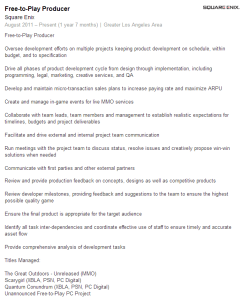 This is a nice surprise as we didn’t believe that we’d see F2P titles from Square Enix. Question now is what are these four unannounced games and for which platforms are they being developed for?