Well, we all know that Sony is holding a meeting tomorrow, in which the Japanese company might reveal Playstation 4. However, we might get some interesting Battlefield news tomorrow during that meeting. That, or Electronic Arts is gearing up for a Battlefield 4 reveal. But stay with us, we have even more news to share. Gamestop’s CEO has revealed that EA has shown him Battlefield 4 and that all he could say after that presentation was a big ‘WOW’. 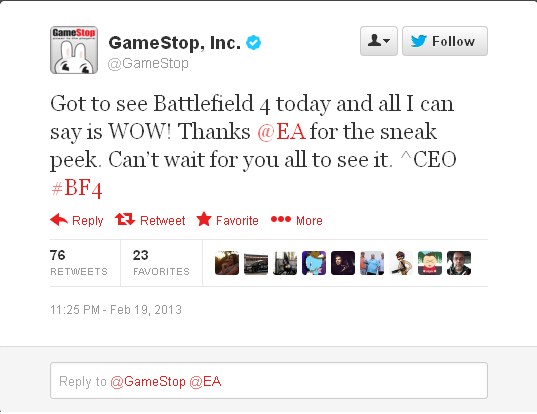 At first, we all thought that this was a trolling message from Gamestop’s CEO. But then again, could the CEO of Gamestop be trolling on Twitter. Nyah, of course not. Still, we were a bit suspicious about this whole thing. And then all hell has broken loose. Origin’s official Twitter confirmed that Battlefield 4 is coming and that it celebrates it with a big BF3 sale. Moreover, the official Battlefield account retweeted Gamestop’s CEO tweet, confirming that this is the real deal. 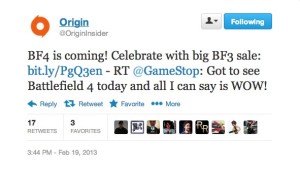 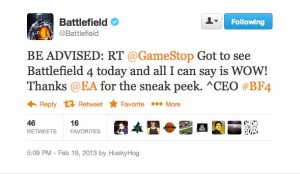 Since Sony will most probably reveal Playstation 4 tomorrow, we might also get a first look at Battlefield 4. Or at least that’s what we hope to. Either way, it’s pretty obvious that Electronic Arts will be revealing this fourth part of the Battlefield franchise in the coming months (or weeks), so stay tuned for more!