Konami Digital Entertainment has revealed that its forthcoming PES 2014 title will mark a new beginning for the popular series, with an all-new engine allowing for the most comprehensive advance for the PES range since its inception.

The PES Productions Team based in Tokyo have been developing a new approach to football for four years and can now confirm their new system uses Kojima Production’s renowned Fox Engine at its core. The team have extended and enhanced Fox Engine to match the bespoke and complex demands of a football title.

Based on six founding standards, the new system has allowed every aspect of PES 2014 to be totally reworked, throwing off the shackles of previous limitations and allowing the PES Productions team to produce a game much closer to their vision of recreating the excitement and variety of a top-level match. The central theme of fluidity is based on the constant moving of players and switching positions which characterises the modern approach to football. PES Productions have looked at how matches ebb and flow, with player individuality key to a team’s success, and well-drilled tactics helping underdogs produce giant-killing feats.

According to its press release, PES Productions have strived to rework every element of play, creating a fresh and energetic new standard for football titles. In addition to noticeably improved graphics and seamless animation, the thrust of the new system’s power has been used to redefine the way football is played on a home system. Gone are the limitations imposed by dated animation systems and AI elements, and instead PES 2014 boasts a central core that perfectly mimics the skill and awareness that elevates the world’s greatest players above their peers.

Six central tenets combine to establish PES 2014 as a new benchmark in football simulations, governing everything from the way the player receives and controls the ball, the physicality of play, and the ‘feel’ of match-day: the rush and euphoria or crushing lows that experiencing an important games can bring. As such, the key pillars on which PES 2014 is based are:

· True B all Tech: For the first time in a football simulation, PES 2014 centres everything on the ball: how it moves, and how players use it. First touch and sublime control are what set certain players apart from others. The ability to not only read a pass, but to be one step ahead and to know what is needed to gain yards on an encroaching defender. TrueBall Tech allows the player to trap or knock on a pass using the analogue stick with detailed barycentric physics determining the weight shift of the player and the height and speed of the pass, as to how the player’s body will automatically shape to receive it.

Thus, the player has total control in determining how their body is angled to receive a pass, whereas previous football titles present the user with scant options. Instead, TrueBall Tech means that it can be chested or nodded past an opponent, flicked into space or to a team mate, while closer dribbling control is a much more personal attribute in the new game.

The PES series has long since treated the ball as an individual entity, allowing the player huge amounts of freedom to pass into space, run on to a knocked-on counter, or produced short triangular passes to make space. TrueBall Tech adds even more freedom, with the player’s movements worked around those of the ball and, unlike any other football title, as opposed to the other way round. Players will be able to truly control the free-moving ball, use its pace or alter its movement to master close control in PES 2014.

The result is a game that offers full 360-degree, two-footed control within several yards around the player. In addition to steering the ball with subtle movements, there is the ability to shield the ball from opposing players, use deft controls to wrong-foot them, and intuitive methods to master close control.

· Motion Animation Stability System (M.A.S.S.): The physical combat between players is a vital part of any match, and the new M.A.S.S. component simulates the bodily contact between multiple players within bespoke animations that segue seamlessly into each other. Rather than a series of preset animations that occur under specific circumstances, M.A.S.S. acts instantly to any situation, with the reaction of a fouled player entirely dependent on the direction and force with which they are tackled. Dependent on factors such as their size and power, players will stumble but instantly recover if clipped, barge others off the ball, and use their stature to block players from possession. Similarly, PES 2014 now has more styles of tackle, as opposed to basic foot in or sliding types.

Tackling also becomes more integral to PES 2014’s quest for realism, with clashes of players utilising the TrueBall physics to ensure the ball reacts as it would in a real game. As players fight for a 50-50 ball, their result challenge will see the ball bobbling into space, or emerging at the feet of the triumphant player.

The integration of the M.A.S.S. element has also facilitated new advances in one-on-one situations. The individual battles between key players can determine the outcome of a match, so particular emphasis has been made on such battles in PES 2014. Defenders will put greater pressure on the attacking player, by tussling for possession, standing back to restrict passing opportunities, or making the tackle. Likewise, attackers are faced with ether trying to outpace the defender while retaining possession, feinting to gain advantage, or passing, dribbling or shooting when space allows. The result allows for incredibly open games, where the attributes and skills of the players come to the fore in personal feuds all over the pitch.

· Heart: Defining what makes football so engrossing is difficult. It isn’t a technical thing, but more an emotional hook. Matches can be imposing for visiting teams, as home support barracks the opposition, and acts as the infamous ‘twelfth man’ by cheering their side on. PES 2014’s ‘Heart aims to recreate the effects of team support, both on an individual player basis and across the entire team.

Each player in the game now employs mental attributes in addition to playing styles and skills, and can be adversely affected when having a poor game. However, if an individual is not playing well, his team mates can rally round and will work to support him. Similarly, one moment of individual brilliance can produce a galvanising effect on team mates. The cauldron effect of a vibrant stadium will showcase the mood of the fans, with all-new sound effects combining with stunning AI systems to create a palpable match day atmosphere.

· PES ID: PES 2013 introduced the Player ID system with which players could instantly recognise a player by their faithfully recreated running and play styles. For PES 2014, that number will be greatly expanded, with twice as many stars featuring bespoke animations and AI.

· Team Play: Via the new game’s innovative Combination Play users can set up a variety of different tactics in key areas of the pitch using three or more players. These players will make very different off-the-ball runs to exploit holes in the defence or midfield, using the flanks, curved runs, or overlapping play to make themselves available. These moves can be preset to key areas of the field, allowing users to exploit defensive weaknesses beforehand.

· The Core: PES Productions have undertaken several years of consultation with PES and football fans to reproduce key elements of the series and implement a wide range of additional improvements.

Visually, the game will benefit from an incredible level of acuity, from the weave of the kits, through to facial movement, and a new animation process that offers slick segues from one move to the next, with no pauses or restrictions on control. Stadia will be faithful to real-life, with the entrances to the pitches recreated, crowds that move during the course of the game The new system also allows for a new light-mapping effect, adding a natural look to the proceedings. The flow of a match has also been improved, with tactical decisions made on the fly, and the removal of cut scenes after specific events.

Free kicks and penalties have also been radically changed. Control over free kicks has been expanded with decoy runs added and short passes now unrestricted. To counter, players can now move the position of their keeper for the kick, while the wall will react to the kick instinctively to block or deflect the ball.

Penalties now use a target guide that is changed according to the kicker’s ability and where they intend to place the ball. The goal keeper can now opt to move ahead of the kick, sensing when the penalty taker is not particularly strong.

PES 2014 will also mark the first appearance of the recently-signed Asia Champions League, adding a wealth of officially licensed clubs to the competition; and the new game will also exclusively retain its use of the UEFA Champions League club competition, with other tournaments expected to be announced shortly.

Further details of PES 2014’s content – including all-new online elements – will follow, but the new game represents a quantum leap from what football fans have been used to.

“Thinking outside the box on an annual series such as PES is not easy, but the Fox Engine has allowed us to develop such a level of freedom that we are constantly realising ways of making PES 2014 a true representation of football. From the moment football fans pick up the controller and experiment with the close control, player movement and get to know how teams work and move, we are confident that they will see a game no longer limited by technology, but capable of growing with them and constantly surprising with the breath-taking quality they have to come to expect from the real thing.”

“All the materials we’re releasing are taken from current platforms and fully in-game, which is at about 70% completion. We want fans to get a true feeling of the actual product they’ll be playing on the consoles most own this year, not some marketing dream. Our new engine and systems are dedicated to the current generation of platforms, which will continue to be dominant in the market, but are fully scalable for future versions.”

In other words, no news yet about a next-gen version of PES 2014. 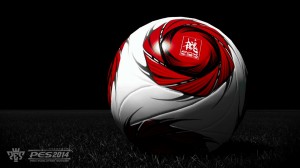 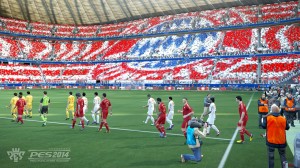 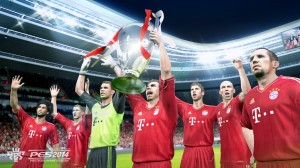 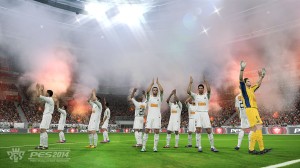